Who's Afraid of Virginia Woolf - 60 years on 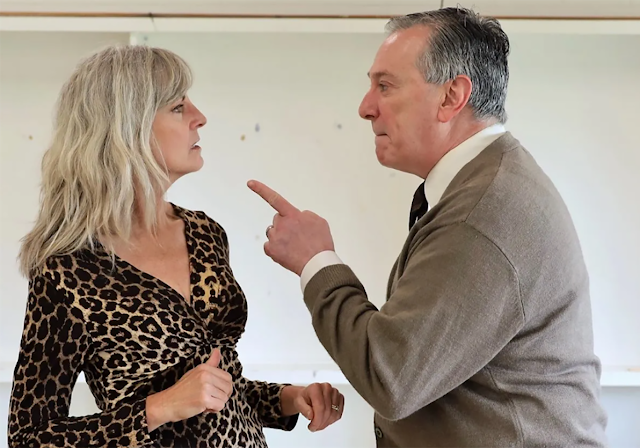 Andrea Close and Michael Sparks as Martha and George

Upon being asked to review this show, my first thought was: “Why is this play being mounted here and now?”

Edward Albee’s “Who's Afraid of Virginia Woolf?” is now 60 years old. It’s an American play about a jaded, middle-aged academic and his alcoholic wife who terrorize a younger couple throughout a night of heavy drinking. It’s best known to many of us from the acclaimed 1964 movie starring Elizabeth Taylor and her twice married and divorced husband Richard Burton.

From its opening scenes, this cleverly-staged production brought the brilliance and dark hilarity of Albee’s text to life.

Andrea Close as Martha owned her role with wit and swagger while and Michael Sparks as George was in equal parts a dryly comic victim and a cruel aggressor.

The younger couple, Nick (Joshua Wiseman) and Honey, (Karina Hudson) were well cast and worthy opponents in the various drunken psychological games played throughout the night: humiliate the host; hump the hostess; get the guests; and bringing up baby.

The entire story is set in one room. Director and set designer, Cate Clelland made good use of the wooden floors at the Hub to create an authentic, loungeroom feel. Seating the audience in raised rows on three sides of the action brought a sense of intimacy to the space and heightened voyeurism to the audience experience.

Strong physical performances and confident direction ensured that energy ebbed and flowed throughout the show. At times, characters would turn away from the action and toward the audience allowing us close-up glimpses into their emotional state.

The text of “Who's Afraid of Virginia Woolf?” Is surprisingly fresh. During one of the two intervals (it’s a long show), I heard someone remark on how relevant it is to Australian society today. To me this begs the question of why it was performed in assumed American accents.

The voicework was a highlight, particularly in the female characters. Assumed accents are almost invariably uneven and in this case, they detracted rather than added to the fine work on stage.

Of the three shows I have reviewed so far at the ACT Hub only one was written this century and two were performed in assumed American accents.

With the high level of skill and dedication involved in the ACT Hub, I hope our local companies can be more adventurous in future programming.

This review was first published in Canberra City News