THE PHANTOM OF THE OPERA - Sydney Opera House 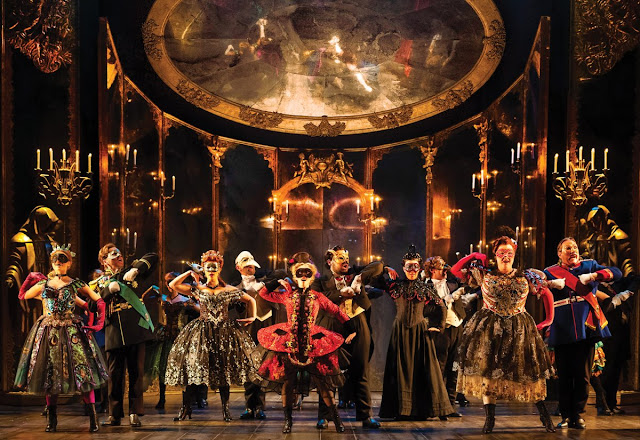 Australian production directed by Seth Sklar-Heyne for Opera Australia and The Really Useful Group in association with Cameron Mackintosh.

It’s rather note-worthy that Sydney is currently playing host to two Cameron Mackintosh productions of classic musicals in “Mary Poppins” and “The Phantom Of The Opera”.

Both productions have been revised and updated to take advantage of advances in technology which now make it possible to tour them more widely than before, and therefore more available to even wider audiences who never had the chance to see the original productions.

In the case of “Phantom of the Opera”, Sydney audiences were treated to a spectacular outdoor production earlier in the year in the Handa Opera On Sydney Harbour series, for which Director, Simon Phillips and designer Gabriella Tylesova’s were given carte blanche to devise a completely new production. A task they achieved with spectacular success.

So when Opera Australia announced it would also stage “Phantom of the Opera” in the Sydney Opera House later this year, there was a hope that this might be a return to the original Harold Prince production first seen in Australia in 1990.

The London production, though still allegedly the original Hal Prince production, has been described by critics as “a pale shadow of its original self “. The reason being that during the pandemic, the original was stripped out of the theatre and the set replaced with a new cheaper version with the orchestra halved from 27 players to just 14. Broadway, where the show has been running since 1988, is now the only place where the original Hal Prince production can be seen in its full glory as originally conceived.

This version just unveiled in the Sydney opera house, is the ‘new’ Laurence Connor touring version which has been touring the U.K and U.S. since 2012 and now restaged for Opera Australia by Seth Sklar-Heyn, who’s been associated with this version since its inception. Sklar-Heyn has taken advantage of opportunities offered by this season in the Sydney Opera House to devise some of his own enhancements including perhaps the most spectacular chandelier drop to date.

But of course “Phantom of the Opera” is not all about the chandelier. Therefore, although still impressive, Connor’s vision for this show is rather less opulent than the Hal Prince original, concentrating more on the story-telling than the packaging. It features a versatile new setting designed by Paul Brown of which the most memorable feature are  the daunting steps which appear one by one out of the shadows as the Phantom leads Christine down to his lair. 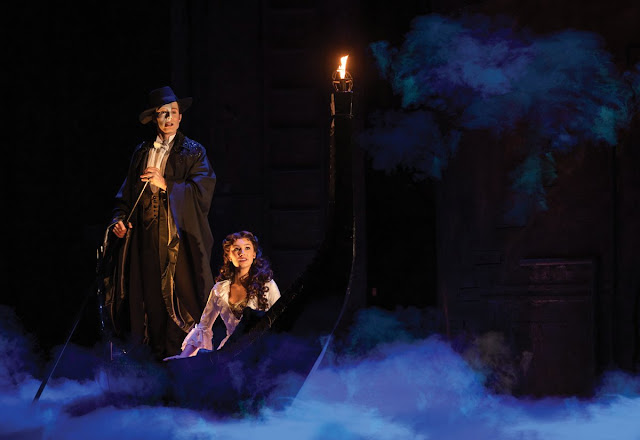 Candles no longer emerge as their gondola glides through the fog, and the Phantom’s lair under the opera house feels a bit more sparsely furnished. The grand staircase for the “Masquerade” scene has been jettisoned, and that scene is now staged on a flat ballroom floor. That scene still remains spectacular mainly because this production retains the original costume design by the late Maria Bjornson, although re-interpreted for this production under the watchful eye of Jill Parker who began her career assisting Bjornson.

Thankfully too, this production also retains the full orchestra; conducted by Anthony Barnhill.  Under his experienced guidance the arrangements remain rich and thrilling. So much so that many of the first-night audience stayed in their seats after the final curtain to savour the lush play-out music.

Having already performed the role of The Phantom in the West End production, Josh Piterman gives a striking, authoritative star performance as the character with a penchant for coercive control who doesn’t hesitate to resort to murder to achieve his desire to have his young protégé, Christine Daae, sing the lead in his devilishly difficult opera. Piterman’s singing is masterful, his acting persuasive, even managing to extract sympathy for the Phantom’s predicament in his final scenes.

Matching him as the young dancer who unwittingly finds herself the object of the Phantom’s obsession, Australian-American soprano, Amy Manford, has also played this role on the West End. Possessing a beautiful singing voice, graceful presence and refined acting skills, Manford is perfect casting for the role, creating a less compliant Christine than usual, and wearing her many beautiful costumes with flair.

As Raoul, the Vicomte de Chagny, who’s in love with Christine and who almost becomes another victim of the Phantom while attempting to rescue her from the Phantom’s clutches, Blake Bowden also impresses with his fine voice and presence in the role.

Giuseppina Grech as the flighty diva, Carlotta Guidicelli, and Paul Tabone, as her tenor, Ubaldo Piangi, not only sing superbly but  delight with their comedic skills, while David Whitney and Andy Morton clearly revel in their roles as the unfortunate new managers of the opera company.  Jayde Westaby as the mysterious ballet mistress, Madame Giry, and Mietta White as her daughter Meg, both offer compelling characterisations to round out an outstanding supporting cast.

So while this new iteration may not replace treasured memories of the original production for those with long memories, it certainly proved thrilling enough on opening night to evoke a spontaneous standing ovation from an excited audience eager to create its own memories of a one of the longest running musicals of all time.