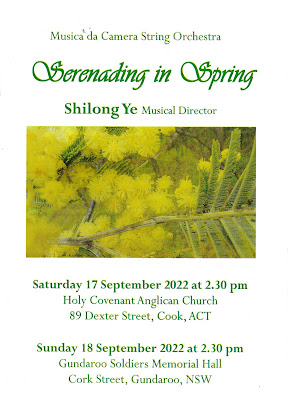 With “Serenading in Spring”, Musica Da Camera String Orchestra presented a particularly well-chosen program of works that were uplifting, refreshing, joyful and optimistic.  It created the perfect mood for this time of year as we leave the dark and cold of winter behind and embrace the glories of spring with, hopefully, the end of the pandemic in sight as well.

The program featured music by Bartók, Delius, Volkmann, Glazunov and Nielsen.  The conductor, Shilong Ye, achieved a high standard of disciplined and sensitive playing by the orchestra throughout the concert.

Béla Bartók’s “Romanian Folk Dances” were given a bright performance to start the program.  These six dances, based on seven tunes from Transylvania, were melodious and dramatic.  Images of peasants frolicking and rejoicing at the start of spring easily came to mind.

“Two Aquarelles” (Two Songs to be Sung of A Summer Night on the Water) by Frederick Delius were composed in 1917 and arranged for string orchestra in 1932 by Eric Fenby.  The first part has a dream-like quality which the orchestra captured with delicacy and feeling.  The second part is more joyful but still retains a reflective quality and it was played with great sensitivity.


The music of Friedrich Robert Volkmann was most popular prior to World War I.  His “Serenade For String Orchestra No. 2” is a lush, romantic piece, full of varying moods.  The orchestra played this work particularly well, giving it a pleasing depth of feeling.

After a short interval, “Theme and Variations for String Orchestra Op. 97” by Alexander Glazunov was played.  Composed in 1918, the variations around the opening theme produce an enjoyable, melodic work of great interest.  It was also well-played.

The final work on the program was Carl Nielsen’s “Suite For Strings Op. 1”.  The orchestra played the three distinct parts of this work again with notable sensitivity.

The changing spring weather of sunshine one minute and showers the next through the large church windows behind the players added extra atmosphere to a highly pleasing and thoughtful music program.

This review was first published in the Canberra CityNews digital edition of 18 September 2022.

Len Power's reviews are also broadcast on Artsound FM 92.7 in the ‘Arts Cafe’, ‘Arts About’ and 'Classical Mood' programs and published in his blog 'Just Power Writing' at https://justpowerwriting.blogspot.com/.

Posted by Canberra Critics Circle at 9:49 AM