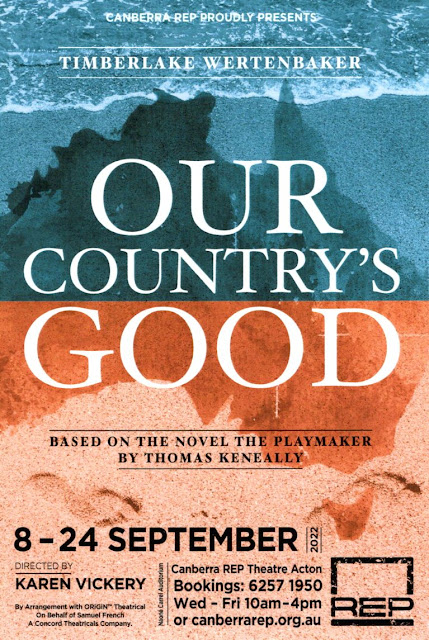 Our Country’s Good by Timberlake Wertenbaker, based on the novel The Playmaker by Tom Keneally.  Canberra REP Theatre, September 8-24 2022.

Virtually every word Tom Keneally has ever written has suggested meanings and implications beyond the obvious.  In this work his original title tells us that Second Lieutenant Ralph Clark is not only putting on a stage play – The Recruiting Officer – but is making a move to change society for the better.  In his speech to his actors as they are about to perform, he emphasises that they must be entertaining, and intelligible.

George Farquhar’s 1706 comedy about the social and sexual exploits of army officers was still so popular that in 1789 in Australia – at the time of the First Fleet invading Eora Country to create the Penal Colony of New South Wales – Clark had at hand two copies of the play and a supply of convicts, sent down for 7 years’ exile, for actors.  The play would entertain his fellow officers, while perhaps educating the often-illiterate convicts and thus improve their future prospects.

The title of the play, adapted from Keneally’s 1987 novel by Wertenbaker for its first staging at the Royal Court Theatre, London in 1988, captures the irony of the convicts being removed from England – for that country’s good – while the putting on of the satirical comedy by those convicts was for our country’s good – that is for the Australia which the penal colony became.

Without a doubt, REP’s putting on this play after another 30-odd years, is absolutely relevant as the issues of the treatment of women and indigenous people, and the misuse of military force and the acceptance of violent behaviour are just as disturbing today as they were in 1988 and 1789.  Karen Vickery’s directing of Our Country’s Good is as important now for us in Canberra – the capital of Australia – as was Max Stafford-Clark’s 1988 production in London – the capital of the United Kingdom which has just put on such an overwhelming performance to memorialise the late Queen Elizabeth II – and as was the presentation of The Recruiting Officer, recorded in the diary of Watkin Tench and published in his Narrative of the Expedition to Botany Bay in 1789.

Wikipedia records “The play shows the class system in the convict camp and discusses themes such as sexuality, punishment, the Georgian judicial system, and the idea that it is possible for ‘theatre to be a humanising force’”.  We may wonder about our past in the days of George III and the future of Charles III, William V and George VII.  With all this history behind and before us, does REP’s production of Our Country’s Good stand up strong enough?

On the whole it does, but in one part it needs improvement.  I was unable to see the show until late in its run, and felt disappointed there was not a full house last night.  Competition from the late Queen’s funeral may have been a factor; or perhaps it was the lack of clarity of the speech of several performers that kept audience numbers lower rather than building.  It was Second Lieutenant Ralph Clark that sparked my concern: not all the performance was “intelligible”.

Our Country’s Good succeeded in its essentials, where Vickery’s direction of the action and mood, and characterisation, made us come to grips with the reality of people being whipped with 100 lashes, and even 300 lashes; with the impossibility of true justice when death by hanging was the standard; when trauma destroys relationships; and laughter at is so different from laughter with.

But I found, in attempting to represent the characters through their vocal accents from the many different parts of Britain that the real convicts came from (I recognised at least Devon or Somerset, possibly Scottish and Cockney) very often I could not understand the actual words being spoken.  Often, too, in presenting the agressiveness especially in the male characters, voices could sound like barking angry mastiff dogs – which certainly got the feeling through – but the actual words and what the character, and Tom Keneally, meant was lost in action.

It was understandable that I would have had to listen hard to the character from Madagascar (Black Caesar), and Gaurav Pant succeeded in his speech about wanting to die in his own country, and not in Australia, in making a stand for indigenous people, even though the reasonable decision had been made to leave out Keneally’s original unnamed character, An Aboriginal Australian.  In her Director’s Note, Vickery writes “With the passage of 34 years the representation of our First Peoples in the play is problematic, even tokenistic”, after she consulted with Aboriginal and Torres Strait artists.

I think, on reflection, that more scenes could have gained from clearer articulation of the words, including particularly for the ‘barking’ parts of the Major and the Captain, to create more subtlety of emotion for us to respond to.  Scenes that were the strongest for me were when Liz is measured up for hanging; where she finally decides to speak in her own defence; and those emotional scenes between Harry Brewer and Duckling Smith.

A notable success in this production was the set design which worked so well without the need for changes for so many different settings – which is also praise for the directing of movement, exits and entrances, with complex lighting which shifted our imaginations smoothly from scene to scene.

Overall then this production of a demanding play achieves the key intention of Tom Keneally, which the original director and writer/adaptor described after seeing a play performed in Wormwood Scrubs prison: “in prison conditions, theatre can be hugely heartening and influential … and we saw immediately how doing a play could become absolutely absorbing if you were incarcerated”.  Like the convicts they observed, we “were, at least momentarily, civilised human beings”.
[  https://en.wikipedia.org/wiki/Our_Country%27s_Good  ]