WHO'S AFRAID OF VIRGINIA WOOLF


At the close of Act One of Edward Albee’s Who’s Afraid of Virginia Woolf  a single spot beams down on university history professor George, standing alone in the centre of the living room of his university residence. Slowly a self-satisfied smirk of one-upmanship curls about his lips. Albee’s masterpiece of psychological sado-masochism, played out by middle-aged George and his vituperative wife, Martha, the privileged daughter of the university president erupts into a bitter and spiteful game of dog eat dog  accusation and reciprocal recrimination. It is a game honed to painful perfection over years of combative and interdependent marriage. It is a vicious and destructive game in which George (Michael Sparks) and Martha (Andrea Close) clearly know the rules, interchanging the roles of victim and oppressor with instinctive, well-practised domination. It would be simple to regard Albee’s brilliantly insightful and laser sharp text as a cynical condemnation of matrimonial discord. 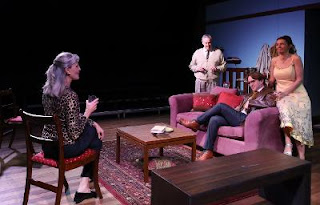 Fortunately and to the immense credit of director Cate Clelland’s perceptive sensitivity for subtlety and nuance, Free Rain Theatre’s revival of Who’s Afraid of Virginia Woolf probes a deeper and more profound psyche. Clelland and her cast and creative team have produced a tour de force theatrical triumph, a masterclass in acting and a resounding tribute to the late playwright’s grasp of human nature within the cloistered confines of the refined world of academia. It echoes again the critical analysis of university life in C.P. Snow’s seminal work Two Cultures.

George and Martha’s cathartic ritual of self-deprecation and abusive exploitation takes on a more sinister impact with the arrival of newly arrived biology professor Nick (Josh Wiseman) and his young wife Honey (Karina Hudson). The older couple have invited the newbies back for late night drinks after attending a function hosted by Martha’s authoritative father.  The unwitting flies are lured menacingly into the spiders’ intricately woven web of painful secrets and dangerous vulnerabilities. 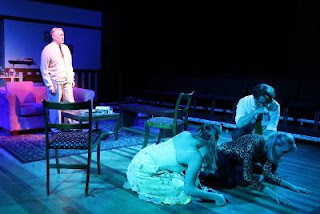 Before they know it and fuelled by excessive alcohol and the weariness of the late night advance to the dawn, Nick and Honey find themselves as the pawns within George and Martha’s game. George and Martha continue their scathing attacks upon each other while drawing out their guest’s dark and private secrets as weapons to be used to humiliate and intimidate. The young couple, unused to such self-flagellation and vitriolic argument find departure impossible as the web tightens and resentment and defensiveness build. Honey’s Innocence is drowned in a sea of brandy and vomit while Nick is shattered by the  brutal exposure of his impotence. As the game plays out, Nick and Honey find themselves irrevocably embroiled in the cruel rules of Humiliate the Host, Hump the Hostess, Get the Guests and Bringing Up Baby. Lies are revealed, truths are exposed. Nick and Honey depart forever changed as they walk out into the cold New England air, leaving George and Martha in a comforting embrace. George is gently singing “Who’s Afraid of Virginia Woolf..Virginia Woolf…Virginia Woolf.”

Albee’s emotionally harrowing microscopic play demands the finest performances from actors who are at the top of their game. Cate Clelland’s cast present an extraordinary rollercoaster  ride of emotional polarity. Sparks strides the chasm of meek intimidation to vicious accusation. Close spits her vituperative insults in one instant while wailing with heart rending despair at George’s cruel torment. Hudson gives an extraordinary performance of the fragile, slim hipped Honey, one moment spitting with hysterical spite and another withdrawing into and alcoholic haze. Wiseman skirts the perilous path of bright young cocky confidence of his privileged position and his sexual and intellectual inferiority. Clelland’s casting is superb and her actors give performances that are equal to the very best at Canberra’s new performance venue ACT HUB. 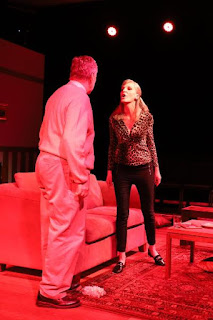 If you have seen Free Rain’s outstanding revival of “Who’s Afraid of Virginia Wollf” you have been fortunate enough to see a production that deserves the highest accolades. If you haven’t and there is time before the short season comes to an all too soon close on Saturday, then don’t delay. This is truly unmissable theatre.It deserves packed houses and extended runs, but alas, I fear that it will be over all too soon and too many lovers of theatre and students of acting will have missed out. It deserves to be on a mainsage, playing to a packed and glued to their seat audience.

This production is another ACT HUB gem that will sparkle in the memory long after the lights go down.