“How to Vote” captures hard to reach demographic

“How to Vote! Or, the repercussions of political ambition and personal rivalries within student leadership and media organisations in the context of the post-COVID-19 neoliberal university institution.” 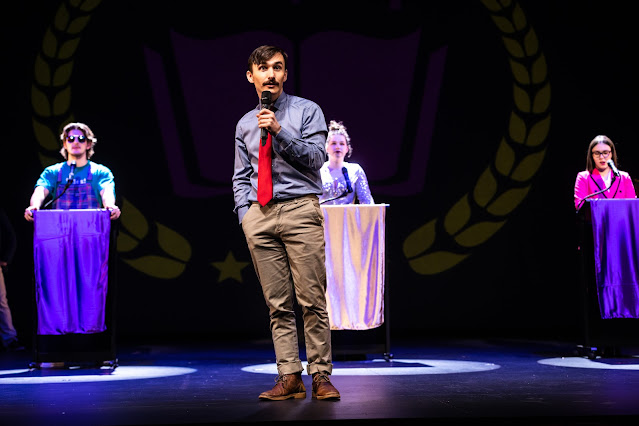 How to Vote is an ambitious new work by Australian playwright, Julian Larnach, commissioned by Canberra Youth Theatre (CYT) as part of their 50-year anniversary season.

How to Vote’s plot centres around a student election at an elite, sandstone university. It’s a comedy about politics, power, ambition and self-interest. This show was developed over 24 months and performed by a cast of over 25 actors, most of whom are of university age.

It was not your usual Canberra Theatre crowd. Most of the audience was around the same age as the performers and the sea of grey hair was largely absent.

The subject matter is fitting fodder for players who may have cast their first real-world votes in the recent federal election.

Larnach holds a Bachelor of Arts in Government and International Relations from the University of Sydney. His depiction of machinations of electioneering is deft and clever, informed by both his education and his personal experience of student journalism and politics.

When the incumbent student president, who is recovering from a recent psychological breakdown, decides not to run in an upcoming election, three candidates campaign for the job. They are: elite, conservative, Giles (Matt White), left wing social justice warrior, Lizzie (Caitlin Baker), and single-issue candidate Mon (Ella Buckley).

Giles and Lizzie both campaign to their natural supporters but they (and their treacherous advisors) soon realise that they need more votes. Each side tries to appeal to the missing middle of disengaged voters and in so doing, sacrifices their authenticity and credibility. Sound familiar?

Only Mon, who campaigns to fill a hole near the university bus-stop that caused her to break her ankle, stays on message. Like the Greens in the recent federal election, her consistency and tenacity strike a chord with the young voters.

Various characters interact with a large, phone-shaped screen in scenes of long-distance love; clandestine online dating; and even a cameo from the actual Minister for the Arts.

There are many characters as befits a large cast. The narratives in the first part of the show could be tightened. Characters face challenges and but we never have the sense that there is much at stake for them.

Nonetheless, there’s plenty of laughing out loud from the audience.

No character is entirely good or evil (with the possible exception of the Vice Chancellor) and the show  maintains a refreshing political neutrality.

There is a welcome interval at the 90 minute mark and the second half of the show is shorter and tighter.

CYT have clearly built a strong engagement with 18-25 year-olds who are a notoriously hard to reach demographic (just ask TripleJ).

It’s great to see new, young artists and audiences in our beloved Playhouse Theatre for this latest instalment in CYT’s 50-year anniversary season.