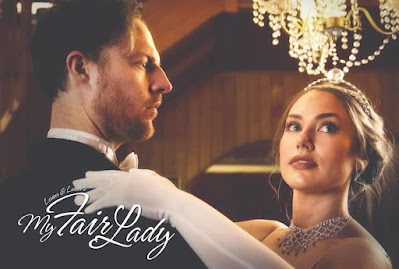 At the Q Theatre, Queanbeyan to 25 September

The musical, ‘My Fair Lady’, which opened on Broadway in 1956, was the phenomenon of its era.  It became the longest running musical ever until overtaken by shows such as ‘Cats’ and ‘The Phantom of the Opera’.  A perennial favourite, it continues to be revived around the world.

This story of a cockney flower girl, Eliza Doolittle, whose rough speech and manners are transformed by phonetician, Henry Higgins, and who is presented at Court as a refined upper-class young lady, retains the spirit and social comment of George Bernard Shaw’s play, ‘Pygmalion’, on which it is based.

The director of this new production, Anne Somes, has a fine cast of principal players and chorus who sing, act and dance the show with enthusiasm and skill.

As Henry Higgins, D.G. Maloney shows a great understanding of all aspects of his role as the blustering and uncaring phonetician who gets his come-uppance.  He sings and acts the role very well and performs with great energy, wit and charm.

Stephanie Bailey is a beautiful and delightful Eliza Doolittle.  She sings the role very well, especially her songs,  'Wouldn't It Be Loverly', ‘I Could Have Danced All Night’ and ‘Just You Wait’.  Her transformation from Cockney flower girl to refined lady is quite believable.


Pat Gallagher expertly captures the character and warmth of old Colonel Pickering.  His fine singing of the fast-paced ‘You Did It’ was notable for his clarity of diction.

Pippin Carroll gave a finely-etched characterisation of the young, love-sick Freddy Eynsford-Hill.  His passionate singing of ‘On The Street Where You Live’ deservedly stopped the show.


As Alfred P. Doolittle, Eliza’s roguish father, Isaac Gordon was superb in ‘Get Me To The Church on Time’.  Dancing and singing with wit and energy, he commanded the stage.  Alice Ferguson as Mrs. Higgins, Henry’s mother, deftly displayed her exasperation with her son.  Her excellent comic timing made her every laugh line count.

There were also good performances from Cameron Taylor as Higgins’ former student and rival, Zoltan Karpathy, and Jill Young as the sorely-tested and patient housekeeper, Mrs Pearce.

The orchestra under the baton of Alexander Unikowski played the lush score very well and Michelle Heine’s choreography captured the spirit of the period.  Her setting of ‘Get Me To The Church On Time’ was particularly well done.

The many costumes by Fiona Leach were eye-catching, showing a good understanding of clothes in that period.  The costumes for the Ascot Races and Embassy Ball scenes were especially fine.

This strong and winning company gave one of the best musicals ever written a very enjoyable and memorable performance.