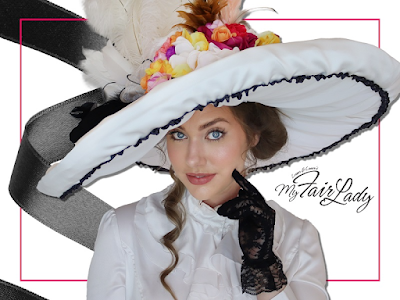 I have often remarked on the very high standard of music theatre produced by local companies in the ACT. From Dramatic Productions in Gungahlin to Canberra Philharmonic in Erindale and from the Canberra Theatre to The Q in Queananbeyan. A leading flagbearer of this genre is Free Rain Theatre Company under the artistic direction of the indefatigable Anne Somes. Even Covid could not prevent Somes from struggling through to present acclaimed productions of Mama Mia and Priscilla Queen of the Desert.

For her latest foray into the wonderful world of musicals, Somes returns to Hollywood’s Golden Age of the Musical with a heart-warming and uplifting production of Lerner and Loewe’s classic favourite My Fair Lady. Based on George Bernard Shaw’s hefty comment on the British class system, Pygmalion, Lerner and Loewe have created a sentimental, lyrical adaptation of Shaw’s more critical condemnation of middle class morality. It is to the credit of director Somes and her highly accomplished company that the saccharine pitfalls of glossy entertainment are avoided, while presenting a wonderfully entertaining performance that maintains the musical’s adherence to Shaw’s political and social intent.

From the opening strains of the overture under maestro Alexander Unikowski’s forceful musical direction, it is immediately obvious that Free Rain’s production is designed to compel attention.  And as the action unfolds I am magically drawn into  My Fair Lady ‘s spell that has enchanted audiences since it was first produced on Broadway in 1956 and before the film version in 1964. Without the financial resources to stage an elaborate setting, set designer Cate Clelland has opted for cartoon represented projections  to suggest the different settings and locations, such as Higgins’s library or Wimpole Street. It is an effective alternative to the budget demands of a realistic setting and lends the production an appropriate representational quality that focuses our attention on the staging and the performances.

Somes and her production team faithfully capture the style of the period, magnificently realized in costume designer Fiona Leach’s impeccable attention to the Edwardian period, conjuring the style of the cockneys of Covent Garden to the servants of Wimpole Street and the upperclass fashions on parade at Ascot. Michelle Heine’s choreography pays careful attention to the spirited revelry of the pub scene before Doolittle’s wedding, the graceful waltz of the ball scene and the stylish tableaus of the fashionably dressed race-goers. The devil is in the detail and Free Rain’s production of the classic musical transports us to British society in 1913, while enabling us to perceive  through Shaw’s characters a society that remains prevalent to this day. It is a musical that still speaks to our time, especially at a time of change and renewed talk of republicanism.

Of course none of this relevance would be significant without the outstanding performances by Somes’ cast, principals and chorus alike. Central to this are the performances of flower girl Eliza Doolittle, trained to be a lady of upper society by  misogynistic, confirmed bachelor and linguistics expert Professor Henry Higgins.  Somes has cast two exceptional performers in the lead roles. Stephanie Bailey breathes fresh life into the challenging role of Eliza as she transforms from a lowly flower girl to the belle of the ball. I felt that I was watching Julie Andrews during her soaring rendition of I could have danced all night. In a performance of impressive range and superlative singing, Bailey also captures the fiery spirit and instinctive survival of Shaw’s heroine. D.G. Maloney effectively presents the narcissism and self- righteousness of the arrogant professor while subjecting himself to self-awareness with the revelatory pathos of I’ve grown accustomed to her face,  so beautifully contrasted by Bailey’s Just You Wait Henry Higgins. Shaw’s ending suggests that Eliza will marry Freddy Eynsford-Hill (Pippin Carroll). Lerner and Loewe suggest that a happy ending would be her return to Higgins. Somes clearly demonstrates that Eliza returns to a changed Higgins, assuming a position of authority at the top of the stairs. It is a fitting conclusion for a modern woman!

Somes has scored a jackpot with two leading actors and singers who lend this production star quality that at least equals if not outshines Julie Andrews and Rex Harrison. A wild gambit statement I know, but judge for yourselves. There are other gems in this wonderfully nostalgic production. Isaac Gordon’s Dooloittle is a vaudevillian tour de force and Somes, Heine and Unikowski make the pub scene before the wedding a highlight of the show in the tradition of Nancy’s Oompapa from Bart’s Oliver. All the ensemble scenes burst into life and give this lively production a swathe of colour and movement to please the ear and delight the eye. Pippin Carroll’s lapdog. lovesick On the Street Where You Live melts the heart of every sentimentalist. Pat Gallagher strikes the right note as the older bachelor and companion whose age lends a gentility to his courtesy. Although You did it does suggest that he has let his understanding down. That notwithstanding, Gallagher’s Colonel Pickering is an entirely convincing character. The voice of reason and support belongs to Jill Young’s housekeeper Mrs, Pearce, steadfast and true throughout. Alice Ferguson captures the tone of high society’s Mrs, Higgins but her posture belies her authority and elegance. A more statuesque  elegance would have complemented her dialogue.

Free Rain has once again produced a musical theatre gem that sparkles with the glitter of talent and the heart of nostalgia. There is a soothing, heart-warming quality to this revival of the Lerner and Lowe musical as well as a critical insight into Shaw’s Fabian views with a contemporary relevance that should not be ignored. Catch the production before it closes and judge for yourselves. You will be happily entertained and provoked.