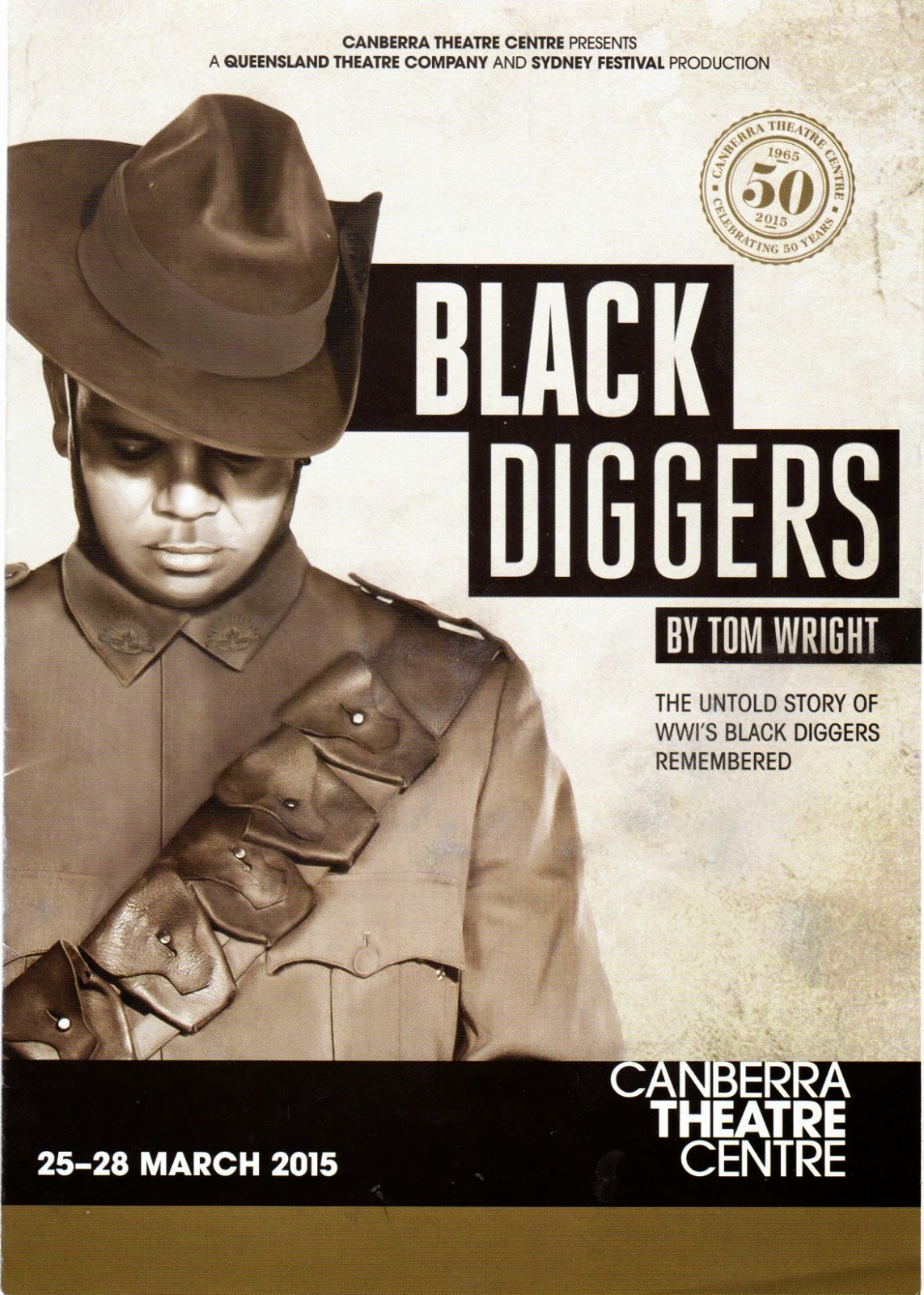 Seeing Black Diggers for the second time, a year apart, has brought home to me the power and the importance of this play.  In the Canberra Playhouse the impact was even greater than in the Sydney Opera House Drama Theatre – so much so that I could not write about this presentation immediately afterwards.  Tears and anger meant I needed time (and luckily a day at the beach) to recover my composure.

It is time now to reconsider the status of this work.  Rather than thinking of it as a play, we should recognise it as ceremony – not just ‘a ceremony’, but as a ritual required of us all to observe.

Every year, as an essential element of the ANZAC commemoration, Black Diggers should be performed – by Indigenous people – to mark their sacrifice, made in the name of Australian equality.  Drama has been created and performed from ancient times in the traditions of all of the hundreds of cultures in the backgrounds of our Australian people, not to glorify the past but to seek truth and honesty.

Think of the great work by Sophocles, Antigone, where the King Creon says to the Prophet Teiresias, I say all prophets seek their own advantage.  Teiresias replies, All kings, say I, seek gain unrighteously.  Why, you may ask, should the Athenians, having established democratic decision-making by the time Sophocles was born in 496 BCE, select this work for performance in, probably, the annual festival of 442 or 441?  Because we must not forget the past, and must maintain an honest understanding of what has happened.  As Antigone shows, Creon’s biassed judgement of ‘all prophets’ seeking their own advantage was not true of Teiresias, but Teiresias’ judgement of ‘all kings’ seeking gain unrighteously was also not true of Creon.  Tragedy resulted because Teiresias’ prophecy was true, while Creon’s decision which caused disaster was, in his mind, righteous.

Black Diggers raises such questions for us to need to face up to, on an annual basis and in the context of what happened to those men in World War I and after they – not all of them – came home.  The truth is tragic.  The drama reminds us that those of us who became the decision-makers allowed equality to rule in the trenches on Flanders Field, but failed to understand the importance of that experience and the absolute need for equality to rule at home in peace-time.

A century later we are still not through with this sorry business.  We require Black Diggers to get back on track, and we need to see the signpost each year as we remember and value all those who fought for Australia.   I hope that the Australian War Memorial can bring to centre stage the ‘small, hand-built memorial that commemorated the First World War Aboriginal servicemen’ which the designer Stephen Curtis was taken to see by the Memorial’s Indigenous guides ‘up on the hill behind the museum.’

I suggest that Black Diggers become the central work performed leading up to the Last Post ceremony, which is the key to the powerful effect of the play.