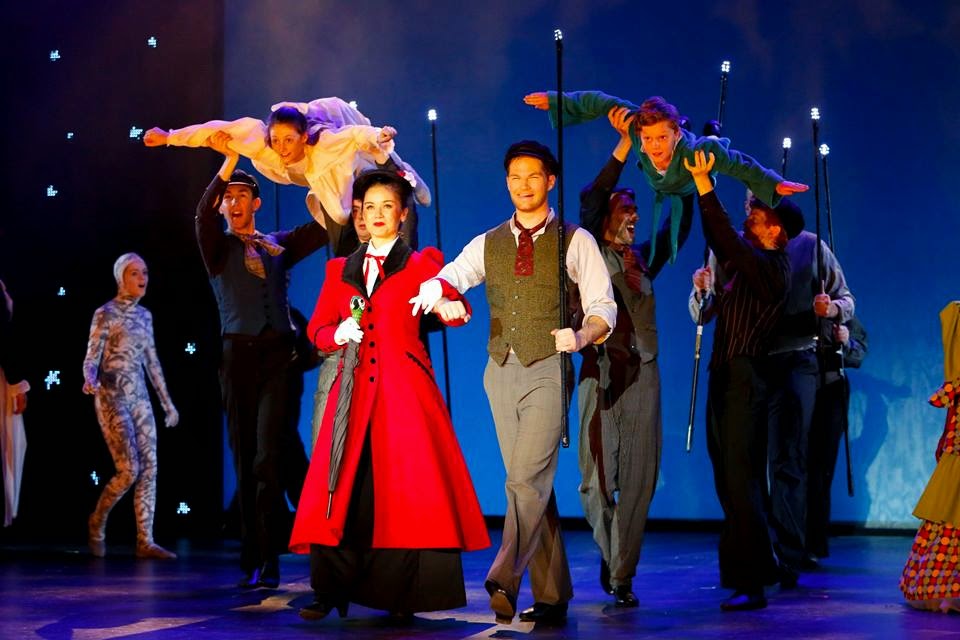 "Brimstone and treacle!" A spoon full of sugar!" Mary Poppins (Alinta Chidzey) has left her children to teach them a lesson, and in her absence the family has recruited Miss Andrew (Bronwyn Sullivan), the legendary "holy terror" responsible for raising most of the bankers in London. Miss Andrew's cruel brimstone and treacle regimen outrages Miss Poppins, and the pair battle in song over their competing methods of delivering medicine. For raising children always involves some sort of medicine, whether physical or spiritual, and how kindly or cruelly it is given shapes the destiny of the adult.

Fortunately Free Rain's production of Mary Poppins (director Stephen Colyer) is no bitter pill, but a joyful experience from start to finish. This musical is a reworking of the Disney movie with some elements from the books folded in. The Banks children are now mildly bratty, and the lessons Mary Poppins has to teach them have real weight. And of course now Mary Poppins has a showdown with her ideological opposite Miss Andrews, the nanny responsible for mis-raising Mr. Banks himself. The extra backstory makes for a more satisfying narrative, with Mary righting some old wrongs.

Alinta Chidzey shines in the title role: prim, firm and "practically perfect in every way" (except, of course, for a total lack of anything resembling humility). Shaun Rennie is a match for her as jack of all trades Bert. Both are excellent dancers and lead the cast in many lively numbers, although the tap-dancing "dancing on the rooftops" is a particular highlight, with Burt taking to the air with some slightly death-defying wirework. The other cast all deliver spot-on characterisations, in particular Colin Milner and Christine Wallace as Mr. & Mrs. Banks, who provide an important connection with reality. Bringing statues to life is easy work - securing the financial security of a family is considerably tougher, but fortunately the omnipotent Miss Poppins is more than up to the task.

But inevitably, the true stars of the show are Jane (Victoria Hunt and Georgia Forster) and Michael Banks (Jake Keen and Callum Doherty), the two children in need of a nanny. While the children alternate performances, the pair I saw made a meal of their parts with moments of mischief balanced with more sober moments as under Mary's tutelage they start to grow up.

The only thing that stops this show from being perfect is its cost - the cheapest tickets are $55 rising progressively up to $100 for the very best seats. That's a stiff demand for an amateur show (with the exception of the director and the two leads. who are professional). Unfortunately the show's complex wirework does require the Canberra Theatre, and the high cost of rights to the show further pumps the price. The price is justified by the quality of the show, but this is still an expensive night out.

With its hybrid professional-amateur shows (which began with Phantom of the Opera), Free Rain seems to be in the process of morphing from an amateur group to a professional production company. At the moment it is awkwardly positioned, with only some actors being paid for their work - hopefully this will change in the future. However Free Rain is also at the forefront of raising quality.  Mary Poppins sets a new standard not just for Free Rain, but for musical theatre in Canberra. No spoonfuls of sugar are needed here - Mary Poppins is a delight.