The stately dining room of Ayers House on Adelaide’s North Terrace with its elaborately embossed ceiling and portraits of Matthew Flinders and Charles Sturt upon the walls lends a genteel air to Bob Kingdom’s delicious piece of Salon Theatre. The sound of jazz sweeps through the room, cool and sophisticated in its sound. It segues smoothly into classical music from long ago and an audience of mostly mature years sits expectantly on wooden seats in rows upon the wooden floor. A door opens slowly and he appears, the familiar brushed back mop of hair, the flat and boyish face, though now no longer young and lined with the journey of the years. His evening dress, complete with bowtie befits a man upon a lecture tour, yet far removed from the casual clothing of the seaside Swansea lad. It. is Dylan Thomas who now appears before us and steps up to the lectern that appears to tower above his short stature of five foot six and a half.
For an instant I gaze in misbelief. The likeness is uncanny, and yet I know that Thomas has been long gone and this is actor, Bob Kingdom in his guise. He welcomes culture vultures to his reminiscences of the past, of times spent with family and friends and the characters that people his stories, poems and dramas. The Welsh lilt sings with mellifluous tones the rhythms and sounds of his works, enveloping the characters in the family home, at the local pub, and in the houses, streets and familiar locales of his native land. The wry, dry wit slips from his lips. “Do you know that TS Eliot backwards spells toilets?” TS backwards is St. Could it be St. Eliot” or “If every hermaphrodite were a schizophrenic, which half would you take?” “Stop the bus” the old man cries. “I’ve left my teeth on the mantelpiece!” and that self- deprecating lament, “Poor me.Poor me.Poor me. Pour me a drink.” With snatches of wit, and swiftly sketched word pictures of Thomas’s countrymen, Kingdom paints in words and rhyme the world of his bardic countrymen. We are bewitched by the sing song salute to memory and nostalgia, transported by Kingdom’s devotion to Thomas’s lyrical wizardry.


The words wash over me, pictures that leap momentarily into the lives of people, idiosyncratic, real and possessed of humour, pathos and the tapestry of life. I am unfamiliar with much of the work, but listen entranced as Kingdom populates the room with characters born of Thomas’s mastery of words, vivid and alive. Funny, ironic, sardonic, affectionate,cynical, witty and wise, a world of words to express a universe of feelings and dreams. Kingdom pauses momentarily for a sip from the glass and continues with a quip, “Wales is dead from the Eisteddfod up.” before embarking on his account of America and its people during his lecture tour. 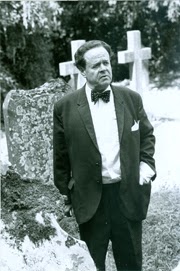 When asked for advice before a performance of his famous radio play, Under Milk Wood, which was not included in Kingdom’s anthology, Thomas replied with three short words., “Love the words”. That love is there in every moment of Dylan Thomas – Return Journey. It is there in the ever familiar “And Death Shall have No Dominion” and “Do not go gently into that good night….Rage, rage against the dying of the light.”


And all too soon, the sea of words that gently laps at our imagination, caressing our ears and painting a portrait of life and landscape in such vivid colours  recedes into the ocean of the soft, seductive sounds of Kingdom’s entrancing Welsh lilt. No poet could wish for more- an actor of Kingdom’s talent to breathe life into the Welsh poet’s words and a director of the calibre and mastery of Sir Anthony Hopkins. Lovers of the works of Dylan Thomas have been offered a rare treat at this year’s Adelaide Festival.


Thank you Bob Kingdom. The time has come to make a return journey to the shapes and sounds of Dylan Thomas’s wonderful way with words.