Out of the Cabinet! by Shortis & Simpson

Out of the Cabinet! by Shortis & Simpson.  John Shortis, composer and keyboard, with singer Moya Simpson; and including lecture by Nicholas Brown.  At the National Archives of Australia, Queen Victoria Terrace, Parkes, Canberra.  March 6 and 7, 2015, 6.30pm and 8.30pm.

I reviewed John Shortis and Moya Simpson, in company with Andrew Bissett, in their first show of political satire in June 1996. (Available at www.frankmckone2.blogspot.com.au )

Called Shortis and Curlies, it was entertaining food for thought at the long departed School of Arts Cafe in Queanbeyan.  Proprietor Bill Stephens (still very active as you’ll see on other posts in this blog) had previously asked them to do a Christmas cabaret show, after Moya had sung there with the likes of Margret Roadknight.

As Peter Webb (Member of the New South Wales Legislative Assembly for Monaro) recorded in Hansard at 4.45 p.m., 24 November 2000: This evening I speak of a sad occasion, the end of the Queanbeyan School of Arts Cafe. The cafe has become a local institution and a role model for cabaret venues. A lot of Australians who perform on the national and international stage got their grounding at that cafe.  He concluded: The cafe has put Queanbeyan on the cultural national map. I offer my congratulations to Bill, Pat and Timothy Stephens on their contribution to the social fabric of Queanbeyan and to the arts in the local region, the State and the nation, and on the assistance they have given to all of the artists. I wish them all the best for this icon's closing festivities over the next few weeks. I sincerely hope that assistance from an individual, the Queanbeyan community or the Queanbeyan City Council will be forthcoming to continue this great icon. My best wishes to the Stephens family.

Unfortunately, no-one put their hand up or a fistful of money to keep the School of Arts Cafe going, though the Queanbeyan City Council now supports the highly successful Queanbeyan Performing Arts Centre (The Q) under the direction of Stephen Pike, also known in those earlier days for his theatre-restaurant productions.

But, fortunately, before they became titled ‘Shortis & Simpson’, their Christmas show had included a song of political satire.  Was it the one about ex-WA Premier  and by then Federal MP Carmen Lawrence’s woes over the Penny Easton Affair?

[In 1996, a Royal Commission into the ‘Penny Easton Affair’ found Lawrence had lied to the Western Australian Parliament. As a result, Lawrence was charged with perjury and resigned as a shadow minister. The resulting court case took two years and, in 1999, she was found not guilty.]
http://www.civicsandcitizenship.edu.au/cce/lawrence_carmen,15274.html and http://www.abc.net.au/7.30/stories/s38678.htm

Politics at Christmas is sure to be a goer in Queanbeyan/Canberra, the Federal Capital, and so was born Shortis and Curlies the following June.  And the point of all this history?  That of all the shows at the Queanbeyan School of Arts, Shortis & Simpson has (or have) endured.  Where the Cafe had been the ‘local institution’, an ‘icon’ on the ‘cultural national map’, John Shortis and Moya Simpson (so tightly bonded that I’m not sure whether to refer to them in the singular or plural) have become one of our crucial cultural repositories.

I used that word advisedly, rather than the word chosen (on another issue) by our budgie smuggling Prime Minister, Tony Abbott – suppository – particularly because S&S (grammatically plural, I guess) have taken the tradition of the School of Arts Cafe right into the heart of Federal Government: the National Archives of Australia.  Each year, when the Cabinet documents of the past are un-embargoed – this year from the Bob Hawke / Paul Keating Government years 1988-89 – John and Moya are paid (at least I hope they are) to satirise our seat of democracy. 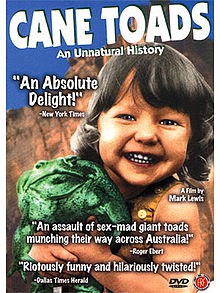 The audience at the 8.30pm session last night was highly sophisticated and obviously included men and women with intimate knowledge of government, past and present.  So what was the film, among all those released in 1988-89, which accrued the greatest approval?  The Cane Toad documentary, of course!  Produced by Film Australia, written and directed by Mark Lewis, its full title was Cane Toads: An Unnatural History (http://en.wikipedia.org/wiki/Cane_Toads:_An_Unnatural_History) and I well remember the long, long shot down a straight country road.  A Kombi campervan takes its time driving towards the camera, every few metres ducking off to the left, or to the right, instead of taking the proper straight line.  Only some minutes in, does the audience (or at least this slow reactor) realise what’s happening.  “Run over the bastards” is the political quote that comes mind.

That’s not from the Hawke-Keating Cabinet papers, but from the time of the early anti-Vietnam War protests in 1966, spoken by the NSW Premier Bob Askin.

(See http://researchonline.nd.edu.au/cgi/viewcontent.cgi?article=1024&context=arts_article for a fictional account by Camilla Nelson of the visit by US President Lyndon Johnson and his wife Lady Bird, called All the Way with LBJ.)

That’s an episode in history that I remember well, too.

The Archives’ description of Out of the Cabinet gives the picture: The musical and comedic stylings of Shortis and Simpson are back by popular demand. 1988 was the year of the Bicentenary, new Parliament House, the Fitzgerald Inquiry, and George Bush senior. In 1989, events in Tiananmen Square unfolded and the Berlin Wall fell. Bob Hawke returned as Prime Minister. Our music charts were jumping with the hits of Crowded House, Madonna, The Bangles and U2.

Join Shortis and Simpson on a humorous musical journey to mark the release of the Cabinet papers of those two eventful years.

An essential part of the show was also the highly energetic lecture by ANU History academic, Nicholas Brown.  You can read the formal research background to his talk at http://www.naa.gov.au/collection/explore/cabinet/by-year/1988-89/index.aspx, but his lively presentation fitted perfectly in style after the main 25 minutes of Shortis & Simpson’s performance.  After hearing songs of the day ranging from comic versions of 500 Miles, through Fast Car, Don’t Worry Be Happy, to the jingoistic Celebration of the Nation, and Eric Bogle’s Poor Wee Billy McMahon who was outshone by Sonia’s split skirt, as well as Paul Kelly’s Bicentennial from the Indigenous people’s viewpoint:

we were introduced to Nicholas Brown via the song Turn Back Time by Cher:

"If I Could Turn Back Time"

I didn't really mean to hurt you I didn't wanna see you go I know I made you cry, but baby

[Chorus:]
If I could turn back time
If I could find a way
I'd take back those words that hurt you
And you'd stay
If I could reach the stars
I'd give them all to you
Then you'd love me, love me
Like you used to do

If I could turn back time

[Chorus #2]
If I could turn back time
If I could find a way
I'd take back those words that hurt you
If I could reach the stars
I'd give them all to you
Then you'd love me, love me
Like you used to do

Nicholas then proceeded to give us a feel for the changes since and, indeed, the political and social beginnings which were in the Cabinet submissions of 1988-89.  Particularly he noted how the  downbeat and often negative language about the economy and how people’s expectations should be contained began to appear in the new phrases used by politicians.  Just one example from today’s Canberra Times [March 8, 2015 p8] (which is of personal interest to me) is how Alan Tudge, the Parliamentary Secretary to Prime Minister Tony Abbott, “said on Saturday that the pension system was likely to become unsustainable”.  This was a word first emphasised in 1988-89, warning us of dire things to come – which turned out to be the recession “we had to have” when Paul Keating ousted Bob Hawke, and still won the 1990 election (since the Liberal Party was going through similar turmoil to today, as Andrew Peacock ousted John Howard), despite raising interest rates to 18% in the vain hopes of stimulating the economy.


It was this sense of history, including questions from those in the know in the audience (for example, about the Notebooks taken by 4 notetakers in Cabinet meetings being embargoed for 50 years!), that dovetailed seamlessly with Shortis & Simpson’s re-creation of the times as we lived them in 1988-89.  Their achievement was grounded firmly in Moya Simpson’s ability to channel the voices of the singers of those days, as well as in John Shortis’ accuracy and originality in his accompaniments.

Nicholas Brown’s presentation was bookended by Peter J Casey’s comic song of the ACT’s Legislative Assembly – The Biggest Town Council – which included four members (from a metre-long ballot paper) voted in at its first self-government election who had stood against self-government !!!  Noting that Inquiries are now a regular feature of our lives, we were reminded that the Fitzgerald Inquiry into police corruption in Queensland took place 1987-89.  “Don’t you worry about that!” said Moya in Joh Bjelke-Petersen’s never to be forgotten voice.

And so we ended on a sober note, singing Crowded House’s You Better be Home, Soon.

Maybe I’ve written more than you might expect for a review of an hour-long show, but to me it’s important to recognise the role Shortis & Simpson still play, and I hope will continue to play, for as many as possible of another 20 years.