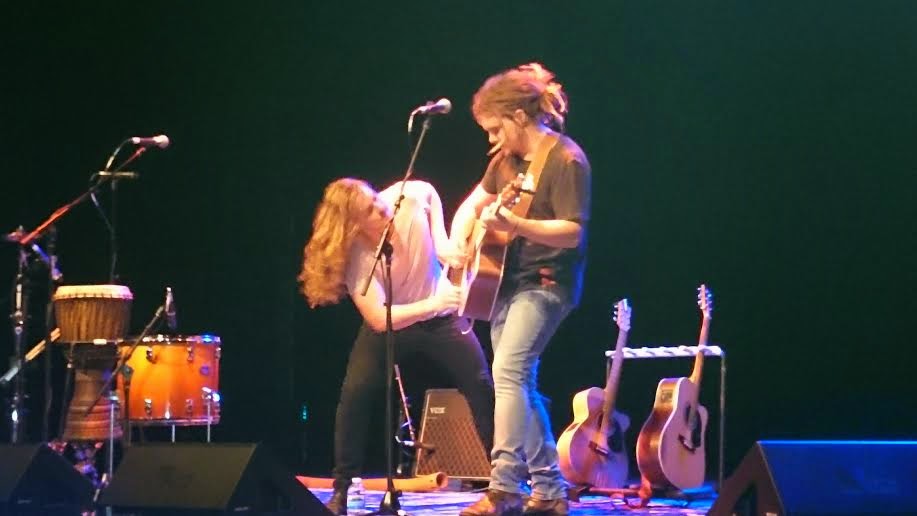 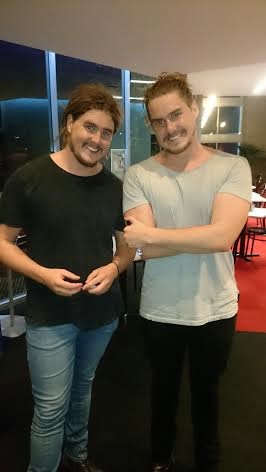 Today, Jack and Pat Pierce, known collectively as Pierce Brothers, announced a record deal with Warner Music. They will belt out a few headline gigs in Australia before they head to Europe to play the PinkPop festival alongside performers including Sam Smith and George Ezra.

Last night however, Pierce Brothers opened for Dan Sultan at The Street, in his “Dirty Ground” tour.

The boys’ infectious blend of folk-pop music was delivered in a “more-than-slightly-hectic” performance.

During the set, Jack played everything from the drums, guitar and tambourine to The Street Theatre railing. Then he pulled out his didgeridoo, delighting the audience as he played it, whilst simultaneously holding the mouth organ for his guitar-strumming brother to play.

Their more mellow songs including “Empty Canvas” were reminiscent of Joshua Radin’s sound and included well balanced, sweet harmonies. Other songs brought to mind Simon and Garfunkel’s “Cecelia” whilst overall there is an undeniable Mumford and Sons vibe to Pierce Brothers.

Despite the pronouncement before a couple of songs that “This one is REALLY miserable”, the long-haired lads invariably worked back up to a toe-tapping, hand-clapping hoe-down.

“Tallest Teepee in Town”, “Golden Times” and “It’s My Fault” were perfect examples of why these guys need to be experienced in a tent – so you can dance around in the dust wearing your finest folk hat.

The set was rounded out with the beautiful song “Flying Home” and “Genevieve”, written for their sister.

Some of the lyrics were difficult to pick up, unfortunately, but Pierce Brothers is an impressive duo. It won’t be the vocals alone that stay with you, but the “Woo!”- ing, the hair flicking and the undeniably fun and contagious rhythms.

DAN SULTAN cut an imposing figure as he walked onto the dark stage.

The solo performance of his “Dirty Ground” EP meant songs were delivered raw, sparsely and intimately, just Dan and his electric guitar and keyboard.

Dan has a strong and beautiful voice and he connected with his audience in this setting. “Musicians have the only profession where having “WOO!!!” yelled at you when you ask “How are you?” is acceptable”, he notes.

Dan’s quirky stories kept the audience chuckling. And while there remained a sense of a slightly shy, awkward, young man, Dan was not afraid to let us in on the darker periods in his life, during which time he wrote “Man on TV”, about seeing his younger self on TV one night. “The good passes, the bad passes, you just have to see it out”, he said, before singing it.

Dan collaborated with Paul Kelly to write “On the Leffy” (as it’s written, although inspired by Dublin’s Liffey River) about missing home and family. And with another Paul, of the Dempsey variety, to write “Mountaintop”.

With a funny little story about a grumpy man in some terry-toweling pants, Dan immediately launches into “Nyul Nyul Girl”, a beautiful lullaby from the “Bran Nue Day” Soundtrack, about a father’s love for his daughter. It’s moments like this you realise Dan can take you from laughter to goosebumps in about 4.5 seconds. His dreamy vocals soared over the pretty melody, played on keyboard, in the melancholic “Gullible Few”.

Be it a gentle love song, such as the simple, beautiful “Nobody Knows” from his Blackbird LP or the tough “Crazy” about domestic violence, from songs about growing up in Fitzroy to “Kimberley Calling”, Dan entertains and impresses with a warm modesty, a husky growl or an up-tempo rock-out.

Letting loose with “Rattlesnake” and “Same Man”, on guitar, Dan rocked out his finale, informing us that he’d somehow managed to do an extra-long set tonight. And we were thankful for it.


Posted by Canberra Critics Circle at 1:05 AM