BOYS IN THE BAND

The lovechild of “Human Nature” and “Jersey Boys” proved an apt description of “The Boys in the Band”, a slickly produced entertainment which played  just one concert in the Canberra Theatre Playhouse following its performance the previous night in Taronga Park Zoo as part of the zoo’s Twilight series. 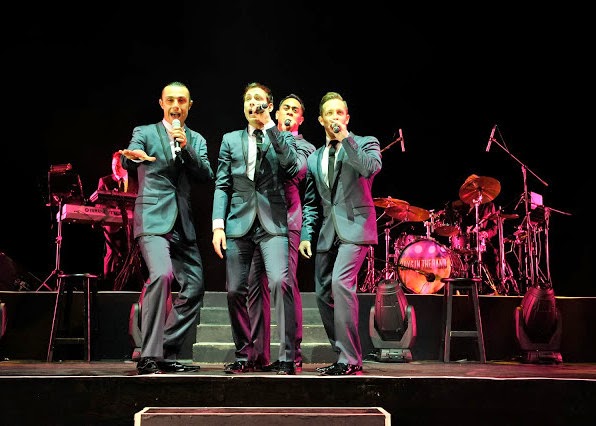 Featuring a cast of four handsome and talented young men, Hugh Barrington, Tom Sharrah, Leigh Sleightholme and Tom Struik, who, between them, have already notched up some impressive theatre and television credits, the show turned out to be fast-moving,  high energy concert of hit songs associated with some of the most successful boy bands of the last fifty years. Included among them are Frankie Valley and the Four Seasons, The Beatles, The Jackson Five, The Beach Boys, The Righteous Brothers, The Backstreet Boys, The Bee Gees  and even, surprisingly, Simon and Garfunkel.

Dressed in neat suits and ties, the talented quartet, backed by an excellent four-piece ensemble, The Players, presented a potted history of boy bands. They worked their way through well-chosen medleys of the hit songs associated with each of the various groups commencing with Oh What a Night and Sherry Baby in the style of Frankie Valley and the Four Seasons, through Smoke Gets in Your Eyes and The Great Pretender a la The Platters, through The Beach Boys Good Vibrations, a stylish version of the Bee Gees You should be Dancin and dozens more.

Most of the selections were presented with tightly choreographed movement reminiscent of the various groups, often cheesy but with the look of authenticity, and performed with energy, panache and precision by the singers. The harmonies were spot on, with the energy level maintained throughout.  Connecting narration was shared among the singers, with each singer having the opportunity to shine in solos and duets.

The possessor of a lustrous soaring falsetto, Hugh Barrington charmed the audience early on with a superb performance of “Unchained Melody”. Tom Sharrah got his opportunity in a lovely arrangement of Simon and Garfunkel’s “Bridge Over Troubled Waters” and again in duet with Hugh Barrington, “Scarborough Fair”. Tom Struik provided another highlight with an excellent version of Michael Jackson’s “Ben”.

The only blights on the performance were the segment involving an unfortunate audience member being hauled up on to the stage for some embarrassing participation, and the constant “Are ya havin’ a good time?”.  This show is too polished and professional to include these corny time-wasting ploys. When you have four excellent singers available, surely another showcase solo would be a better use of their talent.

That said, Boys in the Band provides an excellently produced, superbly sung, performed and  constantly entertaining dash through the colourful history of boy bands. Watch out for them when they come your way.