Everybody Loves Lucy by Elise McCann and Richard Carroll 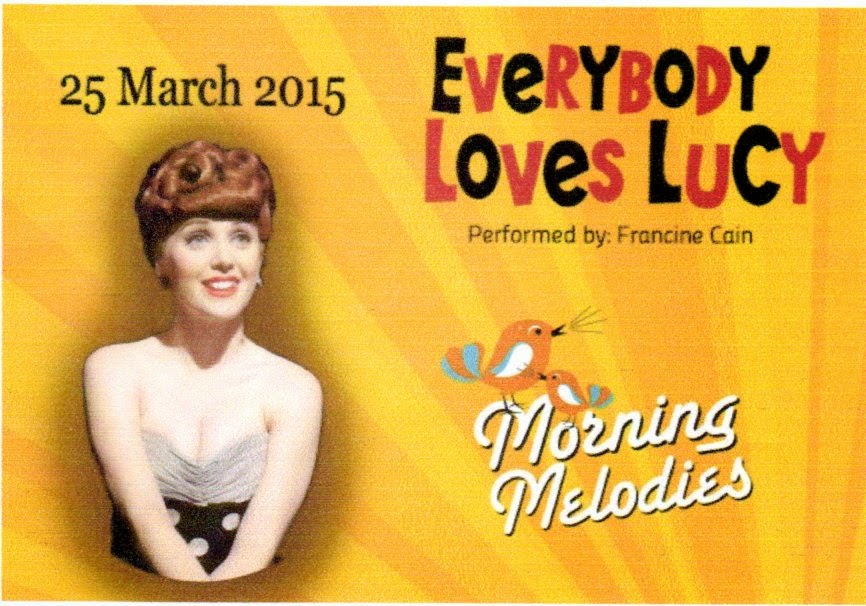 Actor Francine Cain performs as Lucille Ball in Everybody Loves Lucy in the role originally played by Elise McCann.

Looking remarkably like Lucille Ball (and Elise McCann) on stage, Francine Cain is a Helpmann Award-nominated musical theatre star, who has just concluded an 18-month national tour as Frenchy in the musical Grease. She was the winner of the 2010 Rob Guest Endowment Scholarship, and her credits include Regina in Rock of Ages (Helpmann and Green Room Award nominations), and understudying Truly Scrumptious in the Australian tour of Chitty Chitty Bang Bang.

This recognition is not surprising, as you hear Francine reproduce the voices of Lucille Ball – from the piercingly high-pitched American television comedy voice to the mature voice of her final interview following her divorce from Desi Arnaz and the end of the original series of I Love Lucy.  Perhaps even more engaging is her movement, from the Ball skit on her childhood ballet class and the many and varied little dance illustrations of the Lucy character through to expressive facial and bodily contortions that indicate excellent mime training.

Though Lucille (and an anonymous supposedly representative American housewife who watches and empathises with her as she appears on television) is the star of this production, Anthony Harkin’s Desi Arnaz is very well acted (in addition to his terrific piano-playing).  In fact it is his Desi that brings out the theme of the show.  Was he, in real life, playing a role which did or did not justify Lucille’s characterisation of him as a ‘loser’ who needed to destroy his own achievements; who needed to see himself as a failure?  The script, deliberately, makes it difficult to be sure when Desi is acting or not acting – meaning that Anthony’s acting was well done.

Because, by the end of this short hour-long overview of her life, we only get to know Lucille’s viewpoint, we are left wondering.  Everybody Loves Lucy is not of the dramatic quality of, say, Robyn Archer’s A Star is Torn (1979) – it’s light entertainment rather than excoriating life experience – but perhaps that’s because, as Ron Cerabona records (in the Canberra Times) Although both Ball and Arnaz were behind the success of the show and of [their company] Desilu, Ball tended to get most of the credit and Cain says Arnaz was "torn".

But a theme of social responsibility, something about Jerome Kern’s Smoke Gets in Your Eyes you might say (just to keep to the musical ambience), makes a clever point.  The show begins with Lucille’s (or Lucy’s)  and Desi’s (or Ricky’s) advertisement for cigarettes which, if the woman buys them for her man to show she loves him, then he will love her, too.  The same song is reprised, and sung in a quite different mood, towards the end of their marriage – and the two points are made in one, since on our stage in modern non-smoking times, the cigarettes are not lit, as, one might say, the fire of their relationship had gone out.

So the entertainment was not perhaps as ‘light’ as it seemed.  It was certainly very funny and enjoyable, and very appropriate for The Q’s Morning Melodies program.

[If for some unknown reason you want to follow up Smoke Gets in Your Eyes (lyrics by Otto Harbach), have an interesting read at http://www.steynonline.com/1663/smoke-gets-in-your-eyes ]