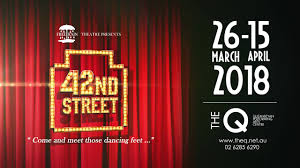 
From the moment the curtain raises on dozens of tapping feet the audience is transported into the razzle dazzle world of show-biz as the cast of the Broadway musical “Pretty Lady” busily rehearse for their big opening night. Young dancer, Peggy Sawyer (Sophie Highmore) arrives late, but manages to catch the eye of leading man, Billy Lawlor, (Sam Ward), incur the wrath of leading lady, Dorothy Brock (Louiza Blomfield) and the curiosity of big time producer, Julian Marsh (Jarrad West). And as this is a musical, no prizes for guessing who gets to go on and save the show when Dorothy Brock breaks her ankle just before opening night.


The quintessential Broadway musical, “42nd Street” is packed with recognisable songs, big dance numbers, and a captivatingly corny storyline.  Free Rain Theatre does it proud with a lavish production, under the experienced direction of Chris Baldock, which manages to capture a great deal of the spectacle and excitement expected of a Broadway show.


To the exciting sounds of a classy, appropriately brassy, band, conducted, with his signature attention to detail, by Ian McLean, the large, talented cast sing and dance their hearts out in a breathtaking succession of  tightly drilled, spectacularly costumed dance routines devised by Canberra’s queen of tap, Michelle Heine.  Scenery changes featuring dazzling LED images provide the production with a professional gloss.

﻿﻿In her first leading role, Sophie Highmore impresses as the young ingénue, Peggy Sawyer. She dances brilliantly, sings with charm and confidence, and has no trouble convincing that she could lead a Broadway show. Louiza Blomfield chews up the scenery in a very funny performance as the fading star, Dorothy Brock, while Jarrad West scores with his likeable portrayal of the Broadway producer, Julian Marsh.


With this production of   “42nd Street” , Free Rain Theatre have not only succeeded in achieving an excellent realisation of an iconic Broadway musical that captures and celebrates the very essence of Broadway, but which also delivers scintillating musical theatre which should not be missed by anyone seeking an evening of delightful theatrical  escapism.

This review first published in the digital edition of CITY NEWS on 29th March 2018.
Posted by Canberra Critics Circle at 8:44 PM