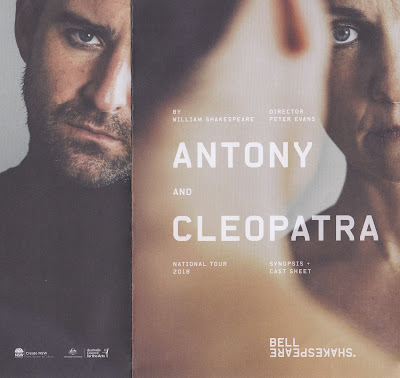 
All of Shakespeare’s plays, even the comedies, question the nature of absolute rule.  Unsurprisingly, considering the likelihood of execution in the reigns of autocrats Queen Elizabeth I and James I, he set his plays in the past and in other places.  Even his history plays were in the past “which is another country”.  So Shakespeare made his plays metaphors or allegories: an astute move as writer and (I guess) director of theatre which upper and lower classes felt to be relevant to their times – and from which he did well financially and in social status, as a tour of Stratford upon Avon reveals.

As Bell Shakespeare hangs upon the great man’s coat-tails, and has become, like Shakespeare in London – the capital city of his day – an accepted central element of our culture (we can count Sydney and Canberra as our combined capital, I think), how does this production of Antony and Cleopatra stack up?

I’ll start with costumes.  Read the Globe Theatre Costumes site http://www.bardstage.org/globe-theatre-costumes.htm and you will notice two points: Shakespeare’s actors were probably not dressed in ancient Roman or Egyptian clothes, but were certainly dressed in materials and colours which immediately told the audience the social status of each character.  Queen Elizabeth made this clear in her Sumptuary Law of 1574 ( The Statutes of Apparel ) [which] contained the following clause:

" Note also that the meaning of this order is not to prohibit a servant from wearing any cognizance of his master, or henchmen, heralds, pursuivants at arms; runners at jousts, tourneys, or such martial feats, and such as wear apparel given them by the Queen, and such as shall have license from the Queen for the same."

Shakespeare’s theatre companies were given that licence from the Queen so the actors could wear clothes on stage of a class different from those they had to wear in the street.

So should Anna Cordingley have dressed her actors in her idea of Roman and Egyptian clothes, to make it clear the play is set in that place in the past?  Or should she have gone for what Shakespeare’s actors would have worn – but without an audience today understanding the meanings of Queen Elizabeth’s laws of apparel?  Was it enough, then, to dress the characters in some kind of recognisably millenium-babies’ style for modern 18-year-olds to get the metaphorical meaning of the play?

As a pre-baby-boomer, from a time when couture could more easily define social status, I found oligarchs and soldiers in narrow-leg suits a bit hard to swallow (and their identities hard to follow); while a dressed-down with messy hair Cleopatra and Charmian as some kind of Spiegeltent performer (they’ll be here on April 26 in Civic Square) didn’t seem to me to support what Peter Evans wrote (in the Conversation published in the program):

Of Antony and Cleopatra’s relationship: “They use the biggest images and are often entertaining each other and themselves with these poetic gestures.  It’s what makes this play and their love very adult.”

And having actors draped in various unlikely forms over modern lounge room furniture, in costume but not apparently in character, in scenes their characters were not part of, didn’t seem to match the director’s other words:

“Shakespeare’s historically based plays are about powerful people in back rooms, making decisions that will affect the world....where the stage could be an oval office or a hotel that gets taken over for a political campaign – they’re waiting spaces, they’re meeting spaces...[the actors] won’t always be their characters, but they’ll be witnesses....”

It was the style of movement and the poses, in a setting that never had the sense of an oval office or grandiose hotel, that seemed out of place to me.  The penultimate scene, where the whole cast pop-danced to a pop-song before the too-long ending (which I think was Shakespeare’s fault), was so out of place that there was a general feeling of “What is this?”  The couple behind me, throughout the genuinely sad scene of Enobarbus dying in a ditch rather than follow either side in a crazy war, and even through the final defeat and brave suicides of Cleopatra and her maids, continually crackled their Malteser packets.

Well, Peter Evans did say “When the audience watches this production, I’m hoping there’s a sense of delight in how outrageous these people are.  The audacity, the charisma, and the language of the play is big and exciting.”  Like the crackles of the lolly packets.

Seriously though, I think this production has sincerely tried to deal with this difficult play but has not been able to integrate the elements which Shakespeare set up as a real challenge: Can we accept that power brokers seeking autocratic power can genuinely fall in love with each other?  Can we have empathy for such people when they lose in that competition because of that love?

For today, for example, should we feel sorry for US President Donald Trump having to fend off criticism of his apparent friendship with Russian President Vladimir Putin, because of his marriage to Melania who was born in Slovenia (then part of communist Yugoslavia).  Did Putin use this situation to hack Hillary Clinton’s emails and so support Trump’s election?  Is Putin now engineering a war over Syria to put Trump down?

Just remember, one of the countries in the contest between the children of Julius Caesar (Octavius and Octavia Caesar) and Pompey the Great (Pompey the Younger, played here as Pompey’s Daughter) – a conflict which dragged in the older generation’s Mark Antony and Cleopatra – was Syria!

Pompey the Younger was murdered in Egypt in 45 BCE.  Mark Antony married Octavius’ sister Octavia in 40 BCE  (don’t forget the dates go backwards).  Mark Antony and Cleopatra committed suicide in 31 BCE.  Should we feel sorry for them?

I’m inclined to think that Shakespeare wasn’t sure what he thought about this.  The play may have been written about the same time or a year or two either side of King Lear (1605).  I’m sure Shakespeare felt empathetic towards Lear when he (Lear) realised how his demand for power had undermined his love for his youngest daughter, Cordelia.  Antony and Cleopatra’s love reversed the situation – their demand for love undermined their power.

Though Peter Evans and Anna Cordingley tried to bring out the power side of the story, by projecting the dates of the wars on the scrim between scenes, these made no real impact on us in relation to the love story.  I feel that I would, for a modern audience, trim Shakespeare’s script down to focus better on the main elements of the story, with less of the “big and exciting” language (which worked in Shakespeare’s day), to simplify the issue of power and love – even make it more domestic than political on the huge scale of Shakespeare’s original.  Just as Shakespeare himself did in King Lear.