THE WIZARD OF OZ

The Wizard of Oz  by L. Frank Baum.

It is said that somewhere at the end of the rainbow there lies a pot of gold and I found it at last night at the opening of John Frost and Suzanne Jones’ glittering and spectacular production of The Wizard of Oz. Everything about this brilliant revival of L Frank Baum’s classic tale of a young girl’s tornado whisked-away adventures in the Land of Oz is pure gold.

As a child I watched the journey of Dorothy and her dog Toto with childhood fascination, enraptured by the antics of the Scarecrow, Tin man and Lion, terrified by the evil actions of the Wicked Witch of the West and entranced by the beauty and goodness of Glinda, the Good Witch. I understood the eternal battle between good and bad and I dreamed that someday I would find what lay beyond the rainbow in my magical Land of Oz.

But last night at the Adelaide premiere of a revival that hurled us with captivating and thrilling force into the twenty-first century of technological wizardry, astounding set designs and spell-binding amplification, I watched this magnificent children’s classic with the eyes and ears of an adult who still remembers with astonishment the moment that Dorothy’s black and white world of Kansas turned to colour in the merry old land of Oz and I went with her and Toto, Scarecrow, Tin Man and Lion down the yellow brick road. It was magical and mind blowing in its time and I dreamed that I too would overcome every peril to find my brain, my heart and my nerve and return to the safety and  love of my own sweet home . 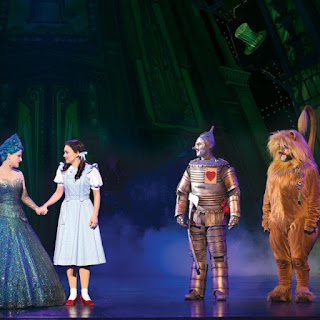 Last night I watched again with all the wonder of the child at the phenomenal stage effects, the exciting performances of a wonderful cast and a story that transcends Time to carry us through all Time. However, in the time of Trump, the production peeled away the innocent gaze of the wonder-filled child to reveal a more cynical view of the American way.  Is L Frank Baum’s classic tale a prophetic message for our time?  Is it a xenophobic salute to jingoistic isolation? Is there no place like home and Dorothy must be content to stay at home with Aunt Em (Sophie Weiss) and Uncle Henry (Paul Hanlon).  Is the Wicked Witch of the West (Jemma Rix) with her Cossack cohorts and alien gargoyle servants the threat of Reds under the bed or intruders from other lands? Or is this production still a wise morality tale, that like all good art, invites us to question why “if happy little bluebirds fly beyond the rainbow why oh why can’t I”?

Perhaps both Baum and the cast and creatives of this magnificent retelling of The Wizard of Oz have hedged their bets to tell us through their art that there is no place like a loving home but beyond the rainbow is where we must go to discover the secrets to our dreams. In any event, this production will transport you to a world of wonder and excitement.

Devotees of the 1939 Oscar winning movie will be thrilled by the ultimate pleasure of seeing their favourite characters transferred to the live stage. It is as though the principals of this London Palladium production have channelled the stars of yesteryear’s triumph. Though somewhat older than Judy Garland, Samantha Dodemaide’s Dorothy captures the spirit and girlish innocence of the girl from the farmland of Kansas. Jemma Rix is Margaret Hamilton incarnate as the irascible Miss Gulch and the tyrannous Wicked Witch of the West, yet with her own brand of riveting wickedness. Lucy Durack gives a refreshingly different spin to Gilda, the good witch, with a performance that is feisty and fearlessly down to earth, avoiding the somewhat saccharine sweetness of goodness and displaying the might of the modern woman. The ghosts of Ray Bolger, Jack Haley and Bert Lahr inhabit Eli Cooper’s agile and rubbery-limbed Scarecrow, Alex Rathgeber’s metallic Tin man and John Xintavelonis’s cowardly Lion. Each actor brings their distinctive style to the role, while remaining true to the original film interpretations. It is this allegiance to every child’s vision of the characters in The Wizard of Oz that lends the production authenticity, wonder and charm. 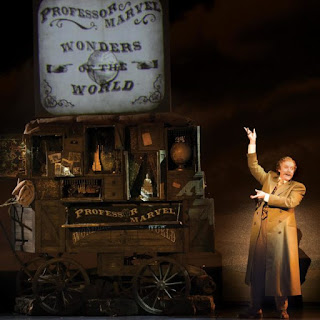 There is marvelous stage presence in Anthony Warlow’s Professor Marvel and the benignly fraudulent Wizard of Oz, and with a voice to match, Warlow commands the stage in his eponymous role. A lively Ensemble revel in the opportunity to fill the stage with Munchkin quirkiness, military precision and emerald posturing of the highfaluting citizens of the Emerald City.

W.C. Fields once warned, “Never act with children and animals.” In the case of Dorothy’s terrier Toto, he would have claimed his case. The young woman next to me capitulated utterly with adoring sighs at the sight and actions of Dorothy’s adorable canine companion. Toto (Trouble or Flick)) under trainer, Luke Hura, turned in an Oscar winning performance.

Harold Arlen’s music and E.Y. Harburg’s lyrics have stood the test of Time. The old favourites still work their magic in David Cullen’s orchestration and the exuberant playing from the pit. I am less enamoured of Lloyd Webber and Tim Rice’s additional music and lyrics, and as much as I appreciate the reunion of these two Wunderkids of Jesu Christ Superstar and Evita, apart from giving songs to characters who may have missed out originally, they add little to the adventure or the characters. Still it is rewarding to once again be amused by Rice’s gift for lyrics – “She’s clueless and I want her shoeless.”

Andrew Lloyd Webber’s inspired imagining of a timeless classic that touches every heart will delight and enthrall. With Jon Driscoll and Daniel Brodie’s exciting video footage of storms and demons, Robert Jones’s vibrantly colourful scenic and costume design and Hugh Vanstone’s magical lighting, the Festival Theatre explodes with colour and action. Cast and creatives under Jeremy Sam’s tight and energetic direction bring dreams to life on a journey of laughter, tears and thrilling excitement. In this not to be missed spectacle, young and old alike will be whisked away on a magical ride that they will never forget.