BLACK IS THE NEW WHITE 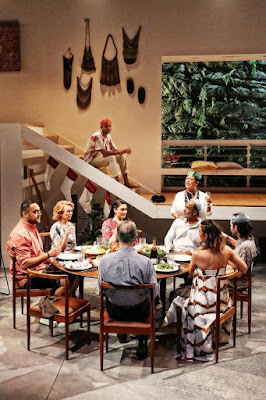 
What a delightful breath of fresh air is playwright, Nakkiah Lui. Her writing is witty, perceptive, informative and deliciously entertaining; her characters, believable, charming and very funny.


In “Black is the New White” she addresses complex issues of race, class and identity by focussing on two middle-class Australian families, one of which, the Gibsons, is aboriginal.


Charlotte Gibson (Shari Sebbens) is an aboriginal lawyer. Her father, Ray, (Tony Briggs) was a prominent politician, who has now retired, together with his wife Joan (Melodie Reynolds-Diarra) to a comfortably upper-middle-class life. Their other daughter, Rose(Nakkiah Lui), is a successful fashion designer with her own brand, and is married to  former footballer, now banker, Sonny Jones (Anthony Taufa).


Francis Smith (Tom Stokes) is Charlotte Gibson’s fiancé and is an experimental classical composer. His father Dennison (Geoff Morrell) was a prominent conservative politician, now retired, together with his wife, Marie (Vanessa Downing), to a comfortably upper-middle-class life.


When Charlotte Gibson invites the Smiths to spend Christmas with her family at their holiday home as an opportunity to announce her engagement to Francis, the scene is set for a succession of explosive situations.


Paige Rattray’s direction is deft and insightful and her casting is spot-on.  She takes full advantage of Renee Mulder’s opulent setting to keep the tightly focussed action moving at a cracking pace, whether highlighting quiet moments of intimacy, or in the glorious slapstick nude scene, when Francis grabs a family photo off the wall to hide his embarrassment, or the uproarious food fight which involves the full cast.


Canberra audiences where fortunate to see the original cast in this touring revival, excepting for the role of the younger sister, Rose Gibson, now performed by the author herself, Nakkiah Lui, who was quite delightful as the young wife who took rather a long time to work out that her ex-footballer husband (charmingly portrayed by Anthony Taufa) was actually Tongan.  Shari Sebbens and Tom Ford bought warmth, hilarity and conviction to their roles as Charlotte and her intended fiancé, Francis, the young couple whose impending engagement is the catalyst for much discussion.


Equally pitch-perfect are Tony Briggs and Melodie Reynolds-Diarra, as the Gibsons, and Vanessa Downing and Geoff Morrell, as the Smiths, while Luke Carroll almost steals the show bringing easy-going panache to his role as the charming, ever-present narrator who links the dots by providing explanations and excuses throughout the play.


Undeniably enjoyable and diverting, the play felt a little too long, and while the issues it raises are pertinent, there are perhaps too many of them to comfortably digest in one sitting. Nevertheless, “Black is the New White” is an impressive and important new play from a talented new emerging playwright with some interesting things to say. It has certainly whetted the appetite for seeing more of her work in the not too distant future.
This review also appear in Australian Arts Review. www.artreview.com.au