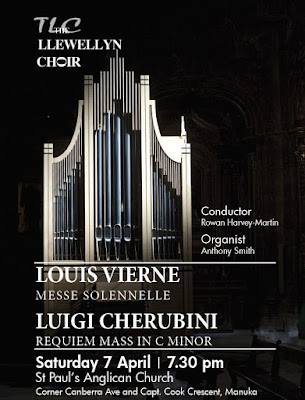 Just prior to flying off to Spain, the Llewellyn Choir presented a concert with the works they will be performing in Madrid, Salamanca, Cordoba and Barcelona.

Judging by their performance of Luigi Cherubini's Requiem Mass in C minor and Louis Vierne's Messe Solonelle they should make quite an impression with audiences in Spain.  They certainly impressed the audience at their Manuka concert.

Cherubini’s Requiem Mass, the most frequently heard of his works, was written in 1816 to honour the anniversary of the death of King Louis XVII and Marie Antoinette in 1793.  It is sung only by chorus – there are no soloists.

The choir gave a stirring performance of this dramatic work.  Their fine singing of the Introduction and Kyrie set the atmosphere for the rest of the work.  In the lengthy Dies Irae the music ranges from quiet reflection to high drama and the choir sang it very well.  They were particularly impressive in the quiet passages, maintaining tight control at all times.  The sombre ending of the work was especially well sung.

Louis Vierne’s Messe Solonelle premiered in Paris in 1901.  Set for chorus and organ, it’s a fascinating work with moments of high drama contrasting with ethereal, introspective sections.  It was a good showcase for the choir’s abilities.  From the exciting Kyrie at the start of the work, the choir showed a confidence that was maintained through the rest of the contrasting sections of the work.  There was a great sense of joy in their singing of the Gloria and their heartfelt Agnus Dei with its final message of peace was especially moving.

Conductor, Rowan Harvey-Martin has done excellent work with the choir with both works, not only technically but with the emotional depth that the choir achieved.  Organist, Anthony Smith, did a fine job accompanying the choir in both works.

This review was first published in the Canberra City News digital edition of 8 April.

Len Power’s reviews are also broadcast on Artsound FM 92.7’s ‘On Stage’ program on Mondays from 3.30pm.
Posted by Canberra Critics Circle at 10:06 AM