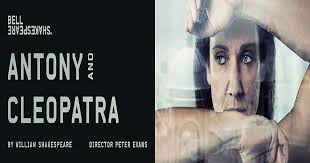 
If you’re not familiar with Shakespeare’s rarely performed “Antony and Cleopatra”, but are keen to take this opportunity to experience it, then you’d be well-advised to brush up on the text before you see it, because this production offers little help in deciphering what is going on in the complex plot.


In Bell Shakespeare’s current production the play  is performed in modern dress, in a single setting which suggests a modern fashion salon or hotel foyer, with the actors dressed in elegant cocktail wear with no clues as to rank or ethnicity. Subtle variations in the lighting and sound, or dates projected on to the drapery, are the only indication of changes in time-frame or locale. Adding to the challenge, some actors change character, but not costume, and remain onstage artfully posed in tableaus, when not required for the scene being enacted.


Focussed towards scholars, rather than theatre-goers wanting to brush up their Shakespeare, this production demands careful attention to the text, which for the most part is delivered in impeccably phrased speeches, rather like a series of audition pieces, with only occasional opportunities to engage with the characters or story.


However, don’t be put off if watching actors in chic modern dress expounding Shakespearean dialogue is not necessarily your idea of Shakespeare, or if you’re not in the mood to have your brow furrowed trying to work out the complexities of the plot, because there is still much to savour in this production.


Peter Evans inventive direction which has the actors falling into slow-motion group movement, hauntingly movingly through gauze corridors, or freezing into those previously-mentioned artful tableaus, keeps the eyes engaged, and the mind wondering. He also manages to locate quite a few genuine laughs in the text.


Catherine McClements rightfully dominates the stage with her idiosyncratic portrayal of Cleopatra as a passionate and wilful woman. Her reaction to the news that Mark Antony has married Octavia is one of many fine moments to be relished  in her interpretation. McClements receives excellent support from Zindzi Okenya and Janine Watson as her handmaidens Charmian and Alexas.


Despite an interesting interpretation, Johnny Carr was not able to match McClement’s presence. His Mark Anthony came across as immature and self-indulgent, rather than the hero Cleopatra perceives him to be.

Among the fine ensemble cast, Lucy Goleby stood out for her assertive performance as Pompey, Ray Chong Nee offered a bold Enobarbus, and Gareth Reeves intrigued with his laid back interpretation of Octavius.


So, even if this is not the “Antony and Cleopatra” you were expecting, take the plunge, you might discover that this is an even more memorable production than you dared to expect.