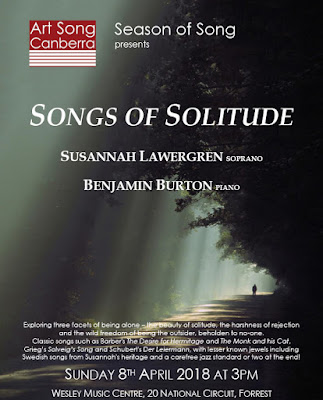 
The works chosen by soprano, Susannah Lawergren, for her Art Song Canberra concert, ‘Songs of Solitude’, covered a wide range of composers from Schubert to Sibelius, Rachmaninoff, Grieg and even Rogers and Hart.

Divided into two halves, she commenced with ‘Winter Journey’ songs.  Opening with, appropriately, four of Schubert’s ‘Winterreisse’ songs, Lawergren’s fine soprano gave these songs a nicely introspective quality. ‘Will-o’-the-Wisp’ was the highlight of this set.

‘Was It A Dream?’ by Sibelius was beautifully sung and Benjamin Burton’s piano accompaniment for this piece was masterful.  Lawergren advised us that the song, ‘The Forest Sleeps’ by Swedish composer Hugo Alfvén had been sung at her wedding.  It was clear from the heart-felt performance she gave of this song that it meant a great deal to her.

Also in the first half of the program, Benjamin Burton gave a hauntingly beautiful performance of the piano solo, ‘Clair de Lune’, by Debussy. 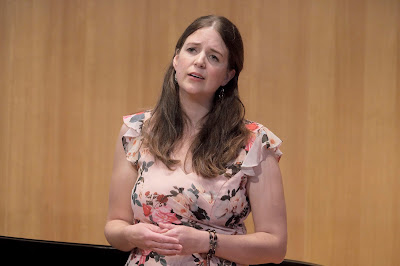 The second half of the program looked at ‘Solitary Characters’.  Lawergren displayed the purity and clarity of her voice with ‘The Listening Mary’, singing unaccompanied and out of sight off-stage.  She followed this with a pleasingly atmospheric ‘Solveig’s Song’ by Grieg.  ‘The Desire For Hermitage’ by Samuel Barber was also very well sung.

Also notable in the second half was her fine performance of ‘The Organ-Grinder’ by Schubert with a notably well-played accompaniment by Burton.  Two contemporary works by Ricky Ian Gordon were for me the highlight of the concert.  Lawergren sang the contrasting songs with a nicely-judged depth of character and great feeling.  Burton’s accompaniment was especially fine with the tricky rhythms of ‘I Am Cherry Alive’. 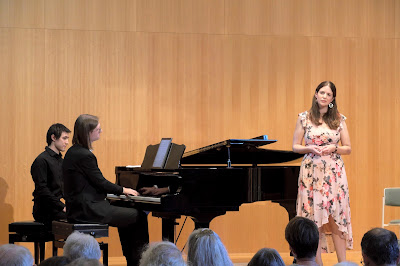 The program finished with two amusing Broadway songs that were fun but not as successful as the rest of this fine program.  Her encore of Grieg’s ‘The Time Of Roses’ was an excellent choice to finish an afternoon of memorable music and fine singing.

This review was first published in the Canberra City News digital edition of 9 April.

Len Power’s reviews are also broadcast on Artsound FM 92.7’s ‘On Stage’ program on Mondays from 3.30pm.
Posted by Canberra Critics Circle at 9:25 AM