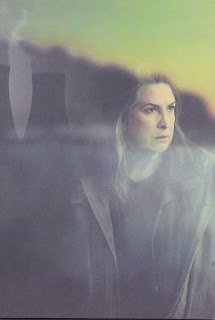 
Though the performances, set, sound, and lighting designs were all up to the expected standard for these major theatre companies, I found the playwriting left me unsatisfied.

Despite STC’s artistic director Kip Williams writing “...Lucy talks about her struggle to find an emotionally resonant way to write about climate change.  She clearly found it”, I think she has tried to put too much into this two-hour long (without interval) three-hander.

The first issue is that the meltdown of the nuclear power plant – because these retired nuclear engineers when they were in their 20s did not plan for a tsunami on the east coast of Britain to flood the reactor’s pumping system – could not have been caused by climate change.

Nor was the real case in Japan on which this story is obviously based.  The ring of fire that Japan sits on is caused by geological plate movements quite independent of our last 200 years’ increase in global warming.  In her play, Kirkwood has a local earthquake which shakes Robin and Hazel’s house near the reactor and which then causes a tsunami which floods the house and the reactor.  In the geology of Japan this scenario is possible as happened at Fukushima, but not in Britain.  See https://www.geolsoc.org.uk/Plate-Tectonics/Chap4-Plate-Tectonics-of-the-UK.

Even if it had been possible, it would have had nothing to do with climate change.  No wonder Lucy was struggling.

However, accepting the scenario as a fiction for the sake of writing about how even middle-class scientists have personal sexual relationships which mess up their lives when placed under ethical tension in their later years, the play still doesn’t ring true.  The dilemma, which is hardly a matter of much fun, takes up the idea that they should be cleaning up the nuclear reactor rather than younger people, because the radiation will inevitably cause cancer and early death.

Rose has organised a team of other old workers and needs the expertise of Hazel and Robin, arguing that young people should not be employed because they have their whole adult life ahead of them, while she, Robin and Hazel have their relationships and children behind them, with only their unnecessary old age to go.  If their lives are shortened by radiation, that is better than sacrificing the young – especially considering that the three of them helped cause the problem in the first place.

It’s a clinical proposition which I suppose Lucy Kirkwood imagines a scientist might make.  But the more than 30-year-long story of Rose’s previous relationship with Robin, his marriage to Hazel instead, engineered by Hazel to thwart Rose (she claims), and the children Robin has with Hazel while Rose has none because she only ever wanted children with Robin, becomes the main focus of our attention for two hours.

The only relevance to the issue of climate change is that Rose has kept on smoking, while Hazel insists on ‘doing the right thing’ – like picking up other people’s rubbish as well as their own when she and Robin go camping.  Otherwise the real story is about Rose’s obsession with Robin, to which he apparently may have responded at times during his married life; and Rose’s self-imposed single state, now at the age of 65.

The end is a cop-out.  In my view, Kirkwood could see after two hours that there is no end to the situation.  So after a point about halfway through – a kind of interval, perhaps – when the three of them break out into dancing together as they did 40 years previously, at the end Hazel gets out her yoga mat and starts the salute to the sun, and Rose (the smoker) joins in.  Robin seems to accept that things have settled, despite his agreement to leave with Rose for the power plant, without Hazel’s decision clear – and this is to force independence on their 38 year old daughter, Lauren, who is constantly on the phone never having properly grown up.  I’m sorry, but I seemed to have lost the plot – was it about the children, or the grown-ups, or the dangers of nuclear power?  And what ever happened to climate change?

Kip Williams writes “People have said this is Lucy Kirkwood’s best play yet, and some have gone further to say that this might be the play of decade.”  I don’t think so.  I reviewed Kip Williams’ production of Kirkwood’s Chimerica (March 11, 2017) and thoroughly agree that is a major work.  I think the change to a concentrated domestic setting has not worked for Kirkwood as well as her handling of the extensive political setting ranging from Beijing to New York in Chimerica.

And, as a contrast, I would be inclined to say that the other recent domestic writing with broader implications produced by Sydney Theatre Company – Black is the New White – suggests that Nakkiah Lui is the playwright with “the play of the decade”.