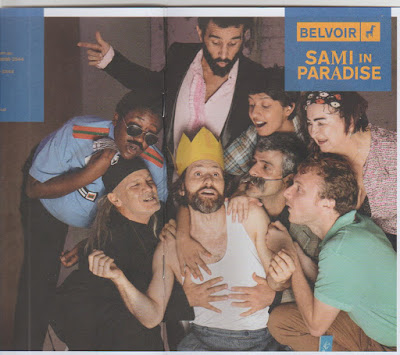 Sami in Paradise.  Based on The Suicide by Nikolai Erdman, adapted by Eamon Flack and the Company.  Belvoir at Belvoir St Theatre Upstairs, Sydney, April 1 – 29, 2018.

Thematically sincere, though theatrically a mess, Sami in Paradise has tried to use a Russian comedy from 1928 – about the incompetent confusion which was the Bolshevik Revolution of 1917 – to say something about the impossibility of living in a refugee camp in modern times.

The central figure, Sami, concludes he must kill himself, but he must justify his death as being for the good of all humankind.  The Chekovian philosophical angst is very Russian – which in 1928 made excellent comedy, I’m sure (until Stalin made sure the great directors Meyerhold and Stanislavski abandoned their productions, and Erdman was exiled to Siberia in 1933).

But despite the obvious enthusiasm of the Company in their research, where everywhere “we found quotations, people, events which bore an uncanny similarity to lines, characters and situations in the play” and made them ask “Why would life as a refugee bear such a resemblance to life in Stalin’s Russia?”, their conclusion that “Perhaps [it is] because both regimes seek to treat people as a problem to be solved” has not led to an effective satiric comedy, which might stir Peter Dutton to send Belvoir to Siberia.

Theatrically, I guess I have to sheet the failure home to the adapter / director Eamon Flack.

Comedy can range from frantic farce through inconsequential humour all the way to bitter black satire.  This largely group-devised show has bits of all these entering and exiting all over the shop.  Though we get the basic idea that it’s funny to see absurd behaviour which mostly does not seem to have any understandable motivation, and on the other hand there is a kind of anxious laughter in the tension of watching Sami trying to persuade himself to shoot himself (in the mouth?… through the temple?…through the heart?…oh, which side is my heart, left or right?…), the ‘plot’ fizzles away in the end.  Would it have been more funny, humorous, satirical if he had succeeded in killing himself?  Was it satirical, humorous or merely funny as he appeared and disappeared in and out of his coffin?

I really couldn’t tell by the end how this play told us anything new, or funny, about being a refugee.  Until, after the first round of applause, we were asked, very and sincerely seriously, to donate money to an organisation that helps refugeees to find ways to support themselves as independent agents.  Even though during the play, one of the most telling sections of potential satire criticised do-gooder NGOs for satisfying their own needs for doing good on a continuing basis, rather than actually solving the refugee problem at its political core.

Seeing Sami in Paradise made me see that the modern refugee problem is not the right material for comedy, despite the apparent parallels with a Russian play from 90 years ago.