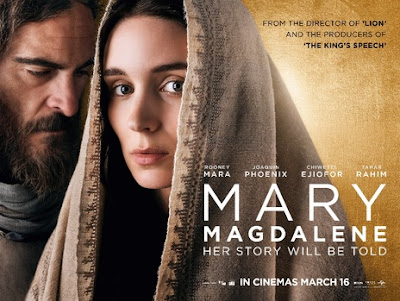 She was canonised a saint centuries ago, but it seems that the in-fighting among Christians over Mary Magdalene, the only female disciple, has continued. Who was she? A fallen woman or a steadfast virgin?

The new film from Garth Davis, who directed Lion with such restraint and empathy, wants to set the record straight about the kind of gal she really was. It’s admirable, though I’m not sure I understand why any ongoing controversy should be resolved. She could have been one of life’s contradictions, for all we know.

The reputation of Mary Magdalene may not be sorted anytime soon, but I do like the way this film explores the woman she might have been. What her life was like before Jesus came along, what she wanted for herself and why she left her family behind.

The other thing I found intriguing – as a non-religious person interested in ideas - was the depiction of how a religion, any religion, might begin. Slowly, hesitantly, as a form of social resistance perhaps like any movement.

Life is harsh in 33 BC. Mary helps out when a woman gives birth, and she and her sisters haul in fishing nets heavy with the day’s catch.

However, an unusual lack of filial duty marks her out as a rebel who will not follow the path that her father and brothers have determined for her. She refuses to marry and chooses instead to follow a man called Jesus who is in the area. As the man of the people with a low-key but revolutionary message, Joaquin Phoenix is surprisingly plausible.


More interesting is the take on Judas Iscariot, audaciously depicted as personable and attractive, and just another impatient young man who wants Jesus to get on with the revolution

Davis’ film is set in the beautiful, stark, bare bones of southern Italy. The Australian cinematographer Greig Fraser, who worked so impressively on films like Bright Star and Zero Dark Thirty, was behind the camera. The otherworldly score is the work of the (late) Icelandic composer, Johan Johannsson and the cellist Hildur Guðnadóttir.

The film’s attention to period detail also helps make for an immersive experience. It takes you back in time to the shores of the Sea of Galilee and the city of Jerusalem, and the lives of ordinary people under the Romans. It offers its own kind of social realism.

Unfortunately the film lets itself down in trying to establish why Mary joins the disciples following Jesus. We get instead a number of vague, dreamy sequences of her descending into the blue depths as though her baptism was a rehearsal for oblivion.

And the conversations that she has with Jesus aren’t particularly persuasive support for her actions either. She could be simply be seen as a girl who didn’t like the man her family had chosen for her to marry. There could have been so much more to this.

Much more interesting is the film’s take on the figure of Judas Iscariot, who is audaciously depicted as personable and attractive, and just another impatient young man who wants Jesus to get on with the revolution. The French actor of Algerian descent, Tahar Rahim, with an open, smiling face incapable of dissimilitude, shapes a character who is bound for disappointment when the kind of revolution Jesus has in mind becomes clear.


Sometimes trance-like, cultish and surely not what the filmmakers intended

Rahim, by the way, emerged on the scene of the international film industry as a petty criminal caught up in inmate politics in prison in A Prophet, a powerful film directed by Jacques Audiard.

The black English actor, Chiwetel Ejiofor, is also memorable at the disciple Peter. A small part.

After two hours of screen time, there is not enough to know about Mary Magdalene. The alabaster serenity of Rooney Mara as the main character reveals so little of her motivations that watching her story unfold is sometimes like taking part in a waking dream. Sometimes trance-like, cultish and surely not what the filmmakers intended.

Actually, screenwriters Helena Edmundson and Philippa Goslet, have, while undertaking to write one story, written another. Mary Magdalene isn’t especially about its stated subject, who is still just the witness, but about how a religion or a movement might be born.

Despite wanting to reveal more of the true nature of Mary Magdalene, the film offers a low-key study of Christianity in its early days, and why Jesus was eliminated as a dissident.

From the paintings of the masters like Rubens and El Greco to the blockbusters based on the writing of novelist Dan Brown, it is clear Magdalene has intrigued artists and writers for centuries. Surely the curiosity over her true nature will continue. She was a woman in a man's world, after all.