When Oscar Wilde’s Lady Windermere’s Fan first premiered in the last decade of the nineteenth century, the things it explored would have been quite risqué. Infidelity and sexuality were (at least in the common understanding of Victorian society) things not to be spoken of, which may be the reason Wilde – gnomic purveyor of the salacious drawing room witticism – seems so coy in this play. His characters – the painfully young and puritanical Lady Windermere (Zoë Tuffin) and her stitched-up husband Lord Windermere (Ross Walker) – tiptoe around all but the cleanest of subjects, allowing the audience and the more dynamic characters Lord Darlington (Adrian Flor), Mrs Erlynne (Christa de Jager) and the Duchess of Berwick (Liz Bradley) to smile archly, twitter knowingly, and generally feel superior (an emotion Saint Oscar himself was very likely familiar with).

Wilde’s fin-de-siecle comedy of manners, in which the gauche Lady Windermere is led to believe that: a) her husband is having an affair with the fallen woman Mrs Erlynne, and b) that the appropriate response to such news is to elope with Lord Darlington (he of ‘I can resist everything but temptation’ fame) rather than to tell Lord W to foot it, is in this version updated by Tony Turner and the folks at Rep – but not totally.

Turner is cognisant of the play’s general outmodedness; the manners and mores of Victorian society do not fully mesh with our own. (Having said that, if I found out that my spouse was giving large sums of money to women of dubious repute, who he then insisted I invite to my own birthday party, I’d probably chuck a tizzy, too). Turner does not, however, simply plant Lady Windermere et al in 21st Century London, along with F-book, Twitter, and iPhones. To bridge the gap between Wilde’s world and our own, Turner has set the show in the entre deux guerres period, complete with bobs and dropped waists on the ladies and a monolithic modernist set done in sorbet colours, courtesy of Quentin Mitchell.

The cast do a fine job of capturing the moral ambiguities of Wilde’s script. I confess I enjoyed the bad characters far more than I enjoyed the good ones: Bradley’s Duchess was zestfully delicious, while de Jager’s Mrs Erlynne combined complicity and sass in a winning performance. Jerry Hearn was another delight as the crusty, baffled Lord Augustus. I must also confess that, having retained the upper-class English setting, I do wish that Turner had made a bit of extra effort with some of his actors in retaining the upper-class English accent, but this is a minor quibble. The costumes are sumptuous, the players attractive, and the Repertory crowd has a grand old time - which makes me think of Wilde’s apparent words after the first performance:

“Ladies and Gentlemen. I have enjoyed this evening immensely. The actors have given us a charming rendition of a delightful play, and your appreciation has been most intelligent. I congratulate you on the great success of your performance, which persuades me that you think almost as highly of the play as I do myself.”
Posted by Canberra Critics Circle at 1:12 PM

Bangarra is dance theatre for people who aren’t particularly interested in dance or the theatre. Such is the magic they weave over audiences.
Following Bangarra’s twenty-year anniversary and retrospective last year the pressure was on for Of Earth And Sky to herald a new era for the company. The hotly anticipated double bill pairs new work ‘Riley’ by emerging Choreographer (and Canberra expat) Daniel Riley McKinley and ‘Artefact’ by the acclaimed Frances Rings.
McKinley’s spark of inspiration for his choreographic debut was the minimal yet powerful work of his cousin and well-known photographer the late Michael Riley. I had seen the images from Riley’s Sky Series on exhibition at the National Gallery of Australia, and there they had left me a little cold. But now, in massive projection above the stage and retold through movement, the images burst to life.
Six images were interpreted by McKinley, each of them symbolic of stages of Riley’s life journey. The aggressive rhythm of ‘Locust’ created a crescendo of excitement about what was to come, subsequently tempered by the ominous regimentation and unsettling black crucifixes of ‘Bible’. The duet ‘Angel’ exuded a somber, simmering strength and ‘Feather’ swung between beauty and pathos, hope and loss, ending ‘Riley’ with the gravity of its namesake’s voice ringing posthumously through the theatre. 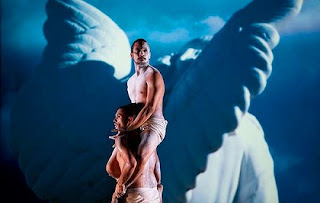 Following interval ‘Artefact’ commenced with quiet power. In the half-light two dancers emerge from a huge and sumptuous possum skin cloak; Plumes of ochre powders unfurling from the fur and dancer’s bodies contributing to an intoxicating mysticism.
From here the cast proceeded to interpret other traditional objects - such as the grinding stone or coolamun - and important traditional practices such as weaving. The closing piece of the same name left the audience spellbound and aching for more.
With ‘Artefact’ choreographer Rings is bringing to light the uncomfortable positioning of culture as curiosity and the treatment of a people as specimen. The objects are simply a starting point through which to reclaim ownership; to delve into the deeper meaning and associations they possess beyond the anthropological surface.
An innovative set and incredible costumes help realize this vision, sensitively setting the scene and adding a warmth and tactility. The score by David Page perfectly rounds out the sensory experience.
In the pre-show Q and A session, Rings spoke passionately about Bangarra’s intention for their dance works to act as a starting point for audiences to gain a fuller understanding of Indigenous culture; a culture that the company comfortably encapsulates so many aspects of. There are the views of both urban Indigenous people and those living traditionally, stories from the past, reflections of the present and visions of the future. With such breadth, accessibility and eloquence, Of Earth and Sky is another solid step towards Bangarra’s ultimate aim, leaving the audience both moved and changed.

This review appears in issue #356 of BMA Magazine
Posted by Canberra Critics Circle at 9:15 AM

OF EARTH AND SKY

A tall figure clad in a dusty possum rug appears out of the darkness. Suddenly an arm, then a man's torso, appear above the rug and we realise that this is in fact two bodies, (Daniel Riley McKinley and Leonard Mickelo) who intertwine in a series of striking images which commence Frances Rings' remarkable "Artefact".

Utilising objects central to aboriginal life as her inspiration, Rings has fashioned a series of intriguing dances around string bags,  weaving, grinding and even the aboriginal body. Her mesmerisingly fluid choreography is superbly performed by the company in a work that is visually ravishing, theatrically satisfying and spiritually uplifting.

There was considerable interest in the opening work, "Riley", choreographed by former Canberra dancer Daniel Riley McKinley, and the audience was not disappointed. Drawing his inspiration from photographs by his cousin, Michael Riley, McKinley has fashioned a lovely work which also draws on familar objects,in this case a feather,locusts and a bible. McKinley's mastery of imaginative group movement was evident in the opening movement, "Boomerang", while the achingly beautiful imagery of the duet, "Angel", danced by Waangenga Blanco and Leonard Mickelo remains imprinted on the mind.

Both the works which made up the program benefited from Jacob Nash's simple, inspired settings, both brilliantly lit by Damien Cooper, and from the imaginative costumes of Gabriella Tylesova. But most particularly from David Page's brilliantly evocative soundscapes which have become so much a part of the Bangarra experience.

(An edited version of this review was published in the September 9 -15 edition of "City News".)
Posted by Canberra Critics Circle at 4:40 PM

"Gwen in Purgatory" is a new play by Queanbeyan playwright, Tommy Murphy, who already has another  play "Holding the Man" running on the West End in London.

Interestingly, this play is set in Queanbeyan, and focusses on a fiercely independent 90 year-old widow, Gwen, who, following the death of her husband, and against the wishes and advice of her family, buys herself a brand new three-bedroom house, complete with all mod.cons; the first house built in a new housing estate.

As the play opens we find Gwen, alone in the huge family room, surrounded by unpacked boxes, trying to cope with the phones, the remote controls for the microwave, the airconditioning and the burglar alarm. One by one various members of her family arrive to assist her, although Gwen insists she is confident she can manage alone. Several arguments result as Gwen fights for her independence during which some devastatingly shattering home-truths emerge.

Directed by Neil Armfield, "Gwen in Purgatory" is funny ...on the surface. The performances are superb, particularly those of Melissa Jaffer as Gwen, and Sue Ingleton as her wretched daughter, Peg. Grant Dodwell plays Gwen's self-serving son, Laurie, Nathaniel Dean,  her equally self-serving grandson, Daniel, and Pacharo Mzembe plays Father Exekiel, a young priest who inadvertently finds himself involved in the family arguments.

However, beneath the highly amusing surface, Tommy Murphy has managed to pack quite a few solid punches which challenge our attitudes to growing old, how we treat our elderly, and indeed, how we priortise our lives. Compelling and thought-provoking, "Gwen in Purgatory" is a play I haven't been able to get out of my mind. I like that sort of play.

(This review was broadcast by Artsound FM 92.7, during "Dress Circle" on Sunday 29th August 2010)
Posted by Canberra Critics Circle at 5:01 PM 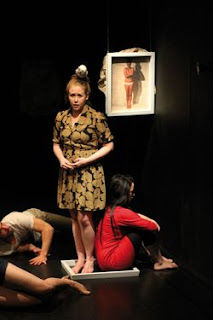 My review of Autumnal Collective's debut work 'Exciting A Blush' appears in the latest issue of BMA Magazine. To read the online version please click HERE

Can't wait to see more from this exciting group of performers!
Posted by Canberra Critics Circle at 1:01 PM