THE SHAPE OF WATER


Guillermo del Toro had the actor Sally Hawkins in mind for this sensuous dark fantasy from the beginning. Once, when he bumped into her at a party, he told her he was writing a film about how a woman falls in love with a fish. She said ‘great’, though she might have wondered what this director famous for gothic horror could have possibly have been planning.

The director has conjured up some dark fantasies, like the political allegories The Devil’s Backbone and the very wonderful Pan’s Labyrinth, but this time it’s different, as he says himself. And surely, Hawkins has no regrets at all about signing on to this dazzling adult fairy tale. It is outstanding on many levels, reflected in the number of Oscar nominations.

The Shape of Water is set in a shadowy, green-tinged world – that is, early 1960s America in the grip of Cold War paranoia - where everyone, from the janitor to the boss, has a secret. The mood is perfectly rendered in expressionist chiaroscuro though the palette warms when Elisa (Hawkins) is on screen.

Elisa has her own sweet approach to life even though she had the misfortune to grow up an orphan and she cannot speak. A creature of habit, she cleans her shoes every day before work and takes a bath. She times this – she is obviously a water person - but is regularly a little late in clocking on for work at the research facility where she is a cleaner, for reasons that will become apparent.

In her life she has her loyal friend at work Zelda (Octavia Spencer), a kind neighbour Giles (Richard Jenkins), and in between she can romance herself with Hollywood musicals and absorb the ambience of the cinema downstairs. The sensitivity of Hawkins’ performance and del Toro’s skills orchestrate the utterly plausible—she falls in love with a scaly creature from a lagoon in the distant Amazon. The amphibious man has been captured and is a ‘top secret’ asset in a tank at the lab.

More man than fish, the hunky creature she falls for has a humanoid face, arms and legs and can live on land for limited periods. Inside his skin-tight scaly suit, with webbed, clawed hands and dorsal spine, the actor Doug Jones creates a marvellously imposing figure, frightening but obviously terrified. 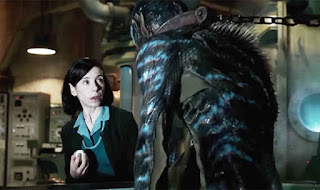 Showing little interest in this extraordinary creature and treating it as a threat, CIA officer Strickland (Michael Shannon, performing even more extreme than usual) wants to beat it into submission and then dissect it. That is before he has worked it over with a cattle prod.

His attack on 'amphibious man', fuelled by irrational fear, is the complete antithesis of Elisa’s approach. From the very first, even when the creature lashes out at her from behind the glass of his tank, she doesn’t seem to have the slightest fear—which is rather surprising, really. They have things in common, and with boiled eggs and a bit of jazz from Glenn Miller, she brings him round.

The Shape of Water becomes a love story that transcends difference, and we are all in raptures over the gorgeous monster from the deep. Glorious to look at and experience as an integrated sensory experience, the film leaves behind an afterglow, even if the good and evil binaries of the fairy tale leave little to mull over after the closing credits. It’s all about feeling, and is a swooning, romantic experience that is rarely seen on screen.

Although del Toro does not let us off entirely lightly in the few moments of savage violence here, it is only as a brief interlude. There is wit and humour and other means of seduction to show that this master of gothic horror and dark fantasy, who cut his directorial teeth on monster movies, knows exactly how to keep his audiences under his spell.

Also published on Jane's blog and broadcast on ArtSound FM 92.7

Posted by Canberra Critics Circle at 11:37 AM

My Urrwai - Sydney Festival at Belvoir 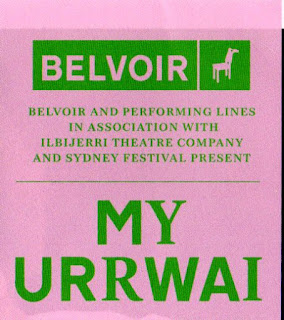 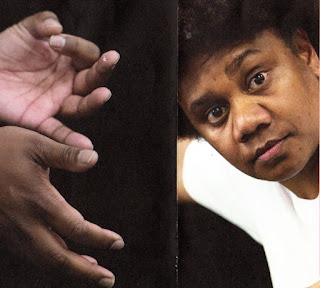 My Urrwai created and performed by Ghenoa Gela.  Belvoir and Performing Lines in association with Ilbijerri Theatre Company and Sydney Festival, at Belvoir Downstairs, January 20 – February 4, 2018.

Performing on stage is always a risk (break a leg!), but the greatest risk – to your sanity, if not in failing your audience – is to turn your own life into a public performance, and then perform it yourself.

For Ghenoa Gela to show the rest of us her personal salvation in re-connecting with her traditional culture is clearly more than a passion.  It’s a necessity as much for her sake as for ours.

Fortunately, for us as well as for her, the family into which she was born in Rockhampton did their best to maintain their previous Torres Strait singing and dance culture from Moa (where Ghenoa's mother grew up in St Paul's Village), and Erub (Darnley Island where her father hails from), despite all the influences from Christianity and economic forces which set aside the past – even on the Islands themselves.

What a revelation it was for Ghenoa to be taken on a visit “home” to Moa, discover the reality of her culture as she nervously performed traditional dance, only to realise that people at home had forgotten the very dances that she had been taught at “home” in Rockhampton.

As she learns what it feels like to understand her place as the holder of knowledge for her people, we experience with her that great impact.  When Indigenous people say how important is their culture, we can now understand what they mean.

We also discover that Ghenoa is a magnificent performer in a rather different context – the one which has taken her, for example, to the Edinburgh Fringe and even to So You Think You Can Dance – Top 100 on tv.  She can make all of us, from whatever culture, laugh along with her as much as be fascinated by her story.

I have noted Ghenoa’s initiative before, such as her choreographing – for the whole company – of the finale for Kate Champion’s Nothing to Lose (Kate’s last show as artistic director of Force Majeure, reviewed here January 23, 2015), so I am not surprised Ghenoa has chosen to ask Kate’s advice as dramaturg for My Urrwai.  And, of course, to have another strong Indigenous woman in Rachael Maza to direct the production has guaranteed the solution to that potential problem of the risk of performing not only your own work, but your own self.  Add in the strongly creative input of Michael Hankin and Ania Reynolds for the visual and sound landscape for Ghenoa’s journey, inventively lit by Niklas Pajanti, for work which seems to me to be a new original and significant form, which I’ll call Theatre of the Personal Self.

If ever there was a need for cross-cultural understanding, and surely we need this more than ever before in our time of political divisiveness, Ghenoa Gela’s work is essential viewing.


Posted by Canberra Critics Circle at 10:03 AM 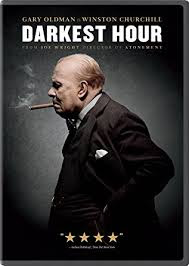 If the impression we get is really true, rather than chosen for dramatic effect, Winston Churchill behind the scenes was not the type of person who was exactly inspiring. He was prone to being intemperate and disinhibited, an unabashed eccentric who it is hard to imagine could survive today’s social media.

Darkest Hour, from Joe Wright who directed the wonderful film Atonement, is about a low point at the beginning of WWII when Britain was at its most vulnerable.

Who would be leader? Should the country broker for peace? The film focuses on how Churchill became Britain’s Prime Minister in the dark early months of the war, when how he led it to victory over the next five gruelling years is the more familiar story.

Churchill had always been a controversial figure, dividing political opinion, until he spoke of course, or wrote. There were numerous books and newspaper articles as he languished in the political wilderness while Hitler rose to power.

His appointment as PM seemed like an act of desperation, in the absence of anyone else prepared to take the job. While others were unwilling to take the lead, he could at least unite parliament.

Appeasement appeared to be the only option in 1940 and a peace treaty was possible, brokered through Mussolini. It even seemed an attractive safer option, as the British people could hardly be expected to give up another generation of their young.

It is fascinating to see in this fine film how difficult it was for Churchill in the first weeks of office to actually turn down the offer of a peace deal with Hitler. Darkest Hour concentrates the mind on that moment at the crossroads when Britain very nearly went under the wave of the fascism that was engulfing Europe.

The dedication and zeal that we have become accustomed to from actor Gary Oldman dominates the screen in his central role, as it should. It is a remarkable, immersive performance, and a feat of endurance to appreciate when we understand how long it took to apply the prosthetics in the morning and carry the weight for the rest of the day’s shoot.

But does the performance provide much more insight into Churchill’s personality? Perhaps not. Albert Finney also portrayed Churchill very convincingly in the recent The Gathering Storm.
The appearance of Ben Mendelsohn, however, as King George VI, that other wartime leader who was also loved, was a welcome surprise. Mendelsohn once again shows range and depth.

To move the action out of dusty rooms and corridors of power full of indistinguishable men in suits, Wright takes the camera into London’s streets. Some signature long tracking shots capture the daily life that must go on: the commuters, the shoppers and the vendors—and the three boys larking around in Hitler masks.

A shorthand for showing how Churchill understood the mood of the people was his relationship with his staff, especially those intimately connected with events that he had a hand in directing.
However, in the fictional sequence in which he nips down to the Underground and takes the train to Whitehall to gauge public opinion or, more to the point, to confirm his understanding of it, the film makes an awkward turn.

Churchill musters a straw poll that today’s politicians would die for, but the film suffers a minor lapse in credibility.

Leaving off where the recent Christopher Nolan film Dunkirk begins, Darkest Hour closes around the time a little armada of citizen boats sets out across the Channel to rescue hundreds of thousands of troops trapped on the beach in France. It's a stirring sight against a background of white cliffs that signifies a general resolve, and worth contemplating that the event might quite easily have never taken place.

Also published at Jane's blog and broadcast on ArtSound FM 92.7