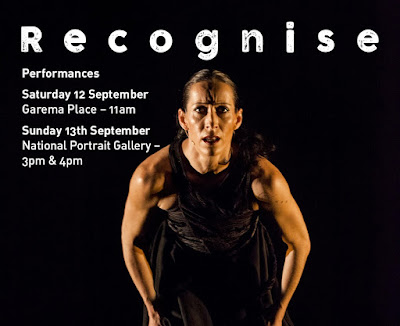 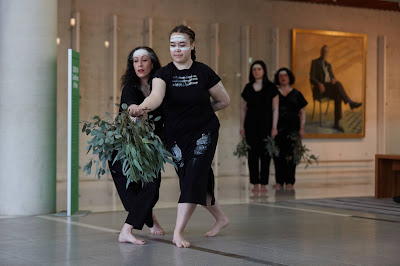 CANBERRA STRINGS last performed in September 2019 and one could feel the exuberance and see it in the faces of the musicians, as they prepared to play “live” again, after such a long break.

Schubert’s “String Quintet in C” is notable on many fronts.

Firstly it was written only six weeks before Schubert died - his last chamber work.

Also, it was published posthumously some 25 years after his death.

Thirdly, it is the only piece in the quintet repertoire which calls for two cellos.

Finally, there is no existing hand-written original score. The work has been drafted and pieced together by many different publishers and music scholars over the years.

Gilby and her compatriots have spent months comparing different published versions of the piece and for this concert came up with what they consider to be an authentic musical account of Schubert’s intentions.

Later in the movement Lucy Carrigy-Ryan on viola played complex triplet work, taken over by beautiful duet passages where she was joined by second cellist Payne.

Both the second and third movements revealed sudden musical mood changes, ranging from lively, engaging and joyful playing in a major key, to sudden dark, slow, almost menacing motives and phrases in the minor.

The viola combined with second violin played beautifully by Pip Thompson, contributed significantly to the mysterious sounds emanating from the quintet by playing on the off-beat.

All these unusual, sometimes perplexing and unpredictable characteristics have been summarised by many over the years to reflect Schubert’s own despair at what he considered his nearing and impending death.

Certainly, Canberra Strings captured the conflict of confusion and sadness interspersed with joy and happiness superbly. One could feel the human emotions of drama, struggle and particularly the uncomfortable, perhaps frightening prospect of the unknown from their playing.

The final movement bounced into life - yes “life” - with an almost Hungarian dance style of writing and playing, featuring the two cellos both in unison and fifths, adding a wonderful, solid bass foundation, supporting the exciting and exuberant playing of the viola and the two violins.

Throughout the performance, Barbara Jane Gilby on first violin led her ensemble with discreet precision, and bold projection, resulting in ensemble playing of great feeling, emotion and unity.

WHAT THE BUTLER SAW

Don’t think that because Joe Orton’s ‘What the Butler Saw’ was written in the 1960s it must be hopelessly out-dated.  The manners, morals and authority figures that Orton targets in this ferociously satirical play still need skewering fifty years after the play was written.  Back then people were more open about their beliefs and ‘standards’.  In these supposedly more enlightened days, we just make sure what we say is politically correct instead.

‘What The Butler Saw’ was first performed in London in 1968.  The playwright, Joe Orton, was already dead, having been murdered by his gay partner a couple of months previously.  Although he wrote only a small number of plays during the 1960s, including ‘Entertaining Mr Sloan’ and ‘Loot’, the impact of his work was considerable and highly influential on later writing.

Orton’s play is critical of the society of the time, especially attitudes to sex, double standards, the medical profession, privilege, authority and power.  His writing shocked and offended audiences at the time.  These days we’re not so much shocked as surprised at how many of the same issues are still around.  We don’t seem to have come very far at all.

In the play, a psychiatrist, Dr. Prentice, is seen interviewing a young woman, Geraldine Barclay, for a position as his secretary.  His interview methods are highly inappropriate and, with the unexpected arrival of his wife, he needs to hide the girl, now naked, from view, leading to a succession of farcical situations.  Every character in the play has secrets which add further complexity to the situation.

Director, Liz Bradley, has given us a strong production with fine performances from her cast of six.  While she has it moving at break-neck speed, Bradley ensures that the line delivery is carefully considered and spoken by her actors.  While you can enjoy the show just as a typical farce, the physicality of the production is secondary to Orton’s ideas.

David Cannell gives a fine performance as Dr. Prentice whose world is suddenly crumbling around him and Zoe Swan is a delightfully innocent Geraldine Barclay, the prospective secretary.  Lainie Hart, as the bustling, formidable Mrs Prentice, who has secrets of her own, is very funny and Peter Holland gives a well-judged frenzied performance of towering insanity as Dr Rance, an official sent by the Government to investigate Dr. Prentice’s methods.  Glenn Brighenti brings a youthful and confident cheekiness to his role as the blackmailing hotel bell-hop and Thomas Hyslop nicely combines the surface cliché of the policeman, Sergeant Match, with a seething decadence underneath.

Quentin Mitchell has designed a fine set for the show with some fun surprises and Anna Senior’s costume designs are just right for the characters. 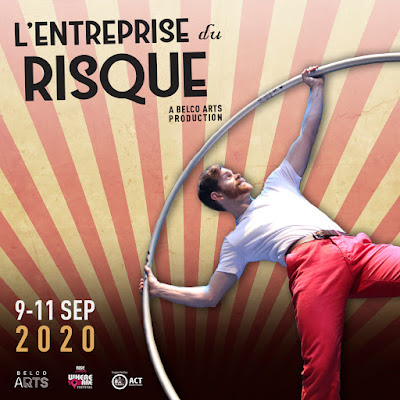 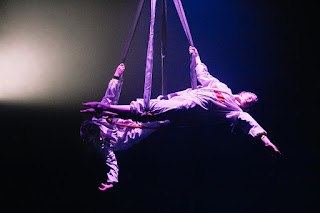 L'ENTREPRISE du Risque opens with the four performers enveloped by white hazmat suits. One removes their hood and discovers the air is clean. The others follow their lead, gulping fresh air. Is it safe to breathe again?

Even in Shakespeare's time, pandemic closed the theatres.

This circus grapples directly with the challenge of staging live performance in the age of COVID-19, with creative producer Sammy Moynihan inviting us to reconsider our relationship with risk.

Like 2019’s Cirque Stratosphere, there was a strong focus on aerial acts including hoops, trapeze and ropes. Veteran aerialist Bernard Bru demonstrated his strength by hanging from a crescent moon, while performer Jake Silvestro brought panache to spinning inside a giant ring. Warehouse Circus performers Imogen Drury and Clare Pengryffyn completed the quartet with polished hoop acrobatics.

The routines were serious and precise rather than flamboyant, with the emphasis on awe at the strength and skill of the performers rather than the thrill of their danger.

By pairing the aerial acts with a voiceover defending risk-taking, the production drew a parallel between the prudent manner in which the performers approached the risk of gravity, and the social distancing measures in place at the theatre to manage the risk of infection.

Lighting design by Linda Buck kept the cavernous theatre dark, with spotlights focused on the performers.

This spartan approach created a contemplative and reverent atmosphere.

Running for an hour, this inaugural production by Belco Arts felt like a taster for more ambitious works in the new theatre.

With the future uncertain, this defiant circus asks us to consider what we will risk to be part of live performance again.