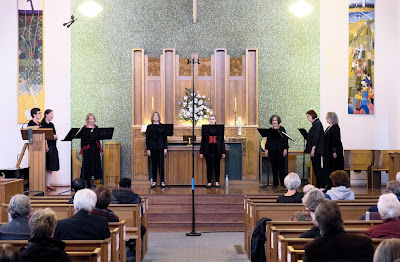 Reflection: Music for introspection and remembrance

Polifemy’s concert showed without a doubt why it’s an entirely different experience listening to music live rather than from a recording.

It was stated in the program that ‘the concert comprises music for quiet reflection in a year of disruption and loss’.  It could also add that it was music to make your heart soar.

Polifemy is a small female ensemble established in 2008 to explore music written and performed by nuns in the 15th and 16th centuries.  Directed by Robyn Mellor, the singers, including Mellor, demonstrated in this concert that they are supreme vocal artists, able to sing this early music a capella, accurately and with great feeling.

The concert commenced with the music of Cristóbal de Morales of the 16th century.  His ‘Office of the Dead’ is a prayer cycle for the repose of lost souls and the group of singers set a high standard right from the start with their accurate and disciplined singing.

It was followed by ‘Hostias et preces tibi Domine’ (We Offer Thee, O Lord) by Luigi Antonio Sabbatini from the 18th century, a haunting work full of intricate harmonies.  It was performed with clarity and delicacy.

Works by the 15th century composers, Orlando de Lassus and Giovanni Palestrina, were next.  The chant ‘Requiem aeternam’ by Palestrina was sung by the four sopranos only.  Their beautiful singing of this piece was one of the highlights of the concert.

William Byrd’s ‘Mass for 3 voices’ was written in the 16th century while Byrd, a Catholic convert, was a member of the court of the Protestant Queen Elizabeth I.  It was a dangerous position for a Catholic to be in and the compositions were sung in secret under threat of death if discovered.  The singers gave an excellent performance of this work with the Sanctus and Agnus Dei especially memorable.

The conclusion to the Requiem Mass, ‘In Paradisum’ was a perfectly chosen and uplifting finale for the concert.