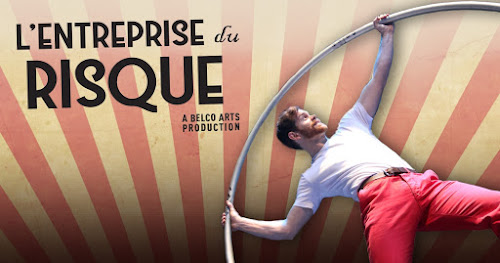 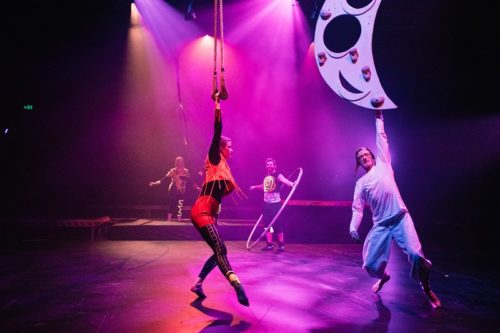 There is something exciting about entering a newly built theatre that has been carefully designed to arouse the senses, inspire the curiosity and offer am promise of new experience. It is the feeling I had as I entered the newly built theatre at Belconnen Arts Centre to see the opening production of L’entreprise du Risque. I like others have taken the risk to attend the first production of a circus piece in the new theatre. Belconnen Arts Centre’s inaugural production takes place in a fully equipped Black Box. Flexibility should be a theatre’s most striking feature. Flexible seating allows for flexible staging in the round, thrust, open ended, proscenium or traverse. It is a theatre that can challenge perception, arouse the senses and take audiences on a new and dynamic journey.

At this time of Corona virus, restrictions determine the presentation of a new piece of theatre and audiences at the opening of L’entreprise du Risque were seated i.5 metres apart, drizzled hands with sanitizer at the entrance and wore masks if they chose. Four performers took audiences on a whimsical, and gently unfolding display of circus skills. Four figures emerged from the haze and through the shafts of light that lent the space an air of mystery.  Jake Silvestro slid down a rope from above. Other members of the ensemble, Bernard Bru, Clare Pengryffyn and Imogen Drury  emerged from three corners of the space to join him. Each appeared to be wearing personal protective gear. On the floor they removed the protective head gear and the analogy appeared unmistakable. They were taking the risk to expose themselves to the atmosphere and strive for freedom from the restrictions that bound them.

The world of circus is the arena of risk, testing strength, pushing the boundaries and challenging the skill to succeed. The small company of four took on the challenges with work on the trapeze and the ropes, aerial acts on the equilibrium ladder platform and aerial hoop and  physical daring on the cyr wheel.

L’entreprise du Risque has a distinctly French flavour, not only because of  Bernard Bru’s venerable influence, but also because of the seductive soundtrack and the atmospheric lighting effects.  Silvestro’s introductory soaring on the cloud swing rope and daring floor slides introduce a feeling of exhilaration, of liberation from the confines of space and surface. This escape from the constricts of control is captured in Pengryffyn’s work on the aerial hoop in a display of controlled grace and strength. Here is a promising performer, who is certain to be seen on larger circus stages in the future. Her strength is complemented by Drury’s graceful dance and acrobatic backflips.  Mentor and leader of the troupe, Bernard Bru shows that age should be no barrier to the experienced exponent of the circus arts. His balance and strength on the equilibrium aerial ladder and aerial hoop  though no longer the daredevil bravura of the younger gymnast enchants with a soulful touch of French whimsy in his Man in the Moon act, while Pengryffyn watches on from the floor as a young girl entranced by the vision above her.

What L’entreprise du Risque has in charm and skill, it lacks in tight direction, showmanship and flair. Experience is varied  and the show is a display of uneven expertise, Silvestro is obviously an accomplished circus performer whose talent lends the show a dynamism that is not apparent in the work of the two female performers from local Warehouse Circus. They are accomplished apprentices and committed circus performers but are still learning the trade and developing their skills. I understand that the show was also to include a clown who would have been able to cover the pauses between acts while the company set up the equipment with the stage manager. Drury’s obvious dance and acrobatic skill could have possibly filled in the gaps and maintained both a continuity and the audience’s absorbed enjoyment of the performance.

That said, “L’entreprise du Risque offered an enjoyable and welcome return to live theatre at the Belconnen Art Centre’s beautiful new theatre. I look forward to the forthcoming dance work Mess which will be staged in October and offers yet another innovative entertainment as a part of the Centre’s  adventurous artistic programme.