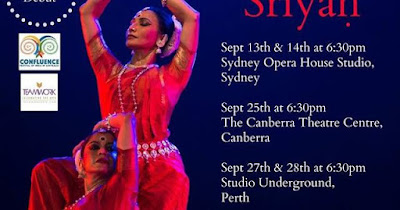 Watching the dancers of the Nrityagram Dance Ensemble it was impossible not to be reminded of those statues of Indian temple dancers striking exotic poses. Not surprising when you realise that the exquisite dancers you are watching on stage are performing exactly the dances that inspired those poses.

The three dancers with the Nrityagram Dance Ensemble, Surupa Sen, Bijayini Satpathy and Pavithra Reddy,  have devoted more than 20 years of their lives to preserving the art of  Odissi dance, and ancient and sensual dance-form on performed in temple courts for kings.

Six days a week, twice a day, they rehearse twice a day perfecting the intricate moves which involve the whole body, especially the eyes, feet and legs and of course the beautiful finger movements.
Appearing in Australia for the first time, as part of the ambitious Confluence Festival of India in Australia, the Nrityagram Dance Ensemble consists of the three dancers and four musicians. The musicians sit cross-legged on one side of the stage, and play a drum, a violin, a flute and a wood accordion. One of the musicians also sings to accompany some of the dances.

Otherwise the stage is bare, apart from the musicians and a decorated deity figure positioned in a spotlight on the opposite corner to the musicians. Subtle lighting suggests various moods so that the attention of the audience is squarely focussed on the performances of the sumptuously costumed dancers.

This performance commenced with candles being placed before the deity heralding the entrance of each of the dancers to pay homage before launching into a trio for which the three dancers moved in perfect unison and synchronisation. This dance allowed the audience to appreciate the subtleties of the Odissi technique perfected by the dancers over years of devoted practice.

The dancers then performed a succession of exquisite solos, duets and trios. Perhaps the most memorable being a first century prayer for which the solo dancer executed a series of intricate hand, eye and body movements which perfectly interpreting the meaning of each word.

Frustratingly, there were no printed programs to accompany the performance, so that the audience had no way of knowing which dancer was performing which dance, and although some items were preceded by a cultured voice-over announcement, the unfamiliar names were meaningless.
This was an unfortunate oversight, as these dancers and musicians are among the countries most accomplished artists who have devoted their lives to becoming guardians of some of India’s most important cultural history.

On discovering the lack of programs, this reviewer approached an accompanying official to request details, only to be directed to the Confluence website where, the official assured, full details would be found. However, apart from some general information about the company, there are no names of dancers or musicians or of the items performed, on this website.

The names in this review are extracted from the captions on the photographs on the website. 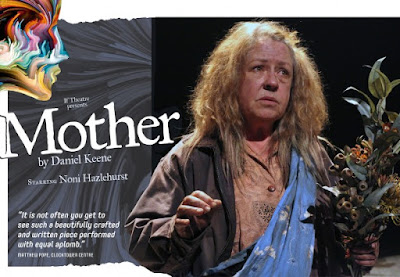 ‘I might stink but I know me rights’, says Noni Hazlehurst’s character, Christie, in Daniel Keene’s play, ‘Mother’.  Set in a rubbish dump, this one person play is an absorbing study of a lonely woman who has descended to a rock bottom existence.  How and why she got there is the basis for this strong, confronting but entertaining play by Daniel Keene.

Christie’s problems seemed to begin with an unsatisfying marriage and a few drinks with a neighbour.  From there it was a short journey to alcoholism, not providing proper care for her baby son, alienation from her husband and ultimately homelessness, cut off from society.  Daniel Keene’s play presents a vivid portrait of a tragic character most people would avoid contact with.  By the play’s end we really feel for this woman but we’re also left with that uncomfortable sense of how easy it could be to end up the same way.

Daniel Keene has written a play of great depth.  The level of detail in the character of Christie is extraordinary.  The conversations from the past that she relates may be real or imaginary but the writer’s skill makes us believe what she is telling us.  Although the subject matter is confronting, there are flashes of dark humour here and there and even the use of very strong language at times is both funny and shocking.

Noni Hazlehurst plays the role of Christie with an uncompromising conviction but still shows the warmth of a needy human being underneath the tough exterior.  It’s a beautiful and memorable performance.

You’re almost unaware of Matt Scholten’s direction of the play but that is one of its strengths.  It is never theatrical in its approach, allowing the actress to move and perform with great naturalness.  Set, costume and props by Kat Chan, although deceptively simple have obviously been carefully thought out and are very effective. The sound by Darius Kedros is particularly well-designed and atmospheric and it’s all complemented by a nicely shadowy lighting design by Tom Willis.

A good play should give you more than just entertainment.  This one leaves you thinking deeply about life, love and compassion.

Len Power’s reviews can also be heard on Artsound Fm 92.7’s ‘Artcetera’ program on Saturdays from 9.00am.
Posted by Canberra Critics Circle at 11:10 AM 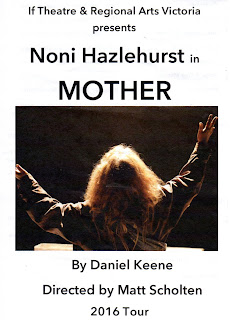 Noni Hazlehurst in Mother is not to be missed – and what a contrast to her wonderful reputation as arguably the best-remembered and loved presenter of ABC Playschool.

On one level, Daniel Keene’s solo character Christy in Mother took my mind back to the beginning of this Melbourne tradition: Jack Hibberd’s existential Monk O’Neill in A Stretch of the Imagination (at The Pram Factory, 1972, played by another Australian acting icon, Max Gillies).

But there’s a big difference.  Where Monk was a  representation of the Australian misogynist male recalling his memories (a la Samuel Beckett), for whom one can have very little empathetic feeling, Christy is the epitome of sadness.  Her memories may be confused by turps and early onset dementia, but the story of her marriage and the birth and death of her only child, the son she secretly names ‘Beau’, cannot fail to touch our hearts.

We did not care about Monk O’Neill as he approached death, except for its wider meaning that it was time for what we now call sexism to die.

For Christy we still feel hope as she glories in the fact of her continuing existence in spite of all that life has thrown at her.  Mother is a play of personal experience, and so seemingly less of an iconic drama of national identity, as A Stretch of the Imagination is regarded.  Yet Keene’s play balances Hibberd’s from a woman’s point of view.  Sexism still needs to die in 2016 as it should have done in 1972.

And in performing this woman, Noni Hazlehurst invites us in to Christy’s complex personality with the skills of a great actor.  Bit by bit we find ourselves putting into proper context Christy’s behaviour which ‘normal’people (like us) would think of as unacceptable.  Hazlehurst has such control of the detail of how Christy speaks, how she moves, how she responds to sounds (especially of the birds which have become so significant to her psychological state), and how she thinks, that our understanding grows from a conventional negative first impression to our joining her in celebrating “I’m here!  I’m here!” – even as we recognise the tragedy of her human condition.

Though I think that some parts of Keene’s 70-minute script need tidying up to keep the drama moving along more clearly, this play is a brave piece of writing with a highly significant theme about the experience and treatment of motherhood. 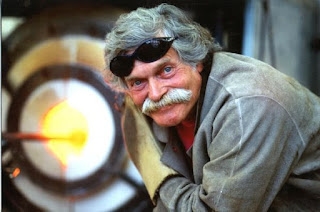 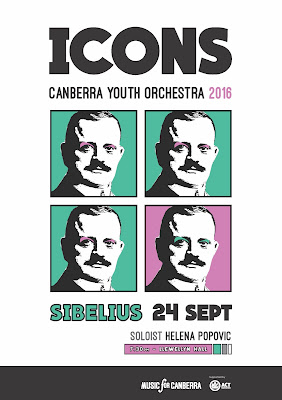