The Wharf Revue: Back To Bite You - Canberra Theatre Centre 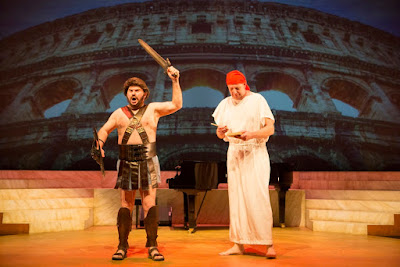 Last year's anniversary special Wharf Revue felt like a gap year, a break for the team while they waited for the chaos of Australian politics to settle down.  Famously, the day the show went to stage in Canberra Tony Abbott had his last day as Prime Minister, but the team still managed to address Malcolm Turnbull's rise to power in a short but well-polished sketch.  Now after a patient year of knife-sharpening the Revue's sketch writers celebrate Turnbull's first year with the savagery of unruly senators lining up to stick one more knife into Caesar.

This year the revue focused noticeably on extended scenarios, in particular the opening sketches set in Ancient Rome.  With Malcolm Caesar's leadership wobby there are whispers of a fatal leadership challenge - and for the Romans, a knife in the back is always literal.  These sketches were wry, boasting as many puns on Latin names as an Asterix comic, and gave the strangely appealing spectacle of Derryn Hinch kitted out as a gladiator.  The closing sequence cast an eye at the United States in an equally developed Little Shop of Horrors parody, that had naïve Republican power brokers feeding a Trump monster they cannot control.  I noticed that many of the lines (possibly all?) Trump was delivering in this sketch were actual quotes.

While the leadership rumblings in the Liberal Party were the main focus of the night, another key theme was the decline of the smaller parties, with the Democrats in particular the subject of brutal satire.  Pauline Hanson was the subject of equally sharp treatment, although Jackie Lambie was depicted with more dignity.  Bill Shorten's great moment was a speech-making lesson from Henry Higgins, while the Brexit was addressed in a sketch that recreated a Carry On Movie.

The Wharf Revue has never been known to shie away from a dad joke, but enough jokes land for the show to have an impact.  The satire is always just a shade gentle, ribbing rather true political anger, something all but the most hardened ideologues and party members can enjoy.  Although it was rewarding to look back, this year's Revue was anchored firmly in current events, and more satisfying for it.  By the time the show was finished it was hard to believe 90 minutes had passed, another success for the Revue in its spiritual (if not actual) home.
Posted by Canberra Critics Circle at 8:24 PM