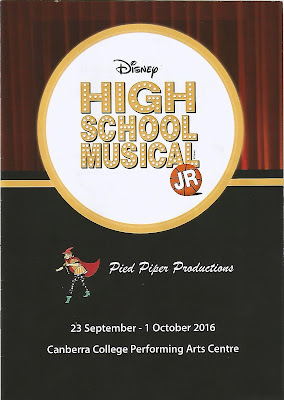 Departing from its usual programming of presenting imaginative productions children mainly in the 6 to 16 year-old age group, Pied Piper Productions are currently presenting “Disney High School Musical Jnr” in the Canberra College Performing Arts Centre. Surely the perfect venue for a musical about putting on a high school musical.

Presented without interval, and lasting just on an hour, “Disney High School Musical Jnr” is   a scaled down version of the original stage musical, but retains all the best songs and the essential storyline concerning two high school students from rival cliques.

Troy Bolton (Pip Carroll), captain of the basketball team and Gabriella Montez (Breanna Macey), a shy transfer student who excels in mathematics and science, decide to try out for the lead roles in their high school musical, and as a result, divide the school.

Their only rivals for the roles are Sharpay Evans (Sophie Hopkins) and her brother (Lachy Agett) who attempt to sabotage Troy and Gabriella’s audition. No prizes for guessing the outcome.
For this breezy production, the experienced hand of director, Nina Stevenson is evident in the uncluttered set design which allows the show to flow seamlessly. Colourful costumes and a succession of cleverly choreographed production numbers devised by Kathryn Jones, highlight the skill, enthusiasm and commitment of the large cast.

Pip Carroll and Breanna Macey give appealing performances in the lead roles as Troy and Gabriella. Both sing well, and bring unexpected warmth and charm to their characterisations.

Sophie Hopkins and Lachy Agett almost steal the show with hilarious performances as the conniving sibling rivals, Sharpay and Ryan Evans, who sing and dance up a storm while wearing a succession of look-at-me glitzy costumes.

In the supporting roles, Lachlan McGinness, Jacob Silvestrini, Annabel Foulds and Valeria Arciniega, each make strong impression portraying various friends and supporters, while in the two adult roles Janie Lawson has great fun practically chewing up the scenery as Ms Darbus, the ditzy director of the school’s unlikely musical “Juliet and Romeo”, and Brock Nicholson finds just the right combination of discipline and warmth as Coach Bolton the father of the hero, Troy Bolton.

Pied Piper Productions have come up with a winner with this bright and entertaining holiday show guaranteed to delight every member of the family but particularly the teenagers.

This review first published in the digital edition of  CITY NEWS  on 25.09.16
Posted by Canberra Critics Circle at 11:04 PM