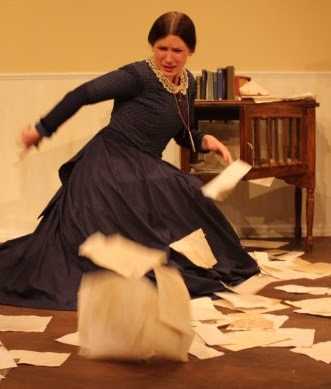 Charlotte Bronte may be a genius, but also she's a little gauche, a friend you care for but are sometimes a little embarrassed to be seen with.  Mel Dodge plays the author of Jane Eyre as an energetic and ebullient spinster, poking one tentative boot out into an English literary establishment that holds both her poverty and her womanhood against her.

The play is, according to deviser Mel Dodge, 75% in Charlotte Bronte's own words, and the voice in the new script feels consistent and authentic.  The script draws on Charlotte's novels, correspondence, and some surviving love letters to her married teacher Monsieur Heger.  Heger is depicted at the prototype for Jane Eyre's Rochester, Charlotte's ideal of the Byronic fantasy brute.

But perhaps because the play is mainly a collage of Charlotte's own writings, we only glimpse the surface of this flirtation: the play is limited by not only what survives, but what Charlotte was prepared to write down.  I expected a deeper exploration of sexuality in the household that gave birth not only to Rochester but Emily Bronte's Cathy and Heathcliff.  There is an understandable reluctance here to stray from the semi-hagiography in the biography by Charlotte's friend Elizabeth Gaskell.

Where the play is most interesting is its depiction of Charlotte as survivor, the eldest sibling who nonetheless buries her beloved younger brother and two literary siblings.  Emily Bronte is a fascinating character just from Charlotte's descriptions, and under the claustrophobic and isolating rule of their eccentric father the stories the girls tell each other become a vital escape.

When Charlotte discovers the possibility that a new tale by Emily still exists, it becomes the object of a frantic hunt, a search for the voice that had sustained Charlotte through many lonely years, and may be the only thing that can now salve the pain of loss.

Mel Dodge's performance is strong, emanating high energy from start to end, with Charlotte almost hectoring the audience with the stories she is compelled to tell.  Lyndee-Jane Rutherford's direction uses the space on stage well, something vital for a one-person-show, and the chaotic swirl of writing paper that sprawls across the stage perfectly captures Charlotte Bronte's fervid imagination.

Miss Bronte is unashamedly feminist, highlighting the painful private life of a born writer forced to hide her gender from the public to be read.  Ultimately it is also a story about the redemptive power of writing and words, how an isolated woman under the suffocating authority of a kooky father finds through storytelling a means to connect, to work, and finally to heal.