SHE STOOPS TO CONQUER 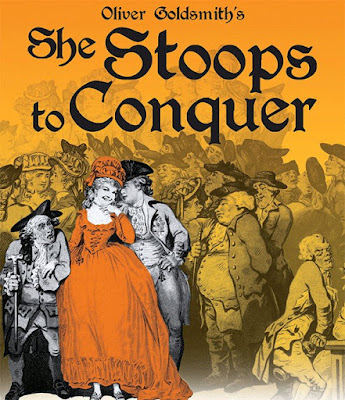 Here’s your chance to see an 18th century classic comedy brought to life wonderfully for a modern audience.  Tony Turner’s production for Canberra Rep is perfectly cast and satisfying and enjoyable in every way.

Through its many characters, the play presents an enthralling picture of 18th century English life.  A young woman finds a way to make her painfully shy suitor fall in love with her and propose while complicated and hilarious mayhem occurs around them.

The large cast perform the work with gusto.  The level of detail in the performances, physically and vocal, is quite remarkable.  Kate Hardcastle, the object of the betrothal, is nicely played by Zoe Priest as a confident, almost modern young woman with a sly sense of humour.  Her blustering parents, Mr and Mrs Hardcastle, are played delightfully with all stops out by Jonathan Pearson and Elaine Noon.

Kate Harris gives a winning performance as Mrs Hardcastle’s niece and Adam Salter almost steals the show at times with his hilarious portrayal of the scheming Tony Lumpkin.  The suitor, Young Marlow, is played by George Pulley, cleverly capturing the nervousness of the suitor around his intended and a brashness with others but keeping the audience on his side at all times.

Teig Sadhana gives a fine performance as George Hastings, Young Marlow’s companion with romantic plans of his own, and, in smaller roles, Anthony Ives as Sir Charles Marlow plays with a nice authority and Paul Jackson gives a funny characterisation as Stingo the Landlord.

Special mention must be made about the eight actors playing assorted servants.  The level of physical detail in their performances made them collectively into a major force in the show.  They are at times hysterically funny and always very real.

The deceptively simple and attractive set was designed by Cate Clelland and the beautiful costumes by Anna Senior with great period wigs by Ilona Murphy.  Lighting by Stephen Still and sound by Tim Sekuless added a fine atmosphere to the show.

Tony Turner’s direction is excellent.  You’re not aware of the length of the play as it moves at a fast pace even during the cleverly planned set changes.  Turner has achieved an amazing depth and reality in the characterisations of his actors.

This is one of those classic plays that you’re told you should see as part of your theatrical education.  I say go and see it because it’s just great fun!

Len Power’s reviews are also broadcast on Artsound FM 92.7’s ‘Artcetera’ program on Saturdays from 9.00am.
Posted by Canberra Critics Circle at 10:43 AM