Beware what you imagine. It might just become real. The dark, dark woods can be a dangerous place for a tiny, weeny mouse. If you can’t live by your strength, then you may have to survive by your wits, and that is just what Mouse (Kalyani Nagarajan) does by creating the big, bad monster Gruffalo (Josh Cramond). The wily fox, the ogling owl and the slithery snake ( all played with versatile vitality by Cole Jenkins) soon learn to their dismay that having the right friend can keep the predators away.


To Mouse’s surprise and to the wicked delight of the children in the audience, who have obviously read Julia Donaldson’s  story, the Gruffalo bursts into monstrous life, with an ominous taste for fried Mouse on a slice of bread.
In the face of such a perilous predicament, Mouse swiftly sizes up the situation and saves the day with a clever plan to scare the predators away, and discover the nuts that sets her on her quest through the dark and dangerous woods.
CDP’s production, remaining faithful as it does to the original Tall Stories Theatre Company production of this popular tale is a delectable theatrical treat for young and old alike. Isla Shaw’s colourful touring design of cut-out trees, unlike Axel Scheffler’s original illustrations, offers an Australian flavour to the setting, without losing the flavour of the story or its setting within the woods.  Minimalist and effectively lit by James Whiteside, the effective design allows the audience to focus on the characters, played with physical verve, an infectious sense of fun  and choreographed slickness by the talented acting trio. Costume designs remain true to the characters, while suggesting a fox, an owl and a snake without disguising them within a full blown costume, allowing the actors upon the stage to physically create the animals for the children. Only the Gruffalo’s more elaborate costume, created by Matthew Aberline stays truest to the storybook illustration. A sprucely attired fox, a winged owl with an aviator’s cap and goggles and a gold-clad, Caracas wielding  matador-dressed snake and a horned leafy costumed Gruffalo lift the story from the page into the vivid realm of a child’s imagination. It is here that the liberty of adaptation has been the preservation of the tale’s intent with added life and flair.  Olivia Jacobs' original direction has been faithfully and imaginatively re-directed for the Australian and New Zealand touring production by Liesel Badorrek.  Direction and performance show an expert talent for engaging a young audience, bewitching them with hilarious business, offering excitable possibilities to participate and throwing in the occasional in-joke to keep the adult members of the audience entertained.  At Mouse’s urging the wide-eyed attentive kids roar to the upraised arm and fall silent to the finger upon the lips. Crowd control has been skilfully martialled to let the story clearly unfold. It is a joy to see the careful consideration of theatre for young children taking its well-executed path. A less professional approach could easily lead to chaos, confusion and the loss of magic in a story that exalts the power of the imagination and the triumph of wit and wile over gullibility. 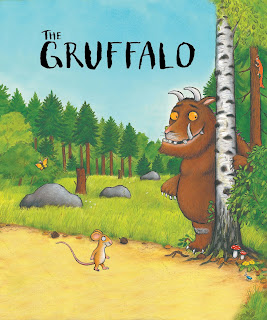 This production of The Gruffalo is delightfully enhanced by some catchy, lyrical tunes composed and written by Jon Fiber and Olivia Jacobs with additional music and lyrics by Robin Fisher and Andy Shaw. I found my foot involuntarily jigging to Mouse’s  Life is good in the Wood, Fox’s wily Let me be your guide, Owl’s How would you like to come up to my treetop house? and the slippery Rhumba rhythms of Snake’s Party Song. Even What does a Gruffalo do? lends a more wistful tone to the monster’s longing for more noble, heartfelt pursuits.
All in all this production has something for everyone. Adults may lend an amused groan to the puns as Gruffalo salivates at the thought of his favourite dishes Tiramouseoo, Mouseaka, and Bubble and Squeak while the young audience can squeal with feigned fright as Gruffalo runs through the theatre.   A carefully colourful and creative adaptation of Donaldson and Scheffler’s Gruffalo fills the young audience with delight in a fifty minute performance, jam-packed with entertainment and the unobtrusive moral to the tale. For holiday entertainment for the kids aged 4 and upwards, The Gruffalo is a sure fire hit.


AN original version of this review was published on Canberra Critics Circle in September 2014 after a performance at the Canberra Theatre Centre. Much of the content of that review is included here and reflects the ongoing quality and enduring popularity of this production by CDP Productions. Changes have been made to reflect the different cast and the different performance venue. Otherwise this review is almost identical to the previous review of the Gruffalo that I wrote in 2014.
Posted by Canberra Critics Circle at 9:39 PM