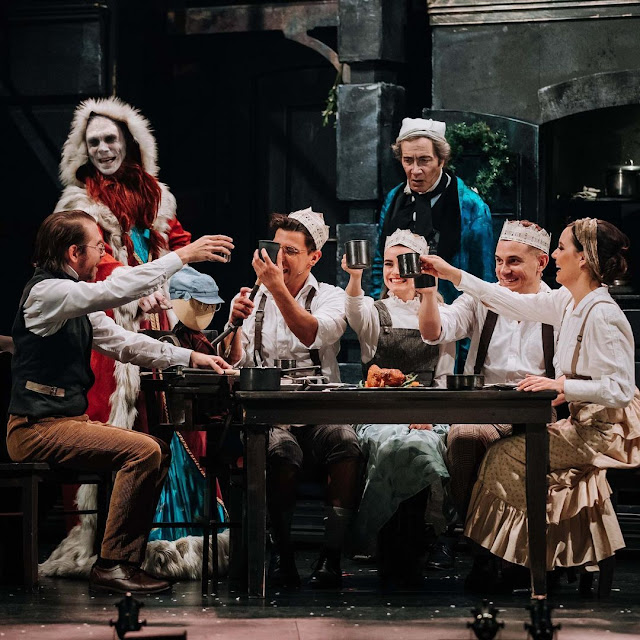 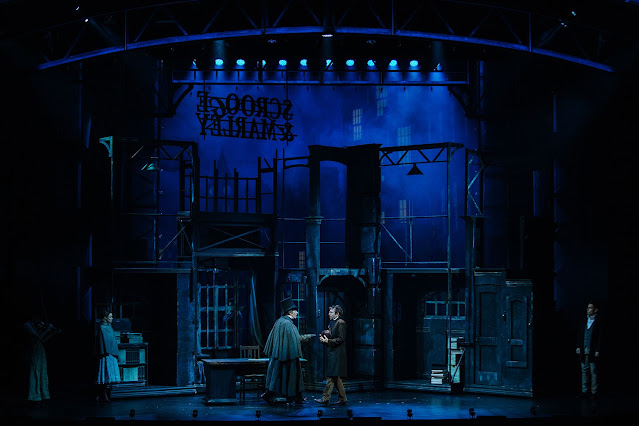 This spectacular production of “A Christmas Carol” was premiered in Brisbane in 2018, and since then has become something of an annual favourite with Brisbane audiences, where it’s been seen by over 100,000 people. Now having its first Canberra showing, it’s not difficult to see the attraction.

Adapted by Nelle Lee, and directed by Michael Futcher, this version of “A Christmas Carol” offers a particularly optimistic version of the Charles Dickens classic.

Josh McIntosh has designed a towering architectural setting, which with the help of the cast, sweeps around the stage, constantly transforming into Christmas card images of Victorian London, as it propels the storyline through the many scenes.

Swirling fog, fluttering snowflakes, Christmas trees, holly wreaths, Christmas turkey, Christmas pudding, and of course carol singers, are all there. Atmospheric projections and even holographic three-dimensional ghosts, dazzle the eyes, while the apparently huge cast engage the intellect enacting the familiar story of how the miserly Ebenezer Scrooge finally discovers the joy of Christmas.  It comes as quite a shock at the end of the show, when the actors take their bow, to realise that there are only ten of them.

As the miserly Ebenezer Scrooge, Eugene Gilfedder gives masterly a performance of Shakespearean proportions. At times funny, serious, terrified or imperious, he dashes up and  down revolving staircases, dodges visions that disintegrate before his eyes, then finally and convincingly converts into a kindly and generous employer.

Musician Tabea Sitte is a constant and effective presence throughout as she wanders through scenes providing live accompaniment for the carollers and haunting atmospheric background music elsewhere.

Although sound balance issues at this performance meant that much of the dialogue was unintelligible, only a Gringe could leave the theatre without being enchanted by the ingenious performances and magical effects on display in this masterly production.

This review first published in the digital edition of CITY NEWS on 22.12.22


THIS rich version of A Christmas Carol has all the theatrical enchantment needed for a pre-festive season show.

The actors are very much a low key ensemble but this is really a good way for Charles Dickens’  great morality tale to work its way into the consciousness.  And the grandeur of its visuals, combining 19th Century imagery with 21st Century technology sweeps the audience into this dark tale of a miser and his transformation.

It starts with faint low key carols at the back of the stage and pours in the music throughout, from voices and from Tabia Sitte as a sweet sounding, roving and very occasionally commentating violinist.

Then comes the set up; Scrooge’s dismal office and his dismally mean nature and his much put upon clerk Bob Cratchit and Scrooge’s unfeeling behaviour to a couple of his debtors.

Old partner Joseph Marley is the dramatic challenge to scrooge’s ingrained meanness, followed swiftly by three ghosts, that of Christmas Past, Christmas Present and

Christmas Future. (All of which seem to be played with great versatility by Bryan Probets. I say ‘seems’ because the identity of the last silent spectre is heavily disguised.)

Scrooge sees the past that made him what he has become and the future consequences that will strike unless he changes his ways. And what will become of the Cratchit’s frail son Tiny Tim (an evocative use here of puppetry and transformation) if he does not?

Most of us know this territory but what Shake and Stir do with it is masterly in mood and theatricality. Eugene Gilfedder’s deeply flawed and grouchy Scrooge is at the centre of a visually lush evocation of c 19 London. The scenery towers combine and recombine against projected and atmospheric images of town, of woods, of graveyard, of supernatural travelling and of the spirit realm.

Lost love, singing, bright faces, Christmas reconciliation, an improbably huge turkey and above all, snow;  this show has got it all.

There’s no interval but there was a strong sense that for nearly two hours the audience, of all ages, had not really drawn breath. Then the well deserved applause broke out. Well done Shake and Stir and well done Canberra Theatre for giving a seasonal home to such a powerful production.

A Christmas Carol by Charles Dickens. 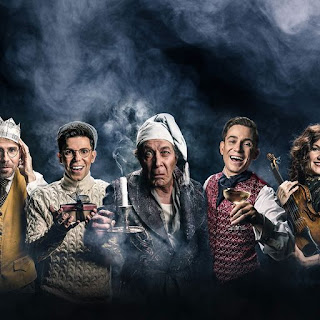 shake&stir eheatre have staged A Christmas Carol that would melt the iciest heart. Charles Dickens’ classic tale of hope, redemption and the joy of Christmas has been given a superbly uplifting production of the immortal story of miserly Ebenezer Scrooge’s transformation. In fact transformation is at the very heart and soul of Shake&Stir’s production. It is Josh Macintosh’s fluid design that is moved by the cast from the Gothic streetscape of Victorian London to Scrooge’s austere office or the Cratchit household and eventually to the cemetery before returning to the abode of an enlightened and reformed Scrooge. The eight actors too perform a remarkable act of transformation as they change from carol singers to a chorus, carrying us along through Nelle Lee’s concise and absorbing adaptation. And then they change from one character to another, capturing people from the past, the present and the future. Only Eugene Gilfedder as Scrooge remains in the role throughout, effectively charting the journey from intransigent curmudgeonly miser to liberated and compassionate altruist. 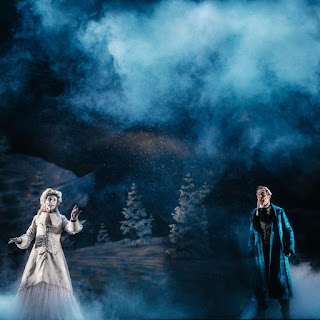 More than that shake & stir are true disciples of Dickens’ reformist ideals. Nowhere is this more pronounced than in the Cratchit scenes, where Scrooge is confronted by the true nature of humanity and the oppressive reality of his suppressed nature. In the first Cratchit scene we see a family, bound together by love and laughter. In the second scene we weep too at the imagined death of Tiny Tim, ingeniously represented by Chris Lane’s puppet in this production, in a transformative moment that is Dickens’ cry for social justice and Scrooge’s bitter awakening. It is Shake & Stir’s Christmas gift to do more than lift our spirits with laughter and theatrical delight but almost two hundred years after A Christmas Carol was published to remind us that Dickens’ advocacy for reform and social justice for the poor and the disadvantaged remains the true purpose of the Christmas spirit of the past, present and future yet to come. 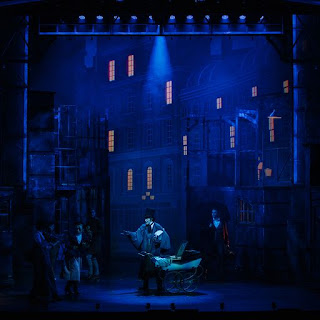 Lee’s adaptation runs for one hundred and five minutes without an interval. It is carefully and evocatively selective highlighting key scenes with a sharply observed appreciation of Dickens’ themes. We instantly dislike the uncharitable Scrooge in the opening scen as he bullies his clerk  Bob Cratchit (Lucas Stibbard) and dismisses any appeal for kindness. Bryan Probets cleverly captures the idiosyncratic aspects of the visitations from the tormented and chained Jacob Marley, the eccentric Ghost of Christmas Past, the joking Christmas Present and the sombre and mysterious cloaked and silent figure of the Ghost of Christmas Future. Accompanied by amazing video design by Craig Wilkinson, sound design by Guy Webster,  lighting design by Jason Glenwright and composition by Salliana Campbell, the production is an aural and visual wonder, thrusting our involvement into a digital age of mind-blowing and magical imagery and sensations. Actors and creatives under the captivating direction of Michael Futcher embellish Lee’s adaptation with technological wizardry and fine ensemble work, which kept the audience, both young and young at heart spellbound from start to finish. 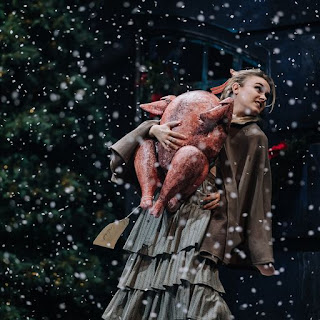 In their earlier mainstage production of Jane Eyre in The Playhouse and now with their even more ambitious staging of A Christmas Carol on the Canberra Theatre stage, shake & stir have proven that they are a company of national and theatrical stature and that their work holds an important place in the staging of classics literary works while also touring schools with contemporary productions of Roald Dahl’s The Twits or The Fantastic Mr. Fox. As the snow falls on a glorious Christmas day in 1843, the small ensemble accompanied by Tabea Sitte on violin sing the closing carol of Joy to the World to the absolute joy of a cheering audience.

The perfect show for the Christmas season, ‘A Christmas Carol’ has it all – a good, classic story, fine acting and breath-taking, elaborate staging.

Ebenezer Scrooge, in his quest for wealth, has lost the spirit of Christmas, becoming an embittered, lonely recluse.  One evening, close to Christmas, the ghost of his deceased former partner, Jacob Marley, appears before him in chains and warns him he is likely to suffer the same fate when he dies.  One by one, the ghosts of Christmas Past, Christmas Present and Christmas Yet To Come make him see the error of his ways and rejoin the human race in celebrating Christmas.

Charles Dickens wrote the novella, ‘A Christmas Carol’, in 1843 after reading a parliamentary report on child labourers which particularly moved him.  He, himself, had been a child labourer and he drew on that experience as well as those of his disabled nephew, the desperate struggles of the poor people at the time and the renewed Victorian interest in Christmas.  The story has remained popular ever since and various movies and theatre productions have retold the story in their own way.

Shake & Stir Theatre Co.’s production uses all the technical wizardry of the modern theatre to tell this story.  The supernatural element of ghostly apparitions and story flashbacks make this a difficult story to present convincingly but the company succeeds marvellously.


There are eight actors and one musician in this production.  Eugene Gilfedder plays Scrooge very effectively and the rest of this expert company play multiple roles, breathing life into all of the elaborate Dickens’ characterizations.  Tabea Sitte is a violinist who provides the appealing musical accompaniment to the action.  The composer is Salliana Campbell.
The amazing production is designed by Josh McIntosh.  Sooty, dark, tall buildings loom out of the London night and back projections complete the picture of Victorian England.  The presentation of the ghostly spectres is extremely well-done with an exciting mixture of old and new technology.  The lighting, designed by Jason Glenwright, and the sound, designed by Guy Webster and Chris Perren, are an important part of the production, adding great atmosphere generally and some real shivers when the ghosts appear.

A great family show, ‘A Christmas Carol’ is true to Dickens’ source novella and is magically and memorably told.

Posted by Canberra Critics Circle at 9:40 AM