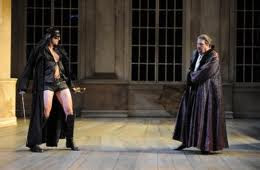 Opera Australia has revived Goran Jarvefelt’s splendid 1991 production of "Don Giovanni" for this outing at the Sydney Opera House, and they have done it proud. Rehearsed by Mathew Barclay, and played out on Carl Friedrich Oberle’s uncluttered classic setting, this production is wonderfully detailed and superbly performed.

Though his performance as Don Giovanni is already the stuff of legends, it has been, surprisingly, almost five years since Teddy Tahu Rhodes last performed it for Opera Australia. In that time he has had many other operatic triumphs, but his first act entrance, clad in a brief pair of leather shorts, thigh high boots, a cloak, and little else, still draws gasps from the audience. But leaving his spectacular entrance aside, it is now Teddy Tahu Rhodes voice and presence in this role that is so memorable. His voice is now even more sonorous, warm and compelling, and physically he is every bit the licentious young nobleman of the program’s description – lean, handsome and muscular.

It’s not difficult to see why all the women in the opera fall helplessly under his prey, although his treatment of each of them is unforgivable. Despite his aggression and the easy way he murders, rapes and employs violence, the audience remain on his side. That is,perhaps, until the final act depicting the Don in the final throes of depravity, slopping wine all over his unfortunate associates until, finally, he is plunged into Hell by the unforgiving ghost of the Commendatore, chillingly portrayed by Daniel Sumegi.

Yet, despite his brilliance, it is not Teddy Tahu Rhodes performance alone which makes this production so satisfying and memorable. Each role has been carefully and perfectly cast, with each character not only singing brilliantly and looking the part, but bringing with them a clear understanding of the motivations which drives their particular character.

Tall and elegant, Rachel Durkin is arresting as Donna Anna whose father, the Commendatore, Don Giovanni kills without hesitation. Her singing is as clear and precise as her acting. The warmer voiced Jacqueline Dark is a charming contrast with her lovelorn Donna Elvira, unable to cope with the realisation that she has been abandoned by Don Giovanni. As Zerlina, the about-to-be-married peasant girl, Taryn Fiebig is dazzling in another intelligently acted and vocally arresting performance cementing her position as one of Opera Australia’s most versatile, popular and accomplished sopranos.

The male casting in this production is also particularly strong. In addition to Teddy Tahu Rhodes and Daniel Sumegi, both Henry Choo and Andrew Jones add lustre as Don Ottavio and Masetto, and Conal Coad brings dignity, warmth and a very fine voice to his impeccable interpretation to the Don’s long-suffering manservant, Leporello.

Mark Wigglesworth again demonstrate that his superb conducting of the Australian Opera and Ballet Orchestra for “Peter Grimes” was no one-off, because the dramatic impact and excellent balance achieved between singer and orchestra during the performance added the icing to the cake of this truly thrilling and memorable production. 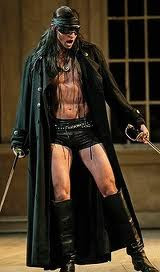