Though best known as a composer for films, Erich Korngold also wrote several operas. However "Die tote Stadt" is the only one still being produced by opera companies. Because of the huge resources required to stage this opera, and the demands it makes on its singers, productions of "Die tote Stadt" are rare.

Opera Australia's production is therefore something of an event, made even more so by the fact that the direction of this production has been entrusted to one of Australia's most acclaimed film directors, Bruce Beresford.

"Die tate Stadt" requires an 88 piece orchestra to do justice to Korngold's soaring vocal writing and lush orchestrations. The lead male role of Paul requires a heldentenor and there are only three such tenors in the world currently singing this role. German tenor Stefan Vinke is one of those and was available for this production. At the second performance, Vinke appeared to be experiencing some vocal difficulties in the first act, but quickly overcame the problem and in the second and third acts impressed with his strong and superbly projected vocal range which rose thrillingly above the huge orchestra.

The lead female role is a dual one, and the singer cast in this role has to portray Paul's dead wife, Marie, and Mariette, a dancer with an uncanny resemblance to Marie. So, in addition to being up to the demanding vocal requirements of the two characters, must also have dancing skills. Cheryl Barker was the perfect choice, especially in her portrayal of Mariette, beautiful, coquettish and worldly-wise, she was totally convincing. She also danced gracefully and even during the dramatic events of the third act her voice retained its customary warmth and lustre.


"Die tote Stadt" revolves around the obsessive love of Paul for his dead wife, Marie. Paul has turned his house into a shrine for Marie, the centrepiece being a glass case containing a plait of her her. When he meets a dancer, Mariette, who resembles his dead wife, he attempts to transfer his love on to her.

Though attracted to Paul, Mariette rejects his attempts to turn her into a copy of Marie, resulting in a nightmarishly surreal series of events in which Paul kills his best friend, Frank ( a fine performance by Michael Honeyman)  after Frank confesses to also having an affair with Mariette, then finally, in a fit of rage, strangles Mariette with the plait of his dead wife's hair. Events which however prove to be a terrible nightmare.


Bruce Beresford, along with designer, John Stoddart, lighting designer, Nigel Levings and sound designer, Tony David Gray, has come up with a remarkable concept for the staging of this opera which involves moving the huge orchestra right out of the theatre for the performance and re-locating it in the nearby drama theatre. The sound from the orchestra is then broadcast into the theatre as the singers perform onstage, unamphlified.

Amazingly, this works extremely well. The lush sound of the orchestra was beautifully produced and an excellent balance was achieved between the singers and the orchestra so that the singers voices  were were not overwhelmed . The result was very much listening to a favourite stereo CD.

The strength of Bruce Beresford's direction is most evident in how he deals with the surrealism of the events and his use of filmed images projected on to scrims works particularly well in the second and third acts. Although it must be said that while the vision of the shower of red roses in the second act was quite beautiful, watching those same roses reverse and shower skywards later in the act provided a head scratching moment. 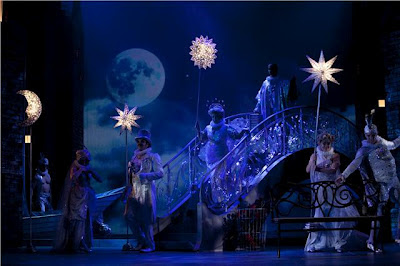 Stoddart's designs are at their most beautiful in Act two, when the strolling troupe arrive at Mariette's house. Enhanced by Levings exotic lighting design and Timothy Gordon's graceful choreography the mood of sensuous decadence provides the perfect setting for one of the vocal highlights of the evening ...Jose Carbo's stunning performance of "Pierrot's Lied".

While overall, it was all very surreal and beautiful, there were time when the effect was reminiscent of watching a filmed opera, rather than experiencing it live. So as a portent of things to come, this is slightly worrying because perhaps future audiences may choose to listen to their favourite opera CD, or watch a DVD of their favourite opera rather than attend a live performance. But for the present, one can only be grateful that Opera Australia has provided the opportunity to enjoy such a handsome staging of this beautiful and rarely seen opera.