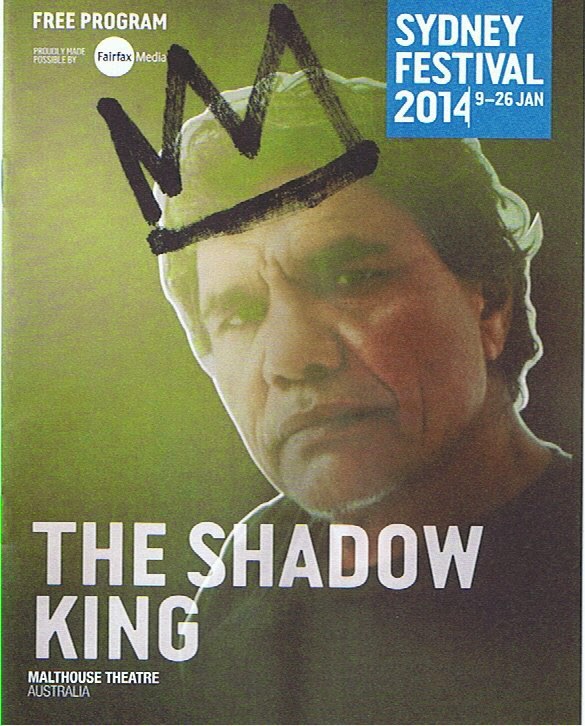 The Shadow King is simply extraordinary.  For the second time in the Sydney Festival I have been brought to tears.  And like Black Diggers, it’s a close collaboration between the European and Aboriginal cultures.  Where Shakespeare made the legend of King Lear into an English drama, Murrungun man Tom Lewis and European Michael Kantor have made the story deeply Australian.  They have shown how the universal issues of King Lear – the ruination of the land on which we all depend, through family demands, jealousies, greed and spite – are the same in our fractured country, with terrible consequences in Aboriginal experience.

I have seen several King Lears from the Genesian Theatre, Sydney in 1967 to Bell Shakespeare in 2010, but never one to match The Shadow King for emotional effect.  This was because there was more to the tragedy than Lear’s personal folly and realisation too late to save Cordelia.  Edmund’s evil, for one thing, turned him into a policeman acting against his own people, as had happened notoriously in Queensland.  Goneril had her children taken away – by Cordelia when she returned from banishment.  Edmund was sexually violent to Regan, at the point where she began to regret her stand against her father.  Gloucester became a mother – of Edgar and Edmund – of great moral standing and strength, but still blinded by the forces unleashed in her children.  The Fool, who dies mysteriously in Shakespeare’s play, returns to complete his role as the spirit narrator who puts the story into its Aboriginal context.

It’s in this extra dimension, with all the implications and references to Indigenous history on country, that brings the emotions of great sadness welling up.

And, to conclude, the characterisations by the actors, speaking their own Kriol, or Yolnu Matha as well as Shakespeare’s English are finely drawn with simple clarity.  Tom E Lewis is a remarkable Lear, a leader among equals in Jada Alberts, Jimi Bana, Frances Djulibing, Rarriwuy Hick, Damion Hunter, Kamahi Djordon King, and Natasha Wanganeen, thoroughly supported by the band Selwyn Burns, Djakapurra Munyarryun and Bart Willoughby, and the film makers Natasha Gadd, Rhys Graham and Murray Lui.

They all deserved the standing ovation they received on their last night in Sydney – a fitting celebration of Australia Day.