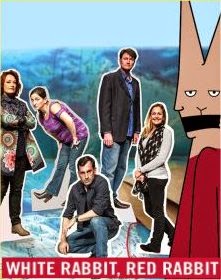 Written by Nassim Soleimanpour
Performed by Geraldine Turner (different performers at each show)
The Street Theatre 28 May – 1 June, 2014

It’s always good to see something a bit different from the norm in theatre.  Iranian writer, Nassim Soleimanpour’s ‘White Rabbit, Red Rabbit’ is advertised as “No rehearsals, no director, no set.  An unnerving comedy of human freedom that defies national boundaries, censorship…and description.”

A performer with no knowledge of the show takes on the challenge of a cold reading of a script handed to them only when they walk onstage.  Different performers appear on different nights.  On opening night, highly experienced actress Geraldine Turner showed that she was game for anything this script might throw at her.  The audience was also asked to keep their phones switched on during the performance, which was highly unusual, but there was a reason.  If the audience then thought they could sit back and just enjoy Miss Turner’s probable discomfort, they were quickly mistaken.  Given an individual number in relation to where they were seated, certain audience members were then selected by numbers stated in the script to take part in various sequences that were quite challenging for non-performers.  Those of us not selected in the first group were soon feeling distinctly nervous.

It’s important that both performer and audience don’t know the content of the show before they see it, so I can’t spoil it by revealing its secrets.  It’s fair to say that the writer’s intent is to touch on issues about differences in human rights internationally, how easy it is to react like animals rather than human beings and, at the same time, examine play writing from both the writer’s, performer’s and audiences’ point of view.

My immediate reaction at the end of the play was that I enjoyed it.  Geraldine Turner was an excellent performer to take the journey with.  Doing a cold reading of a script would be hard enough, but ensuring the audience was entertained as well was a lot to ask of any performer.  She kept the audience on side with a twinkling sense of humour and made us feel we were sharing her experience quite intimately.  It was also fun to see hapless audience members taking on challenges they were not expecting and enjoying that delicious feeling of ‘I’m glad it wasn’t me’.  The participating audience members actually did rather well.

However, thinking about it afterwards, there wasn’t really much depth in the writing.  Various issues were raised but it was all rather basic and nothing you didn’t know already.  The surface dramatics were much more interesting and enjoyable but swamped any serious intent by the writer.  However, it would be fun to see where other performers and audiences take the show.

If you like to see something rather different, you can have a good time at this show.  The only confronting aspect you’ll experience is having your number called and finding yourself part of the performance.