BEST FESTIVAL EVER - HOW TO MANAGE A DISASTER

BEST FESTIVAL EVER - HOW TO MANAGE A DISASTER

I have been an avid supporter of the work of Boho Interactive Theatre since I first viewed their production of A Prisoner’s Dilemma at an Adelaide Fringe Festival. I was intrigued by their unique ability to combine science principles with theatre conventions and introduce audiences to the fascinating phenomenon of Game Theory, using interactive techniques, which have become the trademark of this innovative and thought provoking company. Over the years, their techniques have become far more sophisticated, resulting in video-streaming and interactive smart phone participation in Word Play at the CSIRO.


More recently, they have returned to a more traditional approach with their latest collaboration with Applespiel from Sydney to present Best Festival Ever – How to Manage a Disaster, which explores the science of complex systems management.  Traditional that is in the fact that the event is presented as a fun-filled and absolutely engaging board game at which audience are encouraged to manage all aspects of creating a music festival upon an unspoiled rural landscape of green grass divided by a gently flowing river. Their approach to describing how a system works is far from traditional however. It is innovative, entertaining and illuminating, and at the end of the evening the education is furthered by a conversation with an eminent scientist.


Boho’s interactive concept to describe system management is orchestrated by the three facilitator/performers from Applespiel. Nikki Kennedy, Rachel Roberts and Nathan Harrison introduce the audience of about thirty, gathered around the long table, to the task of converting the landscape to a music festival venue, occupied by the various sub-systems of access, amenities, electricity and the concert/performance.  What follows is a carefully directed process to show how the various systems that interconnect are essential to the success of an effective festival. A thin plotline leads the audience through the experiences of three characters, Val, the production manager, Eliot an enthusiastic festival goer and Liz, an aspiring musician, eager to avoid her father’s with to have her enter military service and pursue her passion by playing with lead feature, Powderfinger.  Each character becomes embroiled in a series of problems that can only be solved by the audience. They need to build the various parts of the festival, including toilets, food outlets, stages and service roads. Applespiel facilitators then set time limits to construct the various parts of the venue, deliver resources, create access points, transport the power and decide on locations etc.


The table erupts into a babble of excitement, climaxing in the threat of an impending flooding and the subsequent mayhem to ensure the security of the venue and the safety of the festival goers. Incorrect choices could result in a breakdown of the subsystems and indeed the entire system. For correct choices the participants in the game receive audience friendly figures. For incorrect choices, they are given a garbage bag, with the instruction that they must not exceed four garbage bags or the beautiful landscape will be permanently damaged.


Needless to say all ends happily. The farmer’s sheep are rescued. Val has saved the festival. Eliot has a great time and is not run down by a truck on the service road and the Powderfinger concert goes ahead on the mainstage with Liz as a support artist. However, we are reminded of the fragility of complex systems, their interrelationship and the importance of preserving equilibrium and inter-reliance


After the excitement has died down, and the damage is restored to its former glory, audiences are invited to have a drink from the bar and return to listen to a scientist who has also participated in the game. John Finnegan from the CSIRO described the nature of systems with particular emphasis on the effect of natural systems on climate change, leaving no doubt in my mind that this is a major concern to be faced by world governments with a prospect of real damage to the environment and humanity if action to prevent the damaging effect of carbon emissions is not implemented immediately. 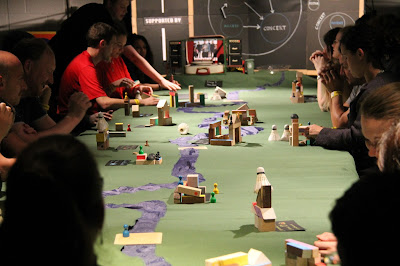 I am no scientist, nor did I ever achieve good results in my relatively limited science education. And yet, each time I attend a Boho Interactive event, created by members of the team, David Finnegan and David Shaw at Best Festival Ever – How to Manage a Disaster, I discover the intricacies of science through the lifting of a veil of mystery by this remarkable interactive company. Their latest production is a revelation of the simple truths of complex principles, and although I remain rather nonplussed by scientific theory and concepts, a light has been shone upon my limited knowledge in a way that is entertaining, fun, thought-provoking and illuminating. Theatre in Education and Science fuse into an ingeniously created, audience-accessible and awareness-raising event that provides an insight into the way our world works and our responsibility to preserve its balance.


The creative force of Boho Interactive in collaboration with Applespiel should be a regular feature in every science classroom.  This is what makes learning fun!