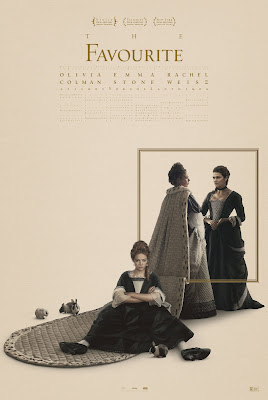 A power struggle at the top. Deadly serious for those involved but for observers from afar, it’s a spectacle that can have all the makings of comedy.

So it is with The Favourite, where two women vie for favour at the court of Queen Anne in England three centuries ago. In the hands of Greek director Yorgos Lanthimos, a rollicking and irreverent take on the historical drama, that veers deliciously towards the absurd. It’s a load of outrageous fun, and one of the best satires of the ruling class since Peter O’Toole had the House of Lords in his sights.
Lanthimos, a director with a gift for the cryptic, makes distinctive dramas that offer a variety of meaning. More’s the fun of it.

His film from 2009, Dogtooth, was a sinister take on family in Greek society, while his first English language film, Lobster, took aim at the tyranny of social conformity, among other things. Not that successfully, in my view.

Lanthimos often writes as well as directs, when he isn’t working on plays, music videos or the television commercials that probably help him keep his touch light.

Although he didn’t write the screenplay this time, Lanthimos is at one with the spirit his writers, Deborah Davis and Tony McNamara, bring to it. They have turned the carefully curated British period drama on its head with this jaunty, juicy farce. The historical authenticity of locations and costumes for the period is impressive. As if the tall wigs and rouged courtiers weren’t preposterous enough, Lanthimos and his DOP play with camera angles and fish eye lens to even more bizarre effect.

The ailing and isolated queen, Anne, played brilliantly by Olivia Colman, despairs that she has not been able to perpetuate the Stuart line with an heir. The 17 pet rabbits she keeps in cages in her bedchamber bring some consolation for the multiple still births, miscarriages and young lives lost.

Her close confidante is the Duchess of Marlborough, Sarah Churchill (Rachel Weisz), whose husband is often away keeping the neighbours under control. On this occasion he is fighting the French, and Sarah is pressing for the campaign to get better funding. A prominent Tory, the Earl of Oxford (Nicholas Hoult) is opposed to increasing tax to make this happen, and doing his best to undo the campaign of persuasion that the duchess conducts in the queen’s private quarters, and in her bed.

The upstart Abigail Hill (Emma Stone), stumbles into this fevered mix. As a relative of Sarah’s, she had hopes for some favours but she is swiftly relegated to the scullery. Unfortunately for Sarah, cousin Abigail makes a saucy wench when she gets half a chance. It is a fatal mistake. The Queen appoints Abigail to keeper of the privy purse and takes her to her bed.

This may or may not be true, but as a study in the struggle for power and influence it is witty and entertaining. Although it’s the men like the Earl who hold power in parliament and at court, it’s the women who explore the ways and means to exert influence. In terms of gender roles, not so flattering, but it could just as easily be told the other way round because it would be difficult to contest the underlying truth. A witty expose on the lot of us.

Jane's reviews are also published at her blog, the Film Critics Circle of Australia, and broadcast on ArtSound FM 92.7
Posted by Canberra Critics Circle at 11:26 AM