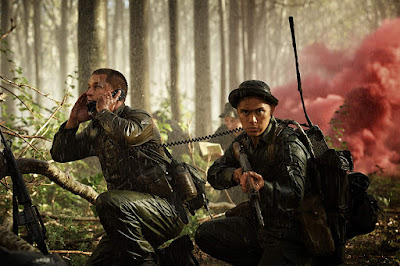 In 1966, Long Tan was just an abandoned village inside a rubber plantation not far from Saigon, today’s Ho Chi Minh City, in southern Vietnam. After 18 August that year, when Australian and New Zealand solders encountered Viet Cong and North Vietnamese troops there, it became the scene of a pitched, three-and-a-half hour battle. There were many losses all round and both sides claimed victory at the time.

difficult and contested territory, the legacy for the US and its allies

An irony if ever there was one. No one really seems to ‘win’ in war. Though by 1975, the Vietnamese could at least claim their independence after centuries of wars during which they eventually saw off the Chinese, the French, and the Americans and their allies.

Any film about the Vietnam War enters the difficult and contested territory that is the legacy for the US and its allies. The American film industry is probably still recovering from the impact that the experience had on the national psyche.

The latest film from Kriv Stenders (who directed the beloved Red Dog), along with his team of writers including Stuart Beattie (Collateral, Tomorrow When the War Began) is a brave contribution that pretty well confines itself to events from the Australian perspective and avoids making judgements about our involvement.

It is great to see a local film exploring a difficult period of Australian history.

Until the battle of Long Tan, as I understand it, conscripts could comprise a staggering 50 percent of troops on the frontline. It's clear that Stenders wishes to honour the losses and the bravery of the men at Long Tan. They were recognised by the US and South Vietnam, but for many years elided by their home country.

Conscripts like Private Paul Large (Daniel Webber), from somewhere beyond the black stump in northern NSW, who died that day aged 21. And he was one of the oldest. The youngest casualty among the 18 who died was only 19, like the voice in the Redgum song that has become an unofficial anthem for veterans.


it wouldn't have been won without a level of disobedience

A battle was not anticipated when, after an attack on the newly established base at Nui Dat, Brigadier David Jackson (Richard Roxborough), sent soldiers out to reconnoitre where the mortars were coming from. A platoon of the men were caught in a pincer of VC troops, and cut off from them the rest of the company.

Seasoned officer Major Harry Smith (Travis Fimmel) and his inexperienced men were trapped and sure to die, but back at headquarters in the base, command feared that sending in reinforcements would expose the base itself to attack. The artillery saved the day.

As this new film tells it, Long Tan was not the most glorious moment for Australian high command, suggesting it wouldn’t have been ‘won’ by the ANZACs without a level of disobedience. Orders are brushed aside at several key points, when men take action, risking their lives to support others in the field.

All this occurred on a day when singers Col Joye (Geoffrey Winter) and Little Pattie (Emmy Dougall) had been flown in to entertain the troops.  It is a bizarre interpellation of the look and feel of life back home, when it was a matter of life and death on the front.

If you take yourself along to this film—very well staged and nerve-jangling after a slightly awkward start—you may find yourself recalling Peter Weir’s ageless Gallipoli set in World War I, or aspects of Francis Ford Coppola’s take on Vietnam in his masterpiece Apocalypse Now.

Danger Close: the Battle of Long Tan, just like any good so-called ‘war’ film, has a message that is powerfully anti-war, highlighting the terrible human cost.

Jane's reviews are published at her blog, the Film Critics Circle of Australia, and broadcast on ArtSound FM 92.7 MHz
Posted by Canberra Critics Circle at 11:30 AM