NEO-Learning is a First Nations education program for primary schools, devised by the Ieramugadu children and guided by their elders as a continuing gift to all Australians.

Big hART was first invited to work in Ieramugadu (Roebourne) 10 years ago by senior women Elders, who wanted Big hART to deliver projects which highlight heritage as living, continually evolving in the here and now. It was thereby vital that NEO-Learning celebrated living continuous culture, and was co-created by young people from Roebourne and guided by Elders and senior members of the community.

As Elder Michelle explained at the launch, “How do you bring stories about your life?  We’re in control of our story in NEO-Learning,” going on to show how the children in the schools using the platform are “not just consumers” – because they are actively engaged – and that learning online in this way is a “new literacy” for her children, as well as for everyone else.

Most important, from the Yindjibarndi perspective, is how NEO-Learning works “to maintain our culture” from the old into the new.  “We are the teachers now,” said one of the Roebourne students, while their Elders talked of the importance of their young people taking on their role as creatives and innovators in their culture, and so being engaged and committed to their community.

The Yindjibarndi people are one of the five clans who had to take over the responsibility to care for the land known as Murujuga or Burrup Peninsula, after the ancient traditional custodians – the Yaburara – were massacred in 1869.  The area, with literally tens of thousands of rock art drawings, has been extensively damaged mainly by the LNG gas and chemicals industry which should never have been allowed to operate there.

The Ngarluma community has taken on the task of managing as best they can what is now the Murujuga National Park, in the face of Woodside attempting to expand their operatons.  When I spoke to a Ngarluma Elder, in 2018, his central concern was that the rock art, which scientific studies show dates back to at least 35,000 years ago and was still being actively worked until the massacre, is essential in the education of young people today, so that they understand and respect their culture, and are committed to their community.

Despite the WA Government doing its part in requesting Murujuga be nominated for World Heritage (which requires the Federal Department of Environment to prepare for the Minister to put the nomination, representing Australia, to UNESCO), Woodside may yet be given what I would call a red light to go ahead with their proposed expansion. 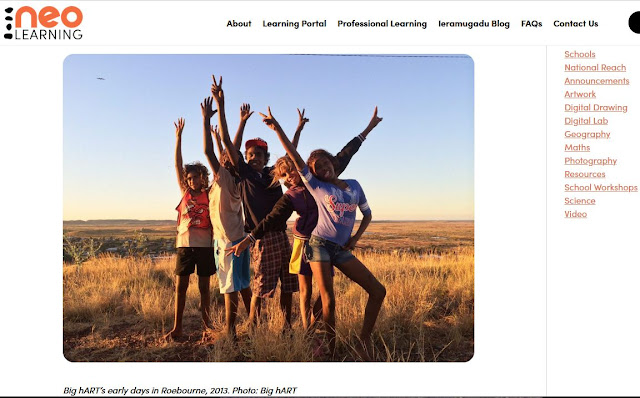 Watching the launch of NEO-Learning, two points important for education became clear.  First is how the engagement of the teachers and their students works.  Second is the arts education principle, which underpins the process.

This is where an appreciation of Big hART comes in.  I have previously written of Scott Rankin’s work, on this blog: Cultural Justice and the Right to Thrive by Scott Rankin.  Platform Paper No 57, November 2018 (Currency House, Sydney).

Speaking at the launch he made his philosophy clear, in simple terms: “It’s harder to hurt someone if you know their story.”  Big hART people are “servants of society”, operating not as a generalised charity, but as facilitators of specific projects through the arts.  “We are the privileged ones,” he says, because of what the Yindjibarndi people are doing for us.

The students come and go according to their hospital treatment requirements, and what they are capable of doing from day to day is unpredictable.  The NEO-Learning program consists, for a start, of videos made in Roebourne with such enthusiasm and sense of fun, that even hospital inmates who can’t get up and dance are thoroughly enthused about their own futures.  And for teachers in more stable circumstances, it is through the arts activities, perhaps especially in dance, painting and music which the videos generate, that real understanding of First Nations culture becomes built into their students’ learning.

Governor-General David Hurley spoke powerfully of the essentially inclusive nature of the project – bringing us together as Australians in a multi-cultural society – as he introduced the first Indigenous woman Member of Parliament, Linda Burney, to officially launch NEO-Learning.  She spoke of her own work teaching, and then in advocacy and curriculum development for Aboriginal Education, remembering her own experiences when young, of being made to feel inferior, in the time when “Aboriginal” meant at best “primitive”, and at worst meant to be massacred, as the Yaburara had been in 1869.

Though she spoke more briefly than she had intended – because the enthusiasm of previous speakers had let time get away – I thought of the great contrast between the treatment still of Indigenous people in the “justice” system, and of the explicit racism I have seen in many places on my travels around Australia, compared to the dictum provided to us by Scott Rankin

It’s harder to hurt someone if you know their story.  And even harder if you join with them in the art of story-telling through NEO-Learning. 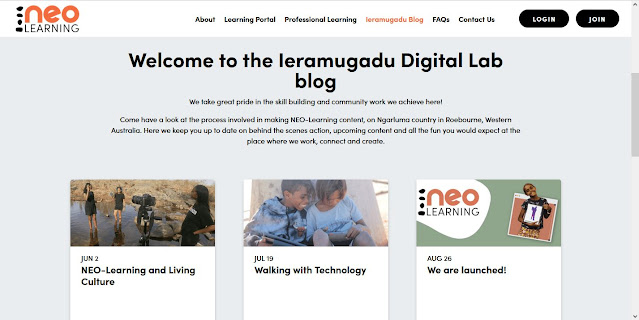