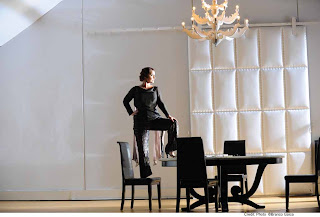 Staging a Handel opera seems to be a very effective way of clearing out an opera house, judging by the progressively greater number of empty seats after each interval at the performance I attended of Opera Australia's production of "Partenope".

Perhaps those audience members were remembering director Christopher Alden's last effort at the Opera House, the execrable "Tosca", and had decided that as they could'nt make head nor tail of the proceedings onstage they might as well dash home in the hope of finding something more edifying on the TV.

Actually, those of us who had attended the entertaining free pre-show talk by assistand director, Tama Matheson, were reminded that in the eighteenth century, when Handel wrote this opera, the presentation style was very much different to how opera is presented now, and that "Partenope" was not really written as a narrative opera. Therefore Christopher Alden and his co-director Peter Littlefield had devised this concept to make it more interesting. So, Voila! armed with this knowledge, I decided, after the first act, to simply stop trying to match the libretto with the shenanigans on stage and let Handel's glorious music wash over me as the cast went through their directorial hoops, and...... the results certainly were more entertaining.

While "Partenope" isn't the most accessible or sensible of the Handel operas - (Come to think of it... Is there such a thing as a sensible Handel Opera?) - it does contain some glorious music, here, beautifully played by an orchestra which achieved exactly the correct sound and balance under Christian Curnyn, and this production does have a superb ensemble of singers who do the music proud,  headed by a very game Emma Mathews, as Partenope, with Kanen Breen (Emilio), Christopher Field (Armindo), Jacqueline Dark (Rosmira), Richard Alexander (Ormonte), and Sian Pendry, who at the performance I attended, was replacing an indisposed Catherine Carby, as Partenope's lover, Arsace.

Set in the late twenties, in a decadent world of stark white apartments, Man Ray photography and sparkly cocktail dresses, the production contains many undeniably memorable moments. Indeed images of Emma Mathews, outfitted in top hat and tails, energectically seducing Christopher Field while firing of sparkling cadenzas in all directions, Sian Pendry sitting on a lavatory shredding endless rolls of toilet paper, and Kanen Breen delivering an intricate aria while performing some amazingly outrageous yoga moves, will stay with me for a long time.There are some genuinely funny bits of business, which,to their credit, the cast embraced with enthusiasm and spirit while still managing to sing beautifully, in fact, even sublimely, in the case of the meltingly lustrous solo with which Emma Mathews closed the second act.

But while I rather enjoyed the night out, please Opera Australia, next time you produce a Handel opera, can we have a production closer to what Handel intended?

(This review was broadcast in "Dress Circle" on Artsound FM 92.7)
Posted by Canberra Critics Circle at 2:05 PM