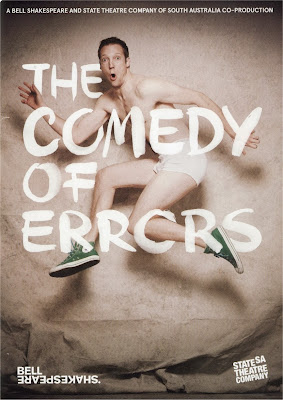 Shakespeare’s early play, ‘The Comedy Of Errors’, is a slight work that, if done traditionally today, would not offer much to interest a modern audience.

Bell Shakespeare’s jazzy new production is played with only ten actors on a simple set designed by Pip Runciman of eight double doors stretching across the stage with changing electronic signs above them to tell us where we are.  It’s certainly different to any other version of the play you might have seen.

Director, Imara Savage, states in the program, “I was hoping to capture something of the feeling of a night out, those nights where we stay out until the sun comes up and in the cold light of day we are able to see everything for what it is.”  If that’s what she was aiming for, it wasn’t clear enough.

The play is a simple bit of fun about two sets of twins who get mistaken for each other and cause great confusion until all is resolved at the end of the play.  Unless you’d seen the play before, this tricky production obscures the storyline so much that it’s hard to work out who everyone is and what is going on.  The modern day costumes add to the difficulty.  Except for the courtesan, the costumes give no clear visual clues about who each character is supposed to be.

In this production, the delivery of the words has been given less importance than the physical comedy.  However, there are some well-played moments of inspired lunacy, especially a sequence involving a washing machine.  The use of slow motion at various points in the play was imaginative and the eight double doors gave good opportunities for farcical entrances and exits.  Scene changes flowed very well with the help of the clever lighting design by Mark Pennington.

One difficulty when staging this play is finding actors who closely resemble each other to play the two sets of twins.  Luckily, this was achieved rather well in this production.  The standout performance of the evening was Renato Musolino as the servant, Dromio of Syracuse, who was extremely funny in the physical comedy but never lost sight of his character or its Shakespearian origins.  Everyone else played their roles at such a fevered pitch, there was no real character development and the constant shouting was a bit wearing.  The longer speeches were delivered as if they were just something to be got through with no depth or feeling for the language.

You can certainly find a lot to amuse you in this production, but it doesn’t really have much to do with Shakespeare.