TRIPTYCH - A TRILOGY OF WORKS 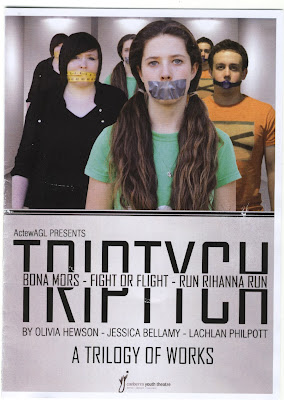 An evening of three one act plays is a rarity these days.  Canberra Youth Theatre’s “Triptych” considers the themes of expectation, pressure, success and fears that come along with the transition periods in young people’s lives.

None of the plays take a straight forward approach.  The first, “Bona Mors”, performed by pre-teen actors, is a surreal black comedy focussing on the fear of death and the loss of a brother.  The second play, “Fight Or Flight” shows the interaction of a group of young teens struggling to come to terms with a devastating event that might mean the end of civilization and “Run Rihanna! Run!” shows the pressures on two young men driving a truck away from a coastline slowly disappearing under water.

The first play worked best and the quite young cast displayed a surprisingly good understanding of the surreal aspects of the script.  The second play lacked pace, energy and voice projection from the cast and, having made its point early, overstayed its welcome.  The third play started with a nicely edgy idea and was well-acted but had an unsatisfyingly abrupt ending.

There were three substantial sets by Cate Clelland that worked fine for each play, but necessitated herding the audience out of the theatre for nearly 30 minutes between plays so the set changes could be made.

It was good to see three casts of different age groups tackling these quite unusual plays, but maybe youth theatre could work on less depressing and bleak subject matter sometimes.