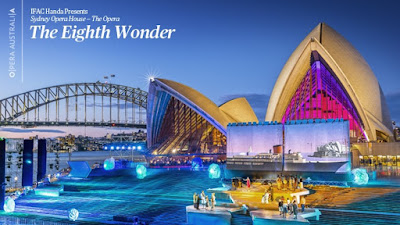 The timing could hardly have been better following on the findings of the National Opera Review, because if any example were needed, it would be difficult to surpass this production as a compelling demonstration of Lyndon Terracini’s professed commitment to innovation and new technology in the presentation of opera, and Opera Australia’s ability to rise to the challenges.

“The Eighth Wonder”, now rather confusingly retitled “Sydney Opera House – The Opera” was premiered in the Sydney Opera House in 1995, and revived again in 2000. The opera encapsulates many of the real events, and personalities involved in the construction of this flawed, but much-admired masterpiece. It also contains a second plot which provides the human element, telling of a talented young singer with an ambition to sing in the opera house, but torn between her teacher’s advice to sacrifice all to further her career overseas, or to marry her fiancé and continue her career in Australia.
Capitalising on the experience gained staging the Handa Opera on the Harbour events, Opera Australia has conceived this magnificent new production on an epic scale, presented in the open air, on the monumental forecourt steps of the Sydney Opera House itself, with the building itself looming over the production, a character in its own right.
A major innovation which makes this possible is the introduction of personal headphones for each member of the audience. These headphones allow the singing and orchestrations to be heard with stunning clarity. They also allow effects like the buzzing of blowflies, or the crackling of the barbecues cooking to be integrated into the soundscape. While some may need to reconsider their coiffures, it’s an idea which works brilliantly.

David Freeman’s masterful direction allows both storylines to flow clearly and compellingly, sweeping the opera along in a way that is absolutely captivating.

Though referred to in the cast list as The Architect, The Premier, The Politician and The Queen, anyone with even a passing knowledge of the real events will have little trouble in identifying the real life characters on which the roles are based. Clever use of actual historical photos and video create the impression of watching a documentary as actual incidents are recalled.
Alan John’s score is richly atmospheric, dramatic and tuneful. Anthony Legge’s conducting carefully delineates the lush orchestrations, soaring duets and rousing choruses, while the headphones insure that none of Dennis Watkins amusing lyrics, written in the Australian vernacular, are lost.

Don Potra’s design, enhanced by Trent Suidgeests impressive lighting design, provides plenty of spectacle without dwarfing the performers. The six large stages, shaped to resemble the tiles which cover the opera house sails, glide gracefully back and forth across the steps of the vast forecourt, allowing the opera to flow seamlessly.

Clever use of props, video projections, both realistic and cartoon, projected onto giant blow-up backgrounds, and bold, colourful costumes, capture the period and locales as varied as construction sites, a suburban backyard barbecue, offices and even the royal yacht Britannia.

The singing through-out is spectacular, especially from Danish tenor, Adam Frandsen, who makes a memorable Opera Australia debut with his passionate singing and acting as The Architect. He receives strong support, from Martin Buckingham, (The Premier), David Greco (The Engineer), Samuel Dundas (The Politician) and Adrian Tamburini (The Maestro).

Stacey Alleume succeeds superbly as the young soprano torn between her husband and her career ambitions, while Michael Petruccelli as her unsupportive young husband and David Parkin as her ocker father, both create memorable characterisations. Gerry Connolly provides some laugh-out-loud moments with his well-honed turn as a rather dowager queen.

“The Eighth Wonder” celebrates an achievement of operatic proportions.  Opera Australia has created a production that does both the opera and the achievement proud. Although site- specific, it’s a production which should be relished by as many Australians as possible. Hopefully this season will be the first of many revivals to allow that to happen.
Images by Prudence Upton.