THE VICAR OF DIBLEY 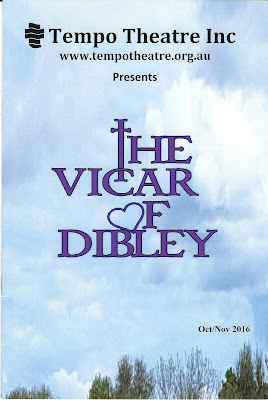 Tempo Theatre’s production of “The Vicar Of Dibley” is a stage adaptation of the popular TV series that ran from 1994 to 2007.  It is set in a fictional small Oxfordshire village called Dibley, which is assigned a female vicar following the 1992 changes in the Church of England that permitted the ordination of women.  The reaction of the staid members of the church committee and the rustic townsfolk forms the basis of the comic situations that unfold.

Adaptations of TV shows for the stage like this one give audiences exactly what they want – an evening with characters they’ve grown to love over a long period.  Jon Elphick has directed the show in a straight forward manner, keeping the pace up and allowing his cast every opportunity to present a vivid set of amusing characters.

Karyn Tisdell dominates the show as the vicar, Geraldine Granger, capturing the warmth and humour of this woman very well.  Kim Wilson is very funny as the pedantic committee chairman, David Horton, and is matched every step of the way by Tony Cheshire as the even more pedantic Secretary, Frank Pickle.

Marian Fitzgerald gives a delightfully wicked performance as Mrs Letitia Cropley with her horrific recipes and deftly plays the church organ interludes as well.  Jason Morton’s comic timing gets him some of the biggest laughs as the coarse-mannered farmer with marriage on his mind, Owen Nesbitt, and Jon Elphick is terrific as the dithering Jim Trott.

As the young lovers, Sam Kentish gives a nicely comic performance as the inexperienced lover and Tessa Franceschini almost steals the show with her excellent performance as the dim-witted, Alice.  Cheryl Browne and Garry Robinson give good support in two very small roles.

The audience at the opening night gave the cast a rousing reception.  I have never seen the TV series but, with a bit of eaves-dropping at interval, I ascertained that audience members felt that the cast were successfully capturing the essence of the TV characters and situations.

Whether you know the TV series or not, this is an enjoyable show with some great laughs.

Len Power’s reviews are also broadcast on Artsound FM 92.7 ‘Artcetera’ program from 9.00am on Saturdays.
Posted by Canberra Critics Circle at 9:56 AM